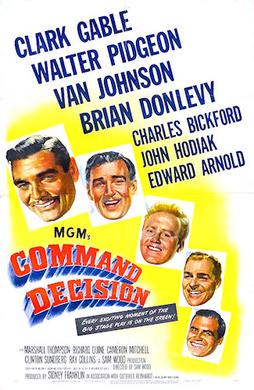 There are two war movies that deal with leadership of WWII bomber squadrons. “Twelve O’Clock High” deals with the stress of reforming an underperforming unit. Col. Savage (Gregory Peck) comes in and cracks the whip which results in at first rebellion and eventually respect. The tough love has the desired effect of restoring pride and discipline to the unit. The effort causes Savage to suffer a nervous breakdown. See my full review at Twelve O'Clock High
“Command Decision” gives a bigger picture than “Twelve O’Clock High”. It examines the strategy of daylight bombing and questions about whether the losses were worth the results. Brigadier General Dennis (Clark Gable) has to deal with the stress of ordering missions that lead to heavy losses of B-17 bombers. He commands an entire bomber division, but his headquarters are with a bomber group and the movie concentrates on this unit. Meanwhile, he has to deal from pressure from the press, from the brass above, and from a congressional committee.

The film takes place almost completely at the command level. There are no air combat scenes like in “Twelve O’Clock High”. Dennis is similar to Savage in that he is a hard ass and is very brusque. His men do not think he cares about them. In particular, a pilot named Jenks refuses to fly because he is “not going to get killed to make your record”. He is also getting grief from above. He is visited by his superior Gen. Kane (Walter Pidgeon) who is accompanied by Gen. Garnet (Brian Donlevy). Kane wants him to ease off to assuage the press and Congress. This differs from Savage’s dilemma since he had the backing of his superior.

Both movies show their protagonists having to deal with the smaller picture. Dennis at one point tries to talk down a damaged bomber which ends up crashing and burning. For the most part, “Command Decision” stays on the operational level. When Dennis’ unit accidentally bombs the wrong target, Kane wants to spin it as helping the Navy by bombing a torpedo plant. He also wants to put a hold on Operation Stitch which is halfway toward destroying Germany’s jet fighter program, but is resulting in heavy losses. Dennis insists on carrying on and hearkens back to the unjust treatment of Billy Mitchell’s precision bombing strategy after WWI. Dennis gets Kane to continue the operation by threatening to out Jenks (whose uncle is on the congressional committee).

The next mission of the operation is led by the bomber group CO and good friend of Dennis and Garnet, Col. Martin. Before the mission, he learns he is going to be promoted and he has a baby on the way. Of course, that makes him dead meat. When Dennis insists on going after the last target in spite of heavy losses including Martin, Kane relieves him and replaces him with Garnet. Will Garnet change the missions to “milk runs” for the short-term benefit of lower losses or continue Operation Stitch for the long-term benefit of shortening the war?

“Command Decision” does a good job of reviewing the arguments for and against daylight precision bombing. It is a lot of talk and some of it is repetitive. The role of the press, the brass, and Congress are portrayed accurately, but melodramatically.

Compared to “Twelve O’Clock High”, which it preceded by one year, it is an inferior movie. The Dennis character is less believable than Savage. Both leads do a god job, but Peck has the stronger performance. The supporting cast in “High” is also better. “Command Decision” is not as much of a psychological study and thus is less interesting. It has more of a top down perspective and the air crews are not really part of the focus other than being pawns.