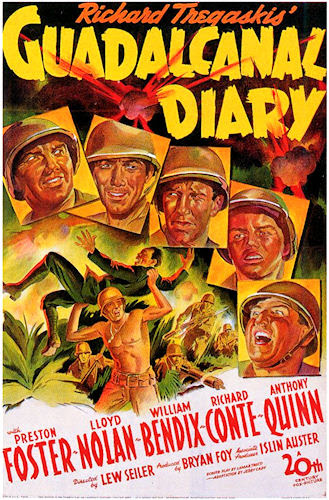 BACK-STORY: “Guadalcanal Diary” is the rare war movie made during a war that is not laughably propagandistic and unrealistic. In fact, it was probably the first American-made realistic war movie to come out during WWII. It helps that it was true to its source. The film is based on the famous book by war correspondent Richard Tregaskis. He was with the Marines on Guadalcanal so he was eye-witness to the events depicted. The movie came out within a year of the victory in the Solomon Islands. The producers expressed their appreciation for the Marines, Army, Navy, and Coast Guard, but the movie is dominated by the Marines. The credits are backed by the Marine Corps Hymn. The movie stars many recognizable faces including Richard Jaeckel in his first role.


OPENING: A narrator tells us we are on a troop transport somewhere in the South Pacific. A Mass is taking place and Marines are singing hymns. God is on our side. There is the usual scuttlebutt and chatting among the leathernecks. The talk is realistic, but of course G-Rated. They are not sweating in spite of the tropical heat.

SUMMARY: We go below decks (still no sweating) and the quarters are spacious. The scene is reminiscent of “Thin Red Line” except with the cheesy narration. The chatter continues to be appropriate for their home front mamas to hear.

The transports hook up with their escorts. Some of the footage is actual combat footage which is a plus. Sgt. Malone (Lloyd Nolan) preps them by describing their mission which is to take an airfield. We hear the usual wisecracks. Capt. Cross (Roy Roberts) shows off a picture of his wife (cliché alert). The unit we will follow into combat is heterogeneous with an Irish Catholic priest, arrogant New Yorker, baby-face, tough NCO, feisty Hispanic, etc. No new ground broken here.

August 7, 1942 – “the great day itself”. The men nervously wait to disembark. They clearly care a lot about each other. No dysfunction in this group. This ain’t “Platoon”. There is footage of the bombardment of the island, but it lasts an unrealistic few minutes before they land. The landing is uncontested. They reach a village without any contact other than taking three prisoners. The Japanese are referred to as “monkeys”, but our medics humanely treat them. We are the civilized ones, after all.

The airfield is taken without a fight. One guy brags and bets “there isn’t a Jap within a thousand miles of here!” Guess who is soon after killed by a sniper? They dig in (still no sweating) and sing as they do it. Did all movies made in the 40’s have singing? As of August 13, there has still not been any contact.

We finally get some action when Capt. Cross is sent with a squad to capture some Japs who are ready to surrender. A Jap sub opens up on their craft, but a shore battery sinks it. They walk into an ambush. The dastardly Nips were lying. The Marines die bloodlessly. Cross dies clutching the photo of his wife, naturally. Only Alvarez (Anthony Quinn) escapes into the surf to report the atrocity.

It’s payback time as they go after the Japs through jungle that looks more like a forest. There is a realistic mortar barrage followed by a charge. They show no mercy because “those ain’t people”. One soldier uses Sgt. York’s turkey gobble technique to get a sniper to reveal himself and it’s “scratch one squint-eye”. They are veterans now and look the part as they return.

At mail call, one gyrene does not get a letter from home and is crestfallen – come on audience, write to your boys! The airfield is bombarded, but again the timing is too short. Here is a typical exchange: “Since when did you start smoking cigarettes?” “I’m starting right now.” On Oct. 10, the Army arrives. They are welcomed with open arms. We all know how much the Marines and Army love each other. I guess it would have been different if there was a bar for them to meet in.

Now the fighting evolves into ferreting out the remaining Japanese. A good scene has Malone and Potts (William Bendix) using grenades and a satchel charge to blow up Japs hiding in a cave. An Oct. 13 naval bombardment sends them diving into bunkers. The bombardment is intense and noisy. One character is given the privilege of saying “anyone who says he ain’t scared is either a fool or a liar”. Well, someone had to say it. Potts makes a “there are no atheists in foxholes” speech which is kind of corny, but heartfelt.

The night before the last battle, the soldiers sit around singing “Home on the Range” (they sang in “Platoon” too as I recall). Some of the men write letters home and we hear what they write. Nice touch.

The final battle is a frontal charge firing from the hip. The usual throw your arms up in the air as you go down deaths. They are supported by Stuart tanks. The Japs run into the surf and are slaughtered without mercy because they don’t deserve it. This is a good action scene.

CLOSING: On Dec. 10, their last day, they march off with smiles on their faces. Mission accomplished. One squint-eyed monkey infested island down.

WOULD CHICKS DIG IT? It would be inadvisable to subject your significant other to this movie unless she really likes old school war movies. There are no female characters. It is a very male movie. The leads are attractive in a 1940s way. The language and action are not graphic so there is nothing offensive in it. Heck, watch it with your grandma. She can tell you how much of a crush she had on William Bendix (the George Clooney of that day).

ACCURACY: The movie is fairly accurate for a war movie made almost current to the events it is covering. It is faithful to the book and as such offers more of a depiction of events in Tregaskis diary than a tutorial on the Battle of Guadalcanal. We learn what this particular unit went through, but get a hazy picture of what happened strategically on the island once we get past the first week. That first week is accurately depicted. The landing was unopposed and the airfield was taken easily. A modern movie would probably jazz up the action, but you could not get away with this in 1943. The audience would have been familiar with the basics of the battle.

The accuracy breaks down after the first week. For instance, you get none of the major Japanese assaults on the airfield perimeter at night. These intense banzai charges were probably beyond the ability of the director to accurately depict. Even if Tregaskis’ unit did not have to fight off one of these suicide attacks, some reference could have been made to them. The movie gives the impression we were never on the defensive and hard pressed during the battle. It definitely downplays the tactical and environmental problems the troops faced in a tropical jungle against fanatical soldiers. But then again, do we really need to see the epidemic of dysentery?

The American equipment is accurate. The Marines are armed with bolt-action Springfields, instead of M-1's which had yet to be issued. Stuart tanks were also used in the jungle terrain. Not surprisingly, the Japanese soldiers use American weapons. No complaint there.

The scene where the squad under Capt Cross is ambushed is an accurate relating of a famous incident in the battle.

One thing that is accurately cringe-inducing is the overt racism toward the Japanese. This would not have shocked a 1940s audience and reflects the attitude of not just the Marines but the American public. In a bizarre reversal, the G-Rated comments about the apelike and slant-eyed Japs would not be allowed today.

CRITIQUE: “Guadalcanal Diary” is very much a product of its times. It was probably the most realistic and accurate war movie made up until that time. Because it cinematically reproduces a very popular book, it was constrained in how much over the top adrenalin-fueled action it could show. In some ways this makes the movie disappointing to many war movie fans. Most war movie fans are not interested in seeing the actual ratio of combat to downtime. You have to give the producers credit for sticking to what the men actually went through

The movie is cliché –ridden and some of it is embarrassing now, but perhaps not back then. It is more excusable to have a variety of stock characters in a small unit movie in 1943 than in a 2011 movie, after all. I’m pointing the finger at you “Battle: Los Angeles”. Maybe when the captain shows off his wife’s picture the people in the theater did not nudge each other and say “dead meat” in 1943.

The acting is tolerable. The dialogue is your great grandma’s version of how soldiers talked. It has its humorous moments or what passed for humor in 1943. The action scenes are actually pretty good. Just don’t expect to see blood splatter or the bayoneting of wounded Japanese.

CONCLUSION: I am beginning to realize that the panel for the Military History magazine’s 100 Greatest War Movies defined great as partly historically important. That would be the only way to explain the ranking of this movie. Admittedly, it was ground breaking for its time since it covered realistically our first ground victory in the Pacific. It does a good job covering a best-selling book. However, I have read the book and would have to say it is pretty boring. It is overrated and so is the movie based on it. Few viewers under age 60 would find it exciting. Before you excuse its obvious clichés, remember these clichés were old even for a movie made in 1943. After all, there were plenty of WWI movies that had established the heterogeneous unit cliché, for instance. These clichés were probably comforting for an audience in the 1940s, but they seem silly today. I am no fan of “The Thin Red Line”, but it certainly is a better movie about Guadalcanal. But to really see how far we have come, watch the episode of the miniseries “The Pacific” that deals with John Basilone and then try to convince me that “Guadalcanal Diary” is the 69th greatest war movie.
Posted by War Movie Buff at 9:13 PM