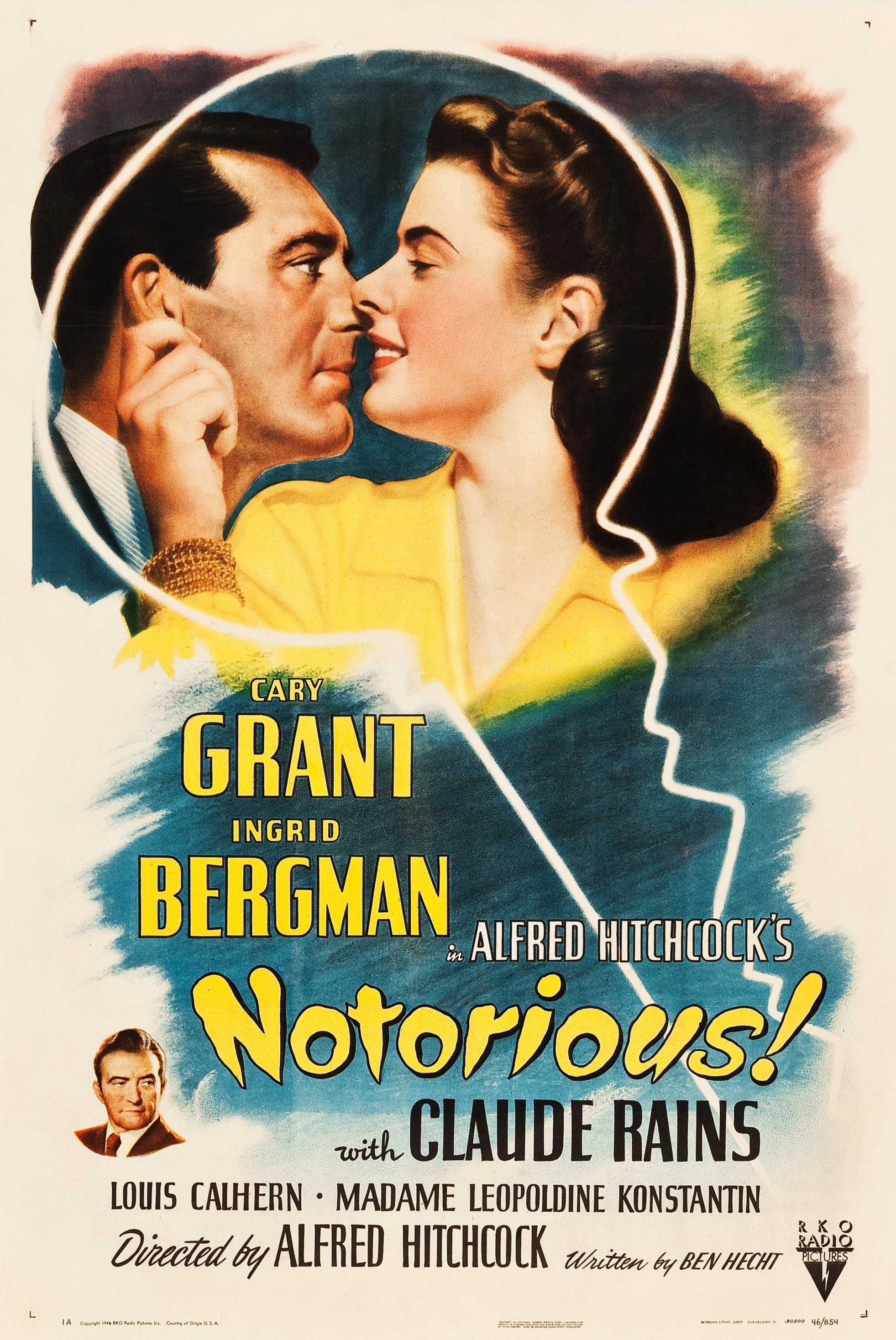 BACK-STORY:  “Notorious” is a classic Hitchcock film released in 1946.  It was shot in crisp black and white and has many of the iconic Hitchcock touches.  It was one of four movies where Hitchcock teamed with Cary Grant and his second picture in a row with Ingrid Bergman (the first was “Spellbound”).  The film was a big hit and was nominated for two Academy Awards – Claude Rains for Best Supporting Actor and Ben Hecht for Best Original Screenplay.  Leopoldine Konstantin (Rains’ mother) made her only appearance in an American movie.  She was actually only four years older than Rains.  Another problem that the magic of movies handled was Rains being several inches shorter than Bergman.  This was overcome with ramps and elevator shoes so well that in the movie Grant and Rains appear to be the same height.  The use of uranium for an atomic bomb as the MacGuffin the plot needed supposedly was prescient by Hitchcock and Hecht and got Hitchcock tailed by the FBI for a while.  The movie has a famous two and a half minute kissing scene where Hitchcock circumvented the Production Code rule of maximum of three seconds of lip-locking by having Grant and Bergman nuzzle between smooches.  This actually works on film.
OPENING:   Alicia Huberan (Bergman) is the daughter of a Nazi spy who commits suicide after a guilty verdict in a Miami court in 1946.  Alicia is a playgirl who is trying to escape her familial shame through affairs and booze.  An FBI agent named Devlin (Grant) is enlisted to recruit her to infiltrate a nest of Nazi friends of her father who are up to no good in Rio De Janiero.
SUMMARY:  Alicia reluctantly agrees to the incredibly dangerous mission.  To complicate matters, she and Devlin fall in love (rather quickly).  The mission is for Alicia to cozy up to her old boyfriend Sebastian (Claude Rains) who is the leader of the gang.  Since he has fallen in love with Alicia, Devlin is torn between duty and love.  Being a patriotic agent, he chooses duty but is quite petulant about it.  To hide his true feelings and to harden Alicia to her task, he coldly treats her like a loose woman.  The underlying tension is that he wants her to back out of the assignment and she wants him to ask her to back out.  As my wife would say, they were not communicating their feelings.  Good thing, otherwise we would not have had this movie.  Here is a sample of their non-communicating:

Devlin: I can't help recalling some of your remarks about being a new woman. Daisies and buttercups, wasn't it? Alicia: You idiot! What are you sore about, you knew very well what I was doing! Devlin: Did I? Alicia: You could have stopped me with one word, but no, you wouldn't. You threw me at him! Devlin: I threw you at nobody. Alicia: Didn't you tell me what I had? Devlin: A man doesn't tell a woman what to do; she tells herself. You almost had me believing in that little hokey-pokey miracle of yours, that a woman like you could change her spots. Alicia: Oh, you're rotten. Devlin: That's why I didn't try to stop you. The answer had to come from you. Alicia: I see. Some kind of love test. Devlin: That's right.
Ouch!

Sebastian has always been in love with her and falls under her spell with little effort on her part.  He even defies his creepily domineering mother who is immediately suspicious of this competitor for her son’s affections. Alicia secretly meets with Devlin and their conversations are venomous as each lets their bitterness flow.  But there is a job to do and Alicia reports a strange incident involving a wine bottle that may be a clue to what the Nazis have up their sleeves.
Alicia marries the blushing groom and takes residence with the mother-in-law from Hell.  Devlin convinces her to host a grand party so he can have access to the wine cellar.  And, oh by the way, can you get the key from Sebastian?  In the wine cellar, Dev and Alicia discover that some of the bottles have uranium in them (what food would that go with?).  They are almost caught by Sebastian and only a steamy fake kiss fools him.  However, Sebastian pieces together several clues to figure the love of his life is betraying him. It’s time to enlist the aid of mommy and endure the I-told-you-sos.  Mom’s solution is to slowly poison Alicia through her daily coffee.
CLOSING:   Alicia looks increasingly bad at her meetings with Devlin until finally she is bedridden and on her way out.  Dev gets suspicious and barges in to see her.  He rescues her right under the noses of the perplexed Nazis (who of course have not been told by Sebastian that he allowed a spy into their gang).  Sebastian wants to go with Dev and Alicia because his friends are not going to be happy with someone who now has cooties, but Dev is unsympathetic and decides apparently that having a potential Nazi stool pigeon in FBI custody is not a good idea.
RATINGS:
Action – none
Acting – 9 ( even Alfred who does a great job downing a drink at the grand party )
Accuracy – not applicable
Realism – 5
Plot – 7
Overall -  6
WOULD CHICKS DIG IT?  Did I mention it has Cary Grant in it?  Nuff said.  The love story is sizzling and the dialogue is crackling.  There is a lot of chemistry between the leads.  It is edge of your seat suspenseful at times.  Your girl might even clutch your arm at times.  However, you’re likely to also get punched in that arm with comments like “You men are all alike” when there are scenes of Dev being mean to Alicia because he can’t reveal his true feelings.  Guys, if your wife has mother-in-law issues, this movie is bound to make your mother look pretty damn good.
ACCURACY:   Obviously, “Notorious” is not based on a true story so accuracy is not an issue.  It is true that some Nazis did escape to places in South America like Rio, but there is no evidence they were working on an atomic bomb.  This part of the plot is actually a little silly.  What exactly were these Nazi’s going to do with their wine bottles full of uranium?  Don’t think on this too much.  Nazis + uranium = bad
CRITIQUE:    I am a big Hitchcock fan, but I have to swim upstream and state that I do not think this is one of his best films.  It is well written and well acted.  It has its moments of standard suspense.  For example, the “will they get caught in the cellar” scene.  Nothing special there.  The rescue is anti-climatic, although leaving Sebastian behind to face his comrades is a nice touch.
The movie explores some interesting themes.  One of these is trust.  Devlin has a hard time trusting Alicia and Sebastian trusts her too readily.  Another is the theme of love versus duty.  Dev is torn between his love for Alicia and the mission of using her for national security.  He comes down on the side of the mission which makes the movie one of the first post-WWII espionage movies to emphasize the get your hands dirty nature of intelligence work.  Interestingly, the Cold War had not kicked in yet so Hitchcock was a little ahead of the curve on this dynamic.
By far the best reason to watch the film is the dialogue and acting.  The sparring between Alicia and Devlin is priceless.  Grant and Bergman are at the top of their games, but Rains is outstanding as well.  He portrays a sympathetic Nazi who ironically is more in love with Alicia than Devlin is.  He also has those terrible mommy issues that we can sympathize with.  You almost feel sorry for him.  He is a cultured, urbane Nazi sap.  As his mother, Konstantin is one of the great villains of filmdom.
CONCLUSION:   This is the second Hitchcock film on the list and it is even less of a war movie than “Foreign Correspondent”.  I have no idea what the panel was thinking here.  Even the loosest definition of war movie would not include this movie.  But the astounding thing is this movie is eight places higher than “Casablanca”!  How can that be justified?  No one in their right mind would argue that “Notorious” is superior to “Casablanca” as a film.  I doubt even Hitchcock would make that argument.  Given that fact and the fact that “Casablanca” is clearly more of a war movie than “Notorious”, how do we end up with these rankings?!