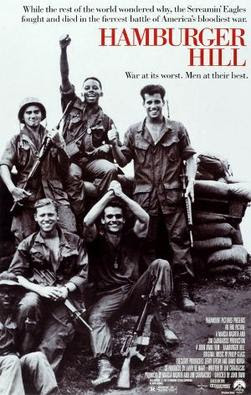 “Hamburger Hill” is a war movie about the famous Vietnam War battle.  It was released in 1987 and chronicles the 101st Airborne’s assault on Hill 937 in the Ashau Valley in May, 1969. The script was written by a “Screaming Eagles” veteran who served in Vietnam in 1968-69. The director, John Irvin (who did the stylistically similar “When Trumpets Fade”) had done documentaries in Vietnam. He cast a group of unknown actors, some of whom have gone on to big careers.
The movie opens with Company B evacuating the Ashau Valley with their tail between their legs. Five replacements (FNGs) arrive to the typical cold shoulders, but they quickly blend in. The movie fits squarely in the who-will-survive sub-genre. It is also a typical small unit dynamics film. It displays some similarities to "Platoon" in this respect except that the unit is not divided. The squad has some black/white issues, but realistic to a front line unit they are tamped down by the more pressing need for group respect for survival purposes. There are two sergeants like in "Platoon", but they are not adversarial. One is gung-ho (Worcester – Steven Weber) and the other is cynical (Frantz – Dylan McDermott), but they are best friends. There is also a green LT, but he is not a worm and does not figure in the film.

The first half of the film is basically a tutorial on the indoctrination of a “cherry”. The five FNGs are taught hygiene and to respect “Nathaniel Victor” (the North Vietnamese). They are taken to the local brothel. They quickly learn a second language – the grunt slang combined with Vietnamese phrases. The unit even has its own pet phrase – “It don’t mean nothin’”. (To be followed by “Not a thing”.) This phrase is said seventeen times in the movie. This dialogue includes most of the greatest hits of grunt slang. The movie should have captions for those who are not familiar with Vietnam War lingo, however.

The second half deals with the assaults up Hill 937. This is combat at its rawest followed by periods of down time for more camaraderie. Each post-assault scene has a defining moment. One of these is the tuning in to “Hanoi Hannah”. Another has Biletsky (Tim Quill) listening to a tape from his patriotic girlfriend (apparently the only pro-war civilian left in America). More typical of the film’s theme is a “Dear John” letter to Bienstock (Tommy Swerdlow) from an ex who has been brainwashed by hippies.  The film hammers away at the implication that the soldiers have been abandoned by the home front.

﻿﻿
The battle begins on May 11 and it is obvious from the start that few in the squad will survive. The movie covers the battle by days. The fighting each day is tragically similar. Frontal attacks uphill against a fanatical enemy who has the advantage of the high ground and bunkers. Although the full force of American firepower is brought to bear in the form of aerial and artillery bombardment (this is a loud movie), every assault except the last is thrown back. The deaths are brutal and graphic. Heads blown off, etc. Most of them are random and quick, but the medic “Doc” (Courtney Vance) gets an old school send-off that is well played. One of the assaults is memorable for its slog up the muddy hillside and the subsequent sliding back downhill by the men. Finally, the hill is taken in an “I’ve had enough of this shit!” charge. Our surviving three main characters sit exhaustedly under what’s left of a tree.  One of the survivors is Biletsky who two days earlier had been evaced for a serious wound.
﻿
﻿﻿﻿﻿﻿
﻿

HH is considered by some to be the best Vietnam War movie. It isn’t, but it is certainly in the top five. It is also lauded by many as the most accurate Vietnam War movie. It has a stronger claim to that title. The recreation of the battle is as close as you could ask for. It even has one (there were at least three) of the friendly fire by choppers incidents (although in reality the fire was rockets, not machine guns). Although you might assume the high casualty rate was Hollywoodized, the battle was actually very brutal and costly. Read about it and wonder if we would accept a repeat in Afghanistan. Irvin gets the sights and sounds right. One flaw is you get none of the big picture. What is the plan? Why this hill? What are the other companies doing? The movie also does not put a face on the enemy. They are obviously tough and worthy opponents, but that is all we know.  Another similarity to "Platoon".
The acting is satisfactory. One head-scratcher is the waste of the best actor in the group (Don Cheadle) in a small part. One thing you will notice is the compromise made on battlefield griminess. The men do sweat and have dirt on their faces, but nice hair. (Memo to the make-up artists: don’t touch the hair.) The actors relay what a screenwriter thinks a grunt would say, but you get the impression they do not understand all the phrases.  They're just mouthing phrases. The movie works best in this respect if you have not seen a lot of Vietnam War movies. I found some of the dialogue to be forced and cringe-inducing.
﻿

There are some clichés as is to be expected from a movie of this type. We get the “a fight breaks out because a guy make’s a sexual remark about a girlfriend picture”. However, the guy who showed the picture does not end up dying so that cancels it out. Unfortunately, someone violates the rule about bragging about their future plans with predictably dire results.
One thing that sets this movie apart from most other Vietnam War movies is it is anti-anti-war. There are several sledgehammer moments where the home front is crucified for not supporting the troops. In one piling on monologue, Worcester recounts a trip back home. 1. He had dog feces thrown on him by hippies. 2. His wife was screwing a pacifist. 3. His friendly bartender was being harassed as the father of a deceased “baby killer” and became a heroin addict. We get it! The proof of this thematic goal is the unbelievable lack of a post script explanation that after all the effort to take the hill, it was abandoned to the enemy. Since most of the audience would not have known this, the omission is a clear admission by Irvin of his political agenda. In this respect, it strays furthest from its cousin “Pork Chop Hill”.
“Hamburger Hill” is a good movie. Unlike most of its competitors (Platoon, Apocalypse Now, Full Metal Jacket), it deals with an actual battle. This makes its main rival “We We Were Soldiers”. In that respect, it does a better job on grunt life. The combat is not as good, however.

Cracker?  Probably.  It is much better than some of the crap I have had to watch.