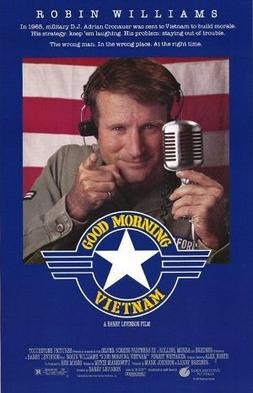 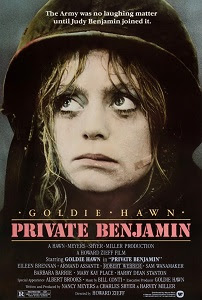 “Good Morning, Vietnam” (1987) is the story of a military disc jockey named Adrian Cronauer (Robin Williams). He arrives in Vietnam and immediately rocks the boat at the stodgy radio station. He plays rock n’ roll and makes hilarious comments and does comedy routines between songs. Off base he falls in lust with a Vietnamese girl and befriends her brother who turns out to be a V.C. operative. The relationships with the girl and her brother take some rocky roads which parallel his troubles at work.

“Private Benjamin” is the story of a Jewish princess (Goldie Hawn) who enlists in the Army after her husband dies on their honeymoon. She goes through boot camp under the disapproving scowl of Sgt. Lewis (Eileen Brennan) and miraculously comes out an elite soldier stationed at NATO headquarters. She ends up quitting the Army to marry a suave European and the movie builds to their wedding.

FIRST HALF: ACTING
“Good Morning, Vietnam” is a star vehicle for Williams and he dominates. It is one of his best performances. Although he is playing Cronauer, he is really playing himself (especially during the radio show scenes). His dramatic work is impressive. He was nominated for Best Actor. The supporting cast is strong. The other DJs are distinctive and fleshed out. Bruno Kirby does an unenviable job as the painfully uptight, humor-challenged supervisor. J.T. Walsh is slimy as the villainous station manager.

“Private Benjamin” is a star vehicle for Goldie Hawn. She was nominated for Best Actress. It is probably her best movie. Her performance is not as assured as Williams’and she does not have to stretch as much. Brennan was nominated for Best Supporting Actress and is solid. The rest of the cast is weak, however. The stock squad of misfits is second-rate and make little impression. Amazingly, P.J. Soles (“Stripes”) is in this movie as the suck-up.

“Good Morning, Vietnam” is a comedy/drama that blends manic schtick by Williams with a romance set in the decaying situation in the war. The drama parts are bridges between the stand-up comedy routines and are breathers from the humor. The movie is funniest when Williams is on the air, but laughs are dependent on how much you like Williams’ style. He appears to be ad-libbing a lot and the jokes are hit-or-miss. Of course, he is made out to be the most hilarious person in Vietnam. In the dramatic section, Williams’ throws in snark to keep the comedy flowing, but most of those scenes are pretty serious and sometimes depressing.

“Private Benjamin” is a service comedy in the first half and a tale of female empowerment in the second half. Hawn is very funny as the clueless rich girl who has to adjust to boot camp, but when she suddenly becomes a model soldier rather than fulfill her father’s condescending attitude, the laughs come to a screeching halt. The courtship with Henri (Armand Assante) is humorless and predictable. You wait for the inevitable ending while squirming.

GMV is #100 on AFI’s list of greatest comedies and PB is #82. I can live with GMV being included in the top 100 because it has an interesting take on the Vietnam War circa 1965. It even presents a balanced view of the Viet Cong. The blending of comedy with romance and drama is more quality-consistent than PB. PB is very overrated. It starts strong, but wilts after that. The only laughs come from Hawn’s whiny reaction to boot camp. The romance with Assante is painfully unfunny. In fact, the second half ceases to be a war movie when Benjamin drops out of the Army and returns to her previous life (only now she is empowered!). GMV is funnier and a better movie.