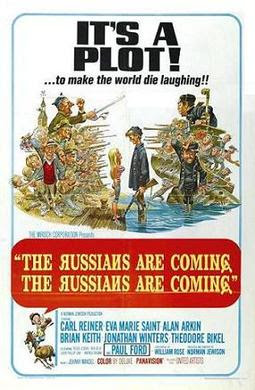 
“Duck Soup” is the Marx Brothers’ manic send-up of war and the governments that provoke them. It was released in 1933 and is now considered their greatest work. Groucho plays Rufus T. Firefly, the leader of Freedonia. He is more interested in getting at rich widow Mrs. Teasdale’s fortune and goading his rival, the ambassador of Sylvania. Chico and Harpo are spies employed by the ambassador. There is not much of a plot, but it leads to war.

“The Russians Are Coming, the Russians Are Coming” is a Cold War comedy directed in 1966 by Norman Jewison. It is a satire of Cold War relations and small town life. A Soviet sub runs aground off an American island. Rumors spread among the rubes and the public panics. Meanwhile, the sub’s executive officer (Alan Arkin) and a squad attempt to steal a yacht to extricate the sub. There is a chaste courtship between a Russian sailor and an American girl. All the running about and shouting leads up to a tension filled Mexican stand-off that is diffused by a crisis that requires the two sides to cooperate.

“Duck Soup” is a tale of two sets of actors. Groucho (Firefly), Chico (Chicolini), and Harpo (Pinky) are in top form. Margaret Dummont gamely recreates her usual butt of Groucho’s insults and Louis Calhern (Ambassador Trentino) is satisfactorily pompous and scheming. Everyone else is second rate (although Trentino’s vampish girlfriend is sexy, especially for a 30s movie). Zeppo is his usual wooden self playing Firefly’s aide named Bob Roland (he couldn’t even get them to give him a ridiculous name?). The whole movie depends on your tolerance for the “acting” of Groucho, Chico, and Harpo (especially).

“The Russians Are Coming…” has a cast of recognizable, but mostly unnamable character actors. The secondary cast is straight out of a 1960s Disney movie. The leads are strong. Alan Arkin as Rozanov won the Golden Globe and was nominated for the Oscar. It was a star-making turn. Carl Reiner as a writer whose family is held hostage is okay, Brian Keith is sufficiently gruff as the police chief. Jonathan Winters plays his usual character (goofily incompetent) as a deputy.  The rest of the cast could best be described as comforting.

“Duck Soup” is ranked as #5 on AFIs list of 100 Greatest Comedies. That is way too high. The plot is weak and the movie is basically an excuse for Groucho’s nonstop one-liners (a very bad drinking game - drink everytime Groucho says a sentence that is not a joke), Chico’s silly wordplay and puns, and Harpo’s physical comedy. Many of the jokes fall flat, but there are so many of them that you get a lot of good laughs. The movie means to be satirical, but some of it seems to be unintentional. It is hard to believe the Marx Brothers intended for the movie to have the deeper meaning that critics attribute to it. It has some classic scenes (e.g., the mirror scene), but also some cringe-worthy song and dance numbers. The final scene in the farmhouse is a pretty hilarious, but silly lampoon of war.

“The Russians Are Coming…” is an amusing, but not funny movie.  Do not fear.  The poster is wrong - you should have no fear of "dying laughing".  I seldom laughed. It is well-meaning and painfully liberal. This probably explains the hard to believe Academy Awards nominations for Best Picture (!), Best Actor (Arkin), and Adapted Screenplay. It won the Golden Globe for Best Musical or Comedy. It tries hard to thaw relations between the superpowers. Contrast that with the biting satire of "Dr. Strangelove" and it comes off as lame. For example, there is a running gag of the town drunk chasing a horse so he can reenact Paul Revere’s ride. Many of the characters are buffoonish small town hicks. The Russians are just like us. Why can’t we just get along? Not mirth-making material.

Both of these movies are overrated. The difference is the reputation of “Duck Soup” increased after its disappointing opening run and it remains solid as a classic. ”Russians” was highly thought of when it was released because people wanted to like it. It does not hold up well except as a curio. “Duck Soup” is messier and manic, but without a doubt funnier.