This year's March Madness tournament will determine the Best War Comedy of all time.  I am limiting the field to American movies.  I chose the movies based on my knowledge of war movies, various lists on the Internet (like the American Film Institutes list of 100 Best Comedies), and input from war movie lovers.  Once I narrowed the list down to 16, I seeded based on their ratings on Rotten Tomatoes.  Each round will compare the movies on two criteria.  The first round will use Acting and Humor.  I will watch all 16 in the next few weeks.

Here is the bracket: 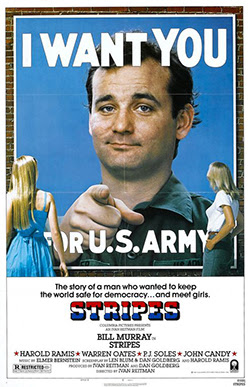 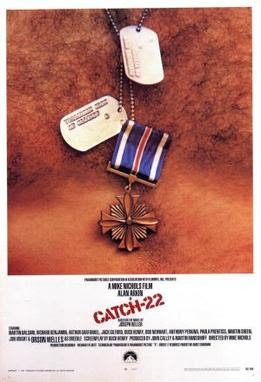 BACKGROUND:
“Stripes” (1981) is a boot camp/adventure comedy starring Bill Murray. He plays a loser named John Winger who enlists with his best friend Russell (Harold Ramis). They go through boot camp under Sgt. Hulka (Warren Oates) and by miraculously overachieving at graduation, their unit is given the mission of protecting a militarized RV. John and Russell steal the RV to go on a tryst and the rest of the unit gets captured behind the Iron Curtain going to get them.


“Catch-22” (1970) is the retelling of the famous book by Joseph Heller. The main character is a WWII bombardier named Yossarian (Alan Arkin). He wants out of combat, but because he is sane enough to know that he is crazy to go on the missions that proves he is not crazy (a dilemma called “Catch-22”). The movie follows several of the pilots on base and off. The incidents are layered over the creation of a syndicate run by Milo (Jon Voight) which turns their war into a business enterprise.


“Stripes” is a star vehicle for Murray and he is at his snarky best. His character is pretty much an asshole and yet Murray makes him likeable. He is ably served by Ramis who makes a great straight man and does some funny takes. Oates (like Palance in “City Slickers”) is perfect as the drill sergeant and does not allow the character to be lampooned. The heterogeneous unit is populated by comic stereotypes that the supporting cast (especially John Candy as Ox) handle deftly.  The female love interests for Murray and Ramis are weak, but pretty.


“Catch-22” has more of an all-star cast (including Orson Welles). Many of them are considered higher quality than the “Stripes” cast. Arkin, the equivalent of Murray, does a bit more scene-chewing, but his character is much more stressed and the movie is more heavy-handed in pushing its message. The supporting cast is excellent and plays the satire straight.


“Stripes” falls into the classic service comedy genre pioneered by Chaplin, Laurel and Hardy, and Abbott and Costello. Murray is hilarious as the anti-hero and has numerous snarky one-liners. More importantly, it’s a team effort and each character has his moments to make us laugh. The boot camp segment satirizes several war movie clichés effectively - the hair cutting, the obstacle course, the poker game, out on the town. The movie peaks with the iconic graduation scene. “That’s the fact, Jack.” The second half is an action comedy that is less humorous, but gets in the requisite explosions.


“Catch-22” is a dark comedy that is very anti-military. It is much more intellectual and satirical. The movie also does not have a linear structure so it requires more effort by the viewer. Parts of it are even surreal. There are few jokes, the movie is more situational and character driven. It is a message movie, not a make-them-laugh movie. In this respect it is humorous in a head-nodding way. However, it could also be described as depressing in spots. It certainly has more of a point to make than “Stripes”, but for pure humor does not stand up.

Analysis:  If you judge the movies on their success in reaching their demographic, "Stripes" is the clear winner.  It's humor was aimed at 14 year old boys (and those that still are) and it hit the target on the head.  Not just the humor, it throws in a ladies' shower scene and a nude female mud-wrestling scene just to be sure.  Part of me found this shameful, but...  On the other hand, "Catch-22" aims for the high-brow anti-Vietnam War set and is something of a disappointment.  (By the way, it throws in full-frontal so we'll call that a tie.)