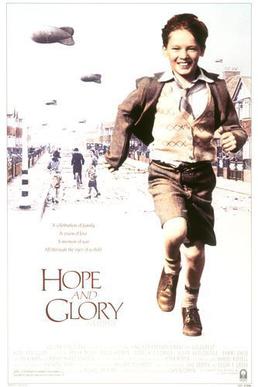 “Hope and Glory” is a war movie set in London during the Blitz of WWII. It was directed by John Boorman and was based on his own experiences as an eight year old boy. It was a British-American endeavor that was released in 1987. It was nominated for Academy Awards for Best Art Direction, Cinematography, Original Screenplay, Director, and Picture. It won the Golden Globe for Best Musical or Comedy.


The movie opens with newsreel footage about the opening of the war (the “footage” is actually from the movie “Battle of Britain”). The movie follows the Rowan family, but concentrates on the little boy named Billy (Sebastian Rice-Edwards). The father Clive (David Hayman) enlists in the Army so his wife Grace (Sarah Miles) has to take care of the three kids during the bombardment. She decides at the last moment not to send the kids off to Australia.

The movie does an excellent job portraying the effects of the Blitz on a typical London neighborhood. An entire street with its houses was constructed for the film (the largest set ever constructed in England up until then). The first bombardment is spent claustrophobically under some stairs. The camera focuses on them and the sound effects are awesome. In the middle, the teenage daughter Dawn (Sammi Davis) runs out and dances on the lawn. She sobers up when the neighbors house goes up in flames.

At school, the head master recites a patriotic prayer. There is an air raid that puts the kids in a bomb shelter. Their excitement is evident. Gas masks and recitation go together. Later, when the school gets hit by a stray bomb, the students yell “Thank you, Adolf!” Very realistic.

Billy is “recruited” into a gang of vandals. They go around the rubble strewn streets making more rubble. His initiation is to say the lewd phrase “Bugger off, you bloody sod” which apparently was very naughty back then. Later, in the movie's most memorable scene, the gang convinces a girl to show them her private parts. The movie is good at showing the effects of the war on the morals of children.

A major subplot is the loose Dawn and her affair with a Canadian soldier. She and her mother butt heads when she finds out. When they return from a beach outing, they find their home aflame. Surprisingly, the fire was not caused by a bomb. It’s just a regular fire. A fireman tells them “it happens in wartime as well.” They go to live with Grace’s crusty grandfather (Ian Bannen) in the country. He’s your typically eccentric British coot. He shoots at rats in his garden from his breakfast table. It’s an amazing contrast to their previous life. The tension of the first half dissipates.

The film is filled with interesting vignettes. Putting up a barrage balloon. A German parachutes into the neighborhood. A rogue barrage balloon. The king gives a speech and they comment on his improved stutter. Playing cricket with grandpa.

“Hope and Glory” is one of the best movies depicting the effects of war on children. Everything Billy experiences feels real. The excitement instead of fear is apparent. The school and gang scenes are authentic. It also does an excellent job showing the variety of effects on different family members. The characters are vivid and human. The actors help make them so. Special kudos to Miles, Bannen, and Davis. The child actors are strong.

This is a wonderful little movie. The best word to describe the humor is it is “droll”. Not laugh out loud. More smile out loud. There is no better movie about the Blitz from a family point of view. There are few movies about the home front in any war better than “Hope and Glory”.

Will it crack the 100 Best? Probably