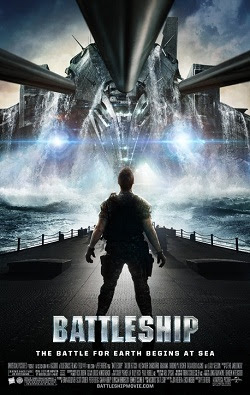 The latest opportunity for war movie buffs to see a movie in their favorite genre is “Battleship”. The movie answers that age old question: “why can’t they make a movie out of the board game Battleship?” (especially since “Clue” and “Jumanji” were so successful). Apparently Hollywood heard the tumult of pleading or the movie industry has run out of ideas.


The movie begins with the discovery of an Earth-like planet and the undebated decision to send a message. They have to be peaceful, right? No one wants to listen to nerd, comic relief scientist Cal Zapata (Hamish Linklater) who likens the aliens to Columbus with Earthlings playing the Indians. Could he be prophetic? Meanwhile we meet the Hopper brothers. Stone (Alex Skargard) is a naval captain and Alex (Taylor Kitsch) is a screw-up. Could this be a redemption story? Stone joins the Navy and so should you because within months this loser is a lieutenant and in love with Brooklyn Decker (playing Megan Fox’s role). If that isn’t a reason to join the Navy, I don’t know what you high school boys want! Oh, by the way, “Sam” is the daughter of the crusty Admiral Shane (Liam Neeson). He is very disappointed in the underachieving Alex. Unless something earth-shattering occurs, Alex has no chance to earn his respect. Hey losers hoping to marry up, pray for an alien invasion! About to be kicked out of the Navy (for unclear reasons), add another rosary.

America is hosting an international naval exercise off Hawaii when the aliens arrive. What are the odds of the alien communications craft hitting a satellite and crashing into Hong Kong? Pretty high if this is a movie. Marvel at the destruction of Hong Kong.  $200 million buys a lot of explosions. The other four land near the fleet. The ships of Stone, Alex, and Nagata (Alex’s token foe) are sent to investigate. Alex (the weapons officer), Petty Officer radarwoman Raikes (Rihanna because Michelle Rodriguez was unavailable), and Chief Petty Officer Lynch, having never seen a Transformers movie, approach the alien craft in a motor boat. (Why these three would be sent is one of many, many good questions.) The aliens flee back to their planet. Just kidding. Being very poor guests they create a force field that separates the three destroyers from the rest of the fleet. They then lob shells at the destroyers. (The alien technology is either awesome or hohum. Witness their hopping ships. Frogs will be rooting for them.  On the other hand, they have these whirling balls of destruction.)  True Blood fans are going to be pissed. Guess who has now risen from burrito thief to captain? Join the Navy!

They find a dead alien floating so we can see what they look like. Not very impressive. Oops, he’s alive. Suddenly he’s rescued. One stays behind to have a fist fight with the chief and get his head blown off by one of the ship’s guns fired by the feisty black chick. Join the Navy and learn to do everything. Thank goodness the aliens don’t use their superior technology to easily kill the pesky humans. They also inexplicably decide not to sink Alex’s ship. In fact, they cannot locate it in the dark since they did not grow up with “Battleship” board game training. This is for the best, I did not want to witness the reaction of the female audience to the deaths of both Skargard and Kitsch. It’s nice to be a guy because we do not have to worry about our sex objects dying in movies like this.

At this point in a movie like this two things have to happen. The clock has got to start ticking to the “extinction level event” and an alien weakness must be discovered. Check and check. Hint: ETs want to phone home and they are not here to get a tan. Also, shouldn’t there be a tie-in to the board game. If you think there is no way to reference the game play without being ridiculous, you would be right. But you have to give the screenwriters credit for taking on that embarrassing task.

That’s as far as I will go with the plot. You get the drift. Spoiler alert: the movie becomes a comedy! It’s hilarious. Don’t leave before the last fifteen minutes.  The movie has a gag reel before the closing credits.

In conclusion, I looked forward to this movie because war movies are so rare these days. Be careful what you wish for. “Battleship” is terrible. I do not want to offend anyone, but you have to lack intelligence to enjoy it. I envy the average moviegoer because they can get away from the problems of today by going to entertainment like this. Let’s face it, “Battleship” is pretty typical of what Hollywood is blessing us with these days. Curse you above average intelligence! Why can’t I be a chump?

In a later post I will specify the numerous clichés, improbabilities and outright absurdities that proliferate this movie. I literally laughed out loud at several insults to my intelligence. Sadly, most of the audience apparently was perfectly content with being insulted. It is incredible to me that any critic could give it a positive review and if I find out any of them gave it a positive review and dissed “Battle: Los Angeles”, I will ring their door bell and punch them in the face.

P.S. Producers of “Battleship”: your movie is clearly pro-military. I have no problem with that, but how clueless do you have to be to use the song “Fortunate Son” over the closing credits? John Fogerty must be laughing his ass off at the irony of that! Did you pay him to use the song? Was he smiling when you handed him the check?

P.S.S. Dear audience, as you are leaving the theater, please listen to the lyrics. The song contradicts tI respect the right of intelligent people to watch a movie just for the fun of it. I myself ocassionally enjoy a movie that has a ridiculous plot and bad acting. It is okay to enjoy this movie, but let noone argue that it is not a piece of crap. Enjoy it as a guilty pleasure and to give your brain a rest, but you have a serious problem if you feel it is quality entertainment. Here is my list of the most ridiculous elements (not including the acting and dialogue).

HOW RIDICULOUS IS IT?

1. The battleship Missouri is now a museum yet has live munitions on board.

2. The day before the invasion there was a ceremony that included veterans of the Big Mo and they hung around on the ship until needed to save the world.

3. The force field conveniently goes away for the final battles.

4. The only main character that dies is Stone Hopper.

5. One 500 pound shell from a WWII-era battleship not only accurately hits the communications site with no guidance system, it sets off multiple collateral explosions.

6. President Obama does not bother to attend any National Security Council meetings with the Earth threatened with destruction.

7. The Admiral describes the U.S.S. Missouri as the “greatest fighting ship in the history of the U.S. Navy”. Sorry, USS Enterprise and USS Constitution.

8. One of the sailors believes these odd craft with their force field are the North Koreans.

9. Aliens with very advanced technology can only hop their ships from one spot on the sea to another and their main defensive weapon is lobbing shells on opponents.

10. Even though the aliens have a problem with bright light, they have no ability to find a destroyer in the dark.

I know "it's just a movie", but why do we have to be insulted?