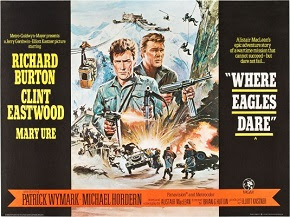 In the late 1960s, Richard Burton was coming off several box office flops and his step-son urged him to dumb it down and make an action picture. Burton took the idea to producer Elliot Kastner who sought out Alistair MacLean (“The Guns of Navarone”). MacLean wrote the book and screenplay (his first) in six weeks and took the title from a line from Shakespeare. Clint Eastwood (fresh off his spaghetti western trilogy) was recruited and it was off to snowy Austria and Bavaria. Just as importantly, famed stuntman Yakima Canutt brought a cadre of great stuntmen to the production. Eastwood would later dub the movie “Where Doubles Dare”. The movie was a huge hit and firmly took a position among the suicide mission subgenre with “Guns of Navarone” and “The Dirty Dozen”.


The movie opens with the iconic theme by Ron Goodwin which is the greatest in war movie history, in my opinion. We also get our first taste of the wonderful snowy mountain scenery. The plot revolves around a secret mission to send a commando team to infiltrate the Schlos Adler (“Castle of Eagles”) which is located high in the Alps. They are to rescue a captured Gen. Carnaby who happens to know the Operation Overlord plans. The team is led by Smith (Burton) and includes American Ranger Schaeffer (Eastwood). When they parachute (“Green on – go!”), they are joined surreptitiously by a female MI6 agent named Mary (Mary Ure). One of the team is found dead on landing. There is a traitor amongst them! Smith has his own agenda as he communicates with his superiors (Adm. Rolland and Col. Turner) back in England. “Broadsword calling Danny Boy”.

Smith and Schaeffer (disguised as German officers) are caught in a night club. The Germans speak English in an early clue that the movie is aiming for entertainment, not authenticity. Smith and Schaeffer cause their captor’s car to crash (an early sign that they are indestructible) and they return to booby trap a shed in the town. They use these really cool dynamite bombs with trip wires. When the Germans search the shed, someone trips a wire and we get numerous explosions. This is a noisy movie when it is not going through long stretches of quiet.

Smith and Schaeffer barge the interrogation party and Burton gets to use some of his Shakespearean training. He tricks the Germans into revealing key intelligence. The Gestapo guy barges in and the talking is over. Let the machine gunning and booby trapping begin!

To get out of the castle requires Schaeffer to slaughter numerous German expendables in a hallway. (Eastwood had his highest body count in this movie and the movie overall has to be in the top 5 all time). This leads to the famous cable car fight scene which has Burton’s double fighting two of the traitors on top of a car. The stunt work is fantastic and includes a leap to another car coming up. The guys (including Jones) and gals head down on another car (as the Germans try to bash in the outer door ala “Guns of Navarone” – did MacLean sue himself?) They leap into a river to avoid the welcoming committee, but they provide a gift basket of an exploding cable car that jumps the body count by about twenty. By the way, the castle has been booby trapped for more cool explosions.

The trek to the air field is via a bus with a snow plow convenient for tripping roadside explosives. They are a bit more hands-on for the blowing up of a bridge as a German vehicle crosses. Why should the guys have all the fun? The girls get their share of the slaughtering. When they reach the air field, it turns out the plow is also convenient for clipping fighters lined up on the runaway. This, of course, leads to more explosions. At this point our quintet is pretty unpopular with the locals, but fortunately there is a transport plane waiting for them. Col. Turner is on board. How nice of him to participate in the rescue of our heroes! I won’t give away the ending, but it is a nice twist.

“Where Eagles Dare” is the best suicide mission/mystery war movie ever made. Of course it does not have a lot of competition, but it is well done. It is meant to be reality-defying for entertainment purposes and it is popcorn entertainment at its finest. The acting is good and even though he is slumming, Burton seems to be having fun and invests in the role. Eastwood is Eastwood, ‘nuff said. The supporting cast is excellent. The girls hold their own and reduce the testosterone level for the female audience. Beautiful women killing Nazis - what’s not to like?

The production is admirable. They spent a lot of money and effort on this film. The location shooting took six months partly because of the weather factor, but the snowscapes are a strength of the movie. The castle is a perfect setting. It is medieval/Nazi evil. The score is great. It is used sparingly, but when it comes on it jazzes up the scene. The stunt work is stellar.

The movie is highly implausible, but not more than others of the subgenre and less than the most recent entrant “Inglorious Basterds”. It does not take liberties with history like a “Braveheart”, for instance. It is what it is and does not claim to be high art. The thing I admire about it the most is that there are two scenes that have really nice plot twists. You rarely get that in war movies. It is one of those movies where you wish you were seeing it for the first time and encourage people who have not seen it to watch it with a wink. Normally, I do not like to watch twist movies again because you now know what will happen, but in this case the ridiculously over the top action scenes keep me coming back. In my opinion it is better than its rivals. I would rank them in this order:

6.  The Eagle Has Landed