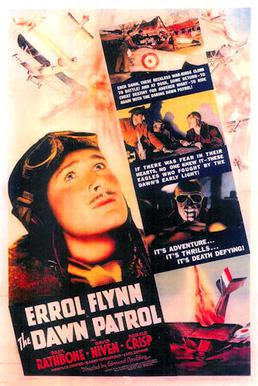 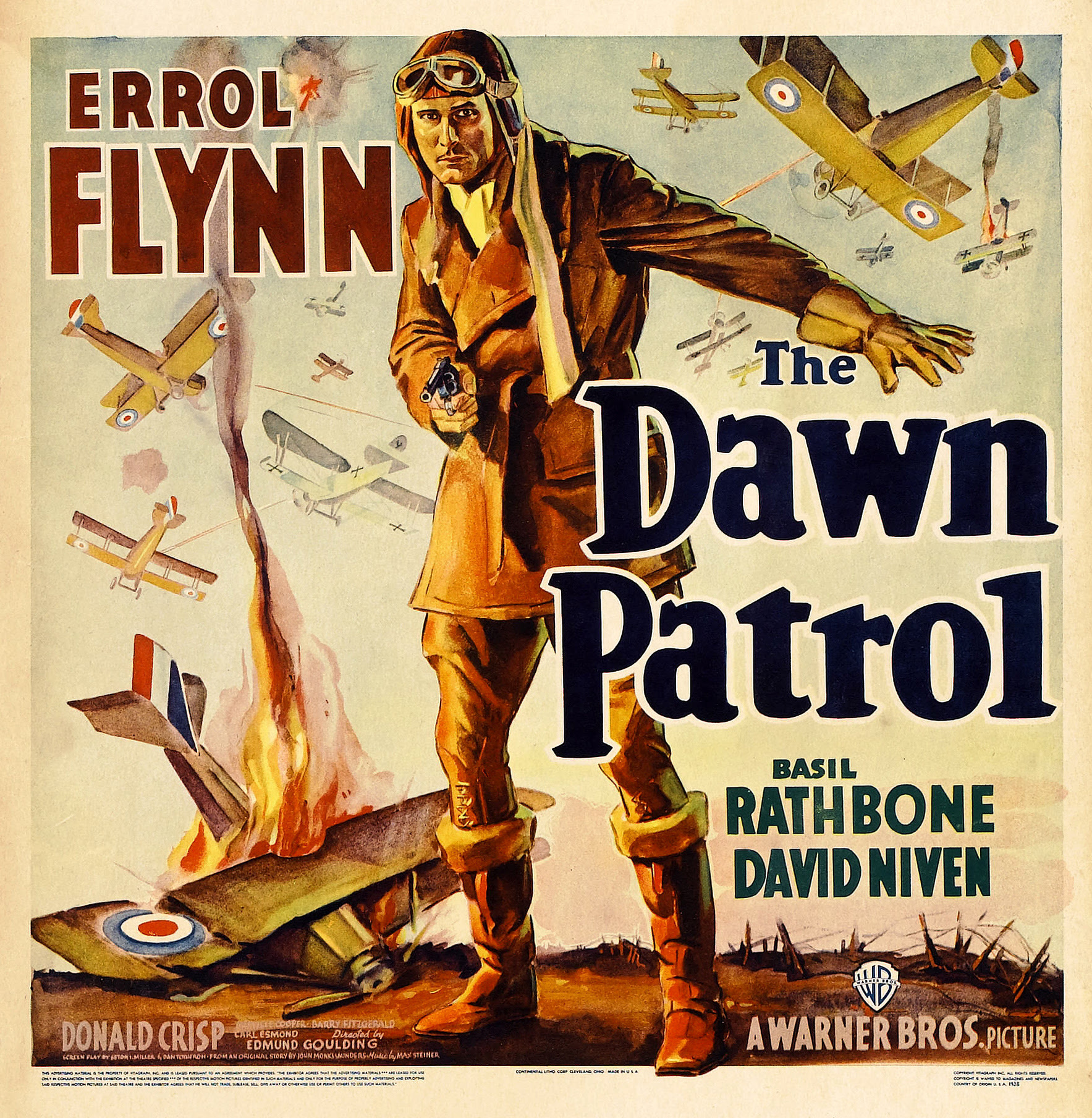 BACK-STORY:  “The Dawn Patrol” (1938) was a remake of a 1930 film and even uses a lot of the aerial footage from that film.  The plot is from the short story “The Flight Commander” by John Monk Saunders (who also wrote the “Wings” story).  It was the third teaming of Basil Rathbone and Errol Flynn and once again they play antagonists.  Rathbone was a decorated WWI veteran and wore his decorations in the movie.  The film used 17 vintage aircraft (and 15 crashed during production).
OPENING:  The 59th Royal Flying Corps squadron is stationed at a base in France in 1915.  Col. Brand (Rathbone) awaits the return of a flight when he receives a call from headquarters.  Based on his end of the conversation, Brand is irritable, disillusioned, and insubordinate.  You know – a WWI squadron commander.  He counts the returning planes – 5 of 7.  Brand:  “You know what this place is?  It’s a slaughterhouse, and I’m the butcher.”
SUMMARY:  Two survivors are BFFs Courtney (Flynn) and Scott (David Niven).  Who did we lose?  Oh well, let’s get drunk!  And let’s sing our favorite song:  “Hurrah for the Next Man Who Dies”.  However, when Courtney meets with Brand he is livid about Brand sending them on suicide missions.  The dude is just doing his job (like Savage in "Twelve O'Clock High").  They both draw their swords.  Oops, wrong movie.
Replacements arrive.  Young, enthusiastic, naïve, cannon fodder.  They can’t wait to shoot down some Heinies.  Who needs training?  On the next mission, Scott is shot down.  This time Courtney is not in a partying mood.  His mood changes when the German who shot down his BFF arrives as a captive and being a fellow knight of the air and just doing his job, let’s party!  Hollister (who also had lost his best friend) accuses Courtney of crassness and tries to throttle the Hun.  Who is behaving more realistically?  Scott returns in the middle of the party.  Turn it up!
A German plane drops a pair of boots with a taunting message.  Brand forbids Courtney and Scott to retaliate.  Would you believe they disobey him?  The raid on Von Richter’s field catches the Germans with their pants down.  You’d be amazed how many explosions a couple of WWI fighters can create.  After numerous strafing passes without a scratch, Courtney gets hit by ground fire and Scott lands and picks him up.  Then Scott gets hit and they crash in “no man’s land”.  You know, a typical day.
When they return to base, Brand is chewing them out when a phone call arrives from a general in a chateau promoting him due to the success of the raid.  As if that is not satisfying enough, he can choose his replacement.  He gleefully bumps Courtney up to most-hated-man-in-the-squadron.  See how you like putting young men in “canvas coffins”.
Courtney quickly learns that command is a bitch.  He’s not the cool guy anymore.  When Scotty’s kid brother Donnie arrives as a typical gung-ho replacement, Courtney has to treat him like dead meat like everyone else.  Scott breaks their friendship over Courtney not showing favoritism toward his brother.  Courtney is now Brand, how ironic.
On the next mission, Scott watches Von Richter shoot down Donnie.  Scott, who apparently is clueless about the dynamics of the war, calls Courtney a “butcher” and claims he killed Donnie.  Courtney points out accurately that it is a “rotten war”.
Brand arrives with a big ole smile on his face.  The brass wants a suicide attack by one plane (?) on an ammo dump.  Scott volunteers, naturally.  Suddenly, Scott and Courtney are reconciled.  While Scotty catches some winks, guess who abandons his command responsibilities to steal the mission?
CLOSING:  Unfortunately for Courtney’s life expectancy, the entire German army is ready for him.  He drops a bomb on a train and blows it up.  That’s accurate for a fighter pilot!  Would you believe there are numerous explosions when he bombs the ammo depot?  I’m pretty sure he drops more bombs than his plane carries.  It’s dogfight time as Von Richter (boo! hiss!) arrives.  Courtney shoots down the not-the-Red-Baron, but is wounded and crashes.  Ladies, man your hankies.  Guess who is the new squadron commander?  New replacements arrive.
RATINGS:
Acting -  9
Action – 7
Accuracy – 6
Realism -  7
Plot -  8
Overall -  8


WOULD CHICKS DIG IT?  Probably.  The cast is certainly appealing.  It is definitely not graphically violent.  However, there is not a single female character in the movie.
HISTORICAL ACCURACY:  The movie does not claim to be based on true events.  There was a 59th Squadron, but it was a reconnaissance unit and it did not arrive at the front until 1917.  The incident where Scott and Courtney  attack the aerodrome is similar to the great Billy Bishop’s Victoria Cross exploit.  The nature of air combat is realistically portrayed.  Life expectancy was definitely low, especially for the new guys.  Based on my knowledge of WWI in the air, it seems that the scenarios and vibe would be better placed later than 1915.  The main problem with accuracy in the movie is the fact that the producers believe a fighter plane is the same thing as a bomber.  This seems to be a common misconception in WWI movies.  And some WWII movies, witness fighter jocks Rafe and Danny participating in the Doolittle Raid.
CRITIQUE:  If this movie was made today, it would be considered a comedy because of the clichés.  However, in 1938, it was breaking new ground.  It’s main themes are going to be reused in numerous other war movies.  One theme was the hard-drinking fatalism of the fighter pilots as seen in “The Longest Day”, “Fly Boys”, "Aces High", "The Blue Max", etc.  As the son of a fighter pilot (my father flew F-105s in Vietnam), I can attest to that mentality.  Another theme is the dead meat nature of replacements.  This cliché branched off into other services like the infantry in “Platoon”.  A third theme is the pressures of command and the stress of sending young men to their deaths.  See "Twelve O'Clock High" as the best example.  A similar theme is the insensitivity of higher command as seen in “Paths of Glory”.  The movie is not heavy-handed in pushing these themes.
The movie holds up well.  Mush better than many old WWI movies.  The acting is outstanding.  Flynn and Rathbone were at the peak of their careers and Niven considered it the movie that gave his career a boost. With that said, his Scott’s reaction to his brother’s death did not ring true.  He would have known to blame the brass, not Courtney.  I especially liked Rathbone’s portrayal of the tormented Brand.  His change of personality when he no longer had to make life or death decisions was fun to watch.
The cinematography is eye-opening.  The aerial scenes are well done although you have to give a lot of credit to the earlier film.  The vintage aircraft are obviously superior to modern CGI.  The air combat looks more realistic than in “Flyboys”, for instance.  The close-ups of the pilots are too clearly filmed in front of a screen, but this was common back then.  The sound is excellent.  The special effects (e.g., the explosions) are good for that era.  However, I have to say that the small bombs used in the film result in exaggerated explosions.
The script and dialogue are good, but the movie is a bit predictable.  Courtney’s promotion and Donnie’s death are hardly surprises.  There are several scenes that strain credulity (e.g., the crash in “no man’s land”), but nothing that is LOL.  The movie is commendably anti-war and not propagandistic.  You have to admire the cynicism of a movie made with the U.S. moving closer to involvement in WWII.    At one point, Courtney describes the war as “a great big noisy rather stupid game that doesn’t make any sense at all.  None of us know what its all about and why.  Here we are going about it with hammer and tongs and I bet those fellows over there feel the same way.”  The treatment of the captured German pilot indicates this.  One wonders if the movie was made two years later, whether the movie could have had that camaraderie.
CONCLUSION:  “The Dawn Patrol” deserves its place on the list because not only is it an important film which created several air combat conventions, but because it is simply a good movie.  Some of the other movies that made Military History’s 100 Greatest list are important films (e.g., “The General”), but they are just not good movies.  “The Dawn Patrol” manages to influence future movies and fit comfortably into that future.