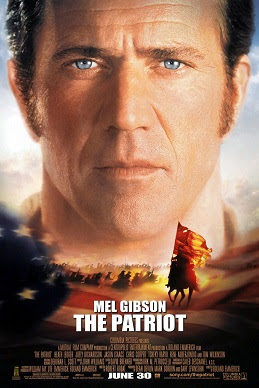 An ongoing debate on Armchair General’s Movie Forums got me interested in rewatching “The Patriot”. The debate is centering on two different views. One school can be described as the “Dude, it’s just entertainment. Chill out” school. The opposition takes the position that “this is a raping of history that will undo all the hard work of history teachers”. “The Patriot” is one of the most polarizing recent historically based movies. I tend to come down on the side of the defenders of historical integrity, but I understand why movies take liberties with the truth.


“The Patriot” was released in 2000 and is a Mel Gibson vehicle (check out the poster). It was directed by Roland Emmerich (“Independence Day”). It is the story of a French and Indian war veteran named Benjamin Martin (Gibson). Martin owns a plantation in South Carolina where he lives with his beautiful family of very photogenic kids (based on Gibson’s kids). The year is 1776 and South Carolinians are debating independence. Martin is against war and favors negotiating. His main reason for his pacifism is concern for his family, but he also did some bad things in the French and Indian War that he does not want to repeat. He cannot prevent his oldest son Gabriel (Heath Ledger) from enlisting.


Their idyllic plantation life (with their free blacks working alongside them) comes to a halt when the wounded Gabriel returns home and a battle breaks out in their front yard. The next day the British arrive to take possession of the farm. The Brits are led by a dragoon colonel named Tavington (Jason Isaacs) who proceeds to: 1. arrest Gabriel as a spy to be executed 2. kill the wounded Continentals 3. shoot Martin’s second oldest son in the back. Rules of war? Never heard of them. Anyone of the three would have been enough to wake the dragon. Martin (with the help of his other two sons) wipes out an entire unit to free Gabriel.

Martin realizes you can’t fight the British conventionally so he creates a militia unit based in a swamp. The unit is divided between family men and frontiersmen. There is a token black (fighting for Congress’ promise of freedom) and the requisite racist that he will bond with. They ambush the British in a montage. After one incident of killing prisoners, Martin agrees to stop the practice because they are the good guys.

Meanwhile, back at British headquarters, Lord Cornwallis (Tom Wilkinson) changes his mind about the “ungentlemanly” atrocities of Tavington now that not only has Martin blown up his supply ship to provide fireworks for a Cornwallis party, but has captured the Lord’s dogs! When several of Martin’s men are captured in an ambush and are to be hanged, Martin tricks Cornwallis into exchanging his men for some dummies and he keeps the dogs. This means war! Take the gloves off, Tavington.

Tavington starts targeting the rebel families, including Martin’s. Martin manages to find refuge for them in an escaped slave community. Romance is in the air as Gabriel gets married to Anne (his bundling buddy) and Martin kindles a romance with his deceased wife’s sister. And they live happily ever after, just like the blacks will. Just kidding.

Anne returns home just in time to be locked in the church with the entire town and then roasted by the Nazis. I mean Redcoats. Gabriel leads a vengeance-minded posse after Tavington and is about to kill him when the director yells that Tavington is being saved for Gibson. Having never seen a movie, Gabriel thinks the bad guy is as dead as he should be. Oops. If it was not on before, it is positively, absolutely on now. In the entire history of cinema, Tavington is now the most likely character to suffer a crowd-pleasing violent death.


The final battle is not clearly identified, but we can call it the Battle of Martin versus Tavington (with thousands of their friends). The combat is graphic and bloody. It is tragic so many soldiers have to die so Martin and Tavington can have a duel, but that’s entertainment! The linear tactics of 18th Century warfare are semi-accurately portrayed. Exploding shells. Bouncing cannon balls. Volley. Volley taken. Bayonet charge. Melee. Retreat. Rally. Duel.

Post script: Yorktown. We win! Suck it, Cornwallis. Now everyone lives happily after including the blacks because as Gabriel told the token - “If we win this war, things will change”. It’s a shame Gabriel did not live to see the integrated society the South was to become after the war.

“The Patriot” is a well made movie. The sets and costumes are time-appropriate. The musical score by John Williams is typically epic and brings out the selected emotion for the scene. The acting is strong and sincere. Gibson has a bit of trouble with the range of rage to romance to reflection, but he does not embarrass himself. Isaacs chews the scenery as Tavington, but he is balanced by the pompous Cornwallis. The kids are good except at aging. The action is visceral and pumps up the adrenalin. Hollywood manages to get the requisite explosions, blood sprays, and dismemberments in quite nicely.

As far as historical accuracy, “The Patriot” is no “Braveheart”, but it’s a cousin. Martin’s character was based on the trio of Southern guerrilla leaders (Francis Marion, Thomas Sumter, and Andrew Pickens). The resemblance to the “Swamp Fox” is not far off. Tavington is clearly Banestre Tarleton. Tarleton led a dragoon unit in the South and had a reputation for mistreatment of prisoners, especially after the infamous Waxhaw Massacre. At Waxhaw, surrendering colonials were slaughtered by Tarleton’s men. The term “Tarleton’s quarter” became a rallying cry for the patriots. There is much dispute over how culpable Tarleton was for his troops’ behavior . Certainly it was not premeditated. He did, however, burn colonial homes and execute suspected guerrillas. There is no evidence that he targeted women and children and he never burned a church full of civilians. The fact is that the war in the Southern colonies was rife with atrocities by both the patriots and the loyalists, especially in the backwoods areas.

The final battle is a mash-up of Cowpens and Guilford Court House, which is acceptable. Martin’s strategy of asking the militia to fire two shots before withdrawing is clearly referring to Daniel Morgan’s order at Cowpens. Tarleton was badly defeated in that battle and did fight a duel (on horseback), but with William Washington. Marion, Sumter, and Pickens were not at either of the battles. The Guilford elements include Cornwallis being in command and giving the famous order for his artillery to fire into the melee to break the colonial momentum. This moment is surprisingly glossed over in the movie. The British won the battle of Guilford Court House in spite of being outnumbered. By the way, Tarleton survived the war and lived happily ever after for many years.

Some other historical flubs are less excusable. The treatment of slavery is a joke. Martin’s use of freed slaves as laborers would have been extremely rare in South Carolina. Congress never offered a deal to grant freedom after one year service. The freed slave community the Martin’s take refuge in would have been created to escape from Patriots.

As far as military inaccuracies, the most glaring is the incredible accuracy of the weapons used in the movie. Martin never misses a shot with the notoriously inaccurate muskets of that time. Even his young sons are killing machines. Hell, both Martin and Tavington pull off long range shots at moving targets with pistols! The rapid reloading of these muzzle-loading weapons is also hard to believe, but very common in movies. Because Hollywood requires explosions, we get the anachronized shells exploding during the battles.

My problem with “The Patriot” is not with the historical inaccuracies. I am insulted by the melodramatic chords that are plucked to force emotions on the audience. Nothing in the movie is subtle. You are bludgeoned with clichéd sentiments. This is typical of our modern blockbusters. Movies have been dumbing down for decades now and the cash flow shows that Hollywood’s lack of respect for the intelligence of its clientele is well founded. Every antagonist must be totally evil and every protagonist must be wronged beyond human endurance. If “Jaws” were made today, Chief Brody would be conflicted about having been a shark killer as a young man and the shark must not only kill his family, but rape his grandmother. It would have been impossible to put more venom into Tavington. It was leaking out of his ears . Thankfully, the screenwriter held back on Martin’s motivation to kill Tavington and thus spared most of his family (actually killing the family was probably a proposal that was vetoed by the producers in favor of the rose-colored future implied in the ending).

The scene that represents my thesis is the church burning. Aside from the fact that it has no basis in reality, the horrendous atrocity is included in the film to make a loathsome villain into the most loathsome villain ever. Was this important enough to turn the British into Nazis? Does it make sense to offend an entire market just to throw one more bucket of slime on Tavington? Didn’t the killing of fan favorite Heath Ledger give the audience enough desire for revenge? Dial it back Hollywood, the villains no longer need to twirl their mustaches.

In conclusion, its entertainment if you don’t mind having your intelligence insulted. And by the way, why is it called “The Patriot” when the main character is not? He does not bother to fight for his country until and only because his son is killed.