SHOULD I READ IT? Flame and Citron 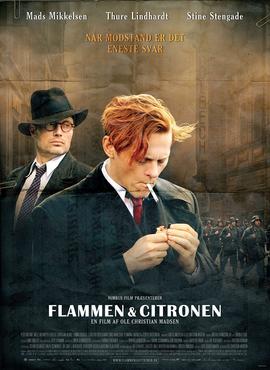 “Flame and Citron” is a Danish film directed by Ole Christian Madsen and released in 2008.  It was the most expensive Danish film to date.  It is a fictional retelling of the Danish Resistance heroes Jorsen Haagen Schmith and Bent Faurshoud-Hviid.  The movie was nominated for numerous awards and is critically acclaimed.
The movie is set in Copenhagen during World War II.  It is “based on actual events”.  When Denmark fell to the Nazis, most Danish wanted to cooperate with the occupation and not makes matters worse.  Some even collaborated and Danish Nazis “came in out of the dark”.   A few wanted to resist, but this resistance mainly took the form of revenge against collaborators.  Jorsen, nicknamed Citron (Mads Mickelson), and Bent, nicknamed Flame (Thure Lindhardt), are assassins for a Resistance group.  Flame, the 23 year old red head, is the shooter.  We first meet him as he splashes a guy’s brains over a portrait of Hitler.  He is cold blooded, but his narration indicates a need to justify his actions.   Citron, the schlubby family man who sweats a lot, is the driver.  He is a terrible husband and father because he is obsessed with the cause.  He starts off as  a reluctant killer.  The first time he volunteers to kill a woman, Bent has to finish her off.  The movie pulls no punches in its violence.  They have a bête noir in the local Gestapo chief Hoffman (Christian Berkel).

Things get complicated when they are ordered by their superiors to start targeting Germans.  Previously all their victims had been “traitors”.  To make matters fuzzier, Flame meets a possible femme fatale named Ketty (Stine Stengade) who may be a double (or triple) agent.  Some of the killings are messy and some create doubts in their minds.  Are some of the victims innocent?  Are they being used?  Who can they trust?  When the killings of Germans results in retaliatory executions of civilians, their handlers order them to stop, but Flame and Citron are determined to get revenge.  The cat and mouse with Hoffman continues.  Members of their cell are being ratted out by an informer.  Is the informer Ketty?  Spoiler alert: the last paragraph picks up from here.

Hoffman and Flame
“Flame and Citron” is a welcome addition to the WWII Resistance subgenre.  It tells the story of a duo who are famous in Denmark, but probably unheard of in most other countries.  I know I had never heard of them even though President Truman posthumously awarded Flammen the U.S. Medal of Freedom in 1951.  I am partial to movies that shed light on people or events that deserve recognition, especially if they don’t mess with the facts much.  It is hard to judge the accuracy of the movie.  My research did not find enough details to weigh in on all the incidents.  Some of the scenes seem far-fetched.  The idea that Flame would be sent to kill his known girlfriend Ketty seems like a ludicrous decision.  Their escape from the Gestapo strains credulity.  Ketty’s relationship with Hoffman is too predictably a love triangle.  Flame did have flaming red hair, but I find it hard to believe that one of the most wanted men in Denmark walked the streets with impunity like in the movie.
There was a Resistance group called Holger Danske.  It was started by veterans of the Winter War in Finland.  They did concentrate on Danish collaborators and killed over 200.  They also participated in around 100 acts of sabotage.  At least 64 members were executed by the Gestapo during the war.
The movie is thought provoking.  Bent is sent to kill a man named Gilbert.  Gilbert opines that there are three reasons to fight in a war:           1.  Career opportunity.  These types do not make good soldiers because they are very interested in survival.  A good soldier should be willing to give up his life.  2.  Patriotism or ideology.  These types tend to burn out, but the fanatics make good soldiers.  3.  Hatred of the enemy.  “Hate seduces you into doing things you never thought yourself capable of.”  (This may foreshadow why when Ketty says that she just wants to survive later in the movie, it’s a sign that she was in it for the money.)
The basic theme is the lack of black and white in war, especially in resistance efforts.  Flame and Citron may have killed innocent people.  Some of what they did may not have been justified.  It is interesting how they react to this.  Bent begins to have doubts and Jorgen gets more hardline.  Or is this due to Flame’s love life progressing and Citron’s marriage collapsing?  Another theme is you can’t trust anyone, except maybe your best friend.
The movie is well made.  Kudos to Madsen.  The cinematography is part of the entertainment.  You are aware of the craftsmanship.  Many shots are off center.  It is not pretentious.  The lighting is also noticeable.  The score is understated and fits well.  The acting is very good.  Both leads have great presense and chemistry.  The movie is a bit wordy, but the dialogue is realistic.  The action is consistent and has some graphic violence.
Grade -  B+
In conclusion, “Flame and Citron” is one of the best of the Resistance subgenre.  Often compared to “Army of Shadows”, it is a better movie.  Of the movies of this type that I have reviewed since launching this blog, here are my rankings:


CLOSING:  Flame and Citron are arrested on the way to another try on Hoffman.  Jorgen tries to jump a fence and is shot, Bent walks away in the confusion.  Jorgen pulls a gun and somehow gets away from the ambulance and next we see him at a safe house.  Cut to Bent who is in a similar situation and both are surrounded by the Germans.  Bent takes cyanide, but Jorgen gets to have a bullet-infested shootout.  He’s Butch Cassidy without the Sundance Kid.  Don’t ask why the Germans unstealthily, prematurely open fire.  He does not win, but takes a lot with him.  They have come full circle from Flame being the enthusiastic assassin and Citron having never killed anyone.   As a postscript and to make it perfectly clear, Hoffman gives Ketty the $20,000 reward.  As to the historical accuracy of the ending, it is substantially correct.  The deaths are authentic.  Madsen’s decision to take a firm stand on the “did she or didn’t she” issue seems to be on firm ground based on research he did.
POSTER:  Doesn't really tell you what the movie is about, but I suppose Danes would already know.  Flame lighting a cigarette is certainly a preview of a common visual.   B
trailer