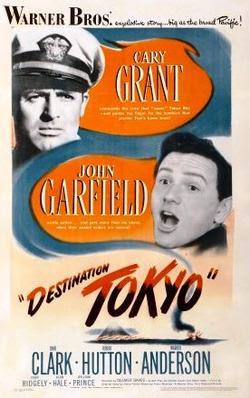 Part of the ever popular submarine subgenre, “Destination Tokyo” firmly takes its place in the middle of the pack.  Released in 1943, it has to be viewed with the ongoing war as context.  Part of the fun in watching it is to look for overt propaganda.
A narrator sets the stage by outlining a secret mission that the U.S.S. Copperfin is going to undertake.  It will have to pick up a commando crew that includes meteorologist Lt. Raymond (John Ridgely) which they will proceed to drop off in Tokyo Bay to send weather reports to the Doolittle Raiders.  Did I mention that this is not based on a true story?
The sappy alarm comes off early as Capt. Cassidy (Cary Grant) writes home to his wife.  This is followed by the first bout of lame sailor banter that is embarrassingly inauthentic.  The pummeling continues with Christmas carols by the crew.  Gag!  It is fun to see the Skipper’s father (Alan Hale, Sr.) as Santa.  One of the crew is a wolf named Wolf (John Garfield) who we see putting the moves on a babe via flashback.  Live vicariously, males in the audience.  In what seems like an unorthodox script move, a discussion (there are a lot of discussions) on God leads to the revelation that the pharmacists mate named Pills (William Prince) is an atheist!
The first action piece is an attack by two Japanese float planes.  What are the chances that the sub shoots down both?  100%  A Japanese parachutes and when Mike (Tom Tully) tries to help him aboard, the Jap stabs him.  Dirty Nip!  This is who we are fighting, audience.  An unexploded bomb nestled in the sub is defused by Cassidy who apparently is a bomb defusing expert.  Its suspenseful, but I was confident the bomb would not blow up the sub at this point in the movie.
Back to the schmaltz, Cassidy plays a recording from his wife.  He gives a speech about how Japanese kids are given a dagger at age 5 and can field strip a machine gun at age 13.  We’re fighting to put roller skates (not ice skates - you could slash someone with those) in their hands at age 5.  The speech seems to have been influenced by lack of oxygen.  More talking, more carbon dioxide.  Crossing the Pacific montage.
They sneak into Tokyo Bay behind a Japanese cruiser and land the commando team.  Wolf goes along in case they meet any ladies.  We get the obligatory Tokyo Rose appearance.  Meanwhile a sailor has appendicitis and dies a horrible and painful death.  Just kidding – Pills uses a book and makeshift instruments to remove it.  (This is based on several actual incidents.)  Good scene.  In a big letdown, they escape the bay with little trouble.  Cassidy watches the Doolittle Raid through his periscope.  Front row seat.  The bombers bomb some models of a city.
Lucky for Jimmy Doolittle and his boys, the Copperfin sinks a carrier which is launching fighters to attack the Raiders. (I am not making this up.)  You don’t suppose there is a depth charging in store for our plucky crew, do you?  Guess who is converted from being an atheist?  In a departure from clichés, there are no rivets popping, leaks springing, going below the maximum depth, releasing a dead body, etc.  The sub sinks a destroyer with a straight on bow shot thus inspiring future submarine movie captains.
Next thing we know the sub is back in San Francisco.  Why not finish up with more talking as all the main characters discuss their future plans?  Cassidy’s wife is waiting for him, naturally.  Smoochy, smoochy.
“Destination Tokyo” is an average sub movie.  The acting is good although Grant underplays a bit.  The dialogue is sappy, but not cringe-worthy.  There is a lot of it, however.  The plot is ridiculous and yet the movie was nominated for Best Original Screenplay!  Anyone who disagreed with that was a Jap-lover.  The movie drags and saves most of the action for the last half hour.  We get little of the dysfunctionality among the crew so common in sub movies, but the movie could have used some.  The Jap-baiting is not overboard.  The special effects are not bad for 1943.  The shipboard routines were so authentic that the Navy used the movie as a training film.  Kudos for that.
Classic or Antique?  Antique
Grade =  C