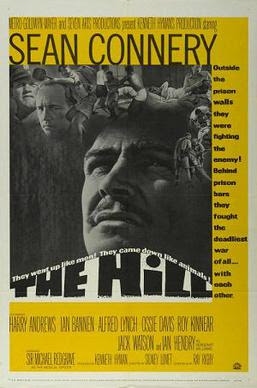 “The Hill” is a British prisoner of war movie released in 1965.  It was directed by Sidney Lumet and stars Sean Connery.  The screenplay is based on a play by R.S. Allen.   It is set in the Libyan desert in a British “glasshouse” which is what British Detention Barracks were called.  British soldiers are sent to these military prisons for various infractions like insubordination and desertion.  They had a reputation for cruelty.  This camp is run by the martinet Sgt. Major Wilson (Harry Andrews) who believes you have to break the inmates before you can remold them into good soldiers.


The “Hill” is the artificial sand hill in the middle of the camp that is used for punishment.  The movie opens with a soldier carrying a sand bag to the top of the hill, emptying it, fainting in the hot sun, and being carried away as the other inmates drill in the background.  The camera pans away to reveal other soldiers going up the hill.  It’s an intriguing opening.


A set of five new inmates arrives.  One is a former Sgt. Major Roberts (Connery) who has been convicted of assaulting a superior officer when he was given a suicidal order.  He is one sassy SOB and immediately tangles with the sadistic Staff Sgt. Williams (Ian Hendry).  Williams labels Roberts a coward and targets him for special treatment.  To make matters worse, one of his cellmates (McGrath – Jack Watson) takes a hating towards him.


Williams also picks on Stevens (Alfred Lynch) because he thinks he’s gay.  He makes him climb the hill with a gas mask on.  In a movie where even the guards are sweating their asses off, this is particularly evil.  Later, Stevens dies in his cell.  The Medical Officer (Michael Redgrave) is a wimp who refuses to stand up to Wilson when he demands he cover up the death.  Wilson realizes Williams is a bad egg, but believes loyalty to his officers is crucial to maintaining order.  On the other hand, Sgt.Harris (Ian Bannen) is humane and the conscience of the camp.


A mutiny by the men has them chanting “Stevens”.  Wilson stands up to them and by threatening them with capital punishment for mutiny, gets them to back down.  When Roberts steps forward and demands to see the commandant, Williams and two other guards beat him up.


Eventually, Williams gets what he deserves, but the movie ends with the distinct impression that the feel-good justice will be replaced with severe consequences.


This is a powerful film.  It is not your standard POW film because the inmates are not technically prisoners of war.  They are more like convicts.  Also, there is no escape planned or executed.  It is basically a character study and an interesting one.  The themes are abuse of authority and the battle of wills.  There is a “power corrupts” vibe to it.  Never give power to flawed personalities like Williams.  You also get the frustration of trying to buck the system as represented by Harris.


The movie is strong technically.  It won the BAFTA for cinematography.  Oswald Morris shot the film in monochromatic hues.  There are numerous close-ups and odd angles.  Morris uses quick cuts and some hand-held.  The screenplay has some good dialogue (although I couldn’t always understand those limey accents).  Connery gets some witty lines.  The characters are varied and fleshed out.  The acting is top notch.  This was Connery’s first big non-Bond role and he proves he will not be type-cast.  The rest of the cast is very strong.  Ossie Davis scores as an unstable prisoner who eventually appears before the CO in just his underwear.  Kudos to Lumet for making a movie with no likeable characters.


Although not based on a true story and not your standard POW film, “The Hill” deserves a place among the best of this subgenre.  It accurately portrays the brutality of the “glasshouse” system and gives the audience a look back to when physical abuse of soldiers to make men out of them was standard procedure.
Grade =  B+
Posted by War Movie Buff at 9:58 PM