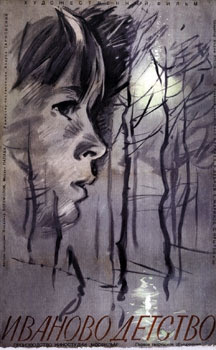 “Ivan’s Childhood” was the first feature film of acclaimed Soviet director Andrei Tarkovsky who also helped write the screenplay based on a short story.  It was released in 1962 and was publically and critically acclaimed.  It won the Golden Lion award at the Venice Film Festival.  The movie is similar to “The Cranes Are Flying” and “Ballad of a Soldier” in depicting the horrors of war on the innocent.  It is the tale of twelve year old Ivan Bondarev (Nikolai Burlyayev) who was orphaned during the Great Patriotic War when his mother and sister were killed by the Germans.  It is set on the Eastern Front circa 1943.
Ivan arrives at a Red Army camp after crossing a bleak landscape and swimming a river.  He insists on making contact with headquarters which seems laughable to Lt. Galtsev (Evgeny Zharikov) until it turns out that Ivan is a valuable spy and scout.  Galtsev and Capt. Kholin (Valentin Zubkov) “adopt” the serious little warrior and he stays with them in their room.
There is a subplot involving a medical assistant named Masha (Valentina Malyavina) and her messing with the dynamics of Galtsev and Kholin.  Kholin tries to put the moves on her and Galtsev is interested, but shy.  She manages to keep her hair nice which was a feat on the Eastern Front. Later, there is a record player in the room that plays a song about her.  WTF – yeah, it’s that kind of movie.
Galtsev and Kholin want to save Ivan by sending him off to military school.  Ivan threatens to run away and join a partisan unit if they try.  He wants revenge for his family.  They back down and the trio cross the river in a boat to drop off Ivan for his next reconnoiter.  Galtsev and Kholin return with two Soviet corpses.  Masha arrives at the bunker to say goodbye.


The movie jumps to Berlin with the Soviets celebrating.  There is actual footage of the Chancellery building and the corpses of the Goebbels family.  The audience is invited to ponder the contrast between the Goebbels kids and Ivan.  Galtsev roots around in documents and finds evidence about the fate of Ivan.  The movie flashes back to when Ivan was young and innocent.
This is an artsy movie.  Not everyone will like it.  I was kind of torn by it.  The plot is not good and the nonlinear structure could be confusing.  There are lots of flashbacks and some of them are weird.  In fact, from the very beginning of the film you will know you are in for something unusual.  There is a dream sequence that is surreal.  Ivan is riding in the back of a truck with a girl in the rain.  The truck is full of apples.  Some of the apples spill out onto a beach.  Horses eat them.  Get it?  I didn’t.  Much of the film is cryptic or makes no sense.  The eerie music fits the mood of the film.


The film is worth watching because of the cinematography by Vadim Yusov.  He uses his whole bag of tricks and the movie is a visual treat.  There are POV shots, hand-held, off center, odd angle.  Some scenes have action in front right and back left.  One really cool scene has characters each at a different level – foreground, middle, and background.  There are lots of distant shots.  The plot may be bizarre and unsatisfactory, but I was intrigued by the visuals.


The acting is adequate.  Burlyayev does a good job in portraying Ivan as a boy who has been damaged by his experiences.  He has been twisted into a fanatical and cocky warrior.  War and the killing of your family can have that effect.  You don’t see any of Ivan’s revenge, however.  The movie has little action and none of it is graphic.  This is an intellectual movie aimed at intellectuals (and considering some of its biggest fans included Ingmar Bergman and Jean-Paul Sartre, mission accomplished!).


Should you read it?  I think this review should make it clear whether it is a movie you might enjoy.  I’m glad I experienced it, but I have to say it is not in a league with “The Cranes Are Flying” or “Ballad of a Soldier”.