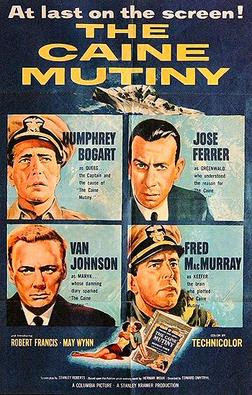 “The Caine Mutiny” is based on Herman Wouk’s bestseller.  It was directed by Edward Dmitryk (“The Young Lions”) who had been one of the “Hollywood Ten” and had spent time in prison for refusing to answer questions posed by the House Un-American Activities Committee.  The film was almost not made due to concerns from the Navy.  However, the Navy eventually extended its cooperation after the filmmakers started the movie with the caveat “There has never been a mutiny in the USN”.  This is the only instance in war movie history where the makers insist it is not based on a true story.  The movie was a big hit with audiences and critics.  It received Oscar nominations for Best Picture,  Actor (Bogart lost to Brando in “On the Waterfront”),  Supporting  Actor (Tom Tully), Screenplay, Sound Recording, Editing, and Score (Max Steiner).
The USS Caine is a destroyer minesweeper.  It is part of the Pacific Fleet during WWII.  Ensign Keith (Robert Francis) arrives on the undisciplined, but efficient rust bucket and is appalled by the lax attitude of Lt. Commander DeVriess (Tom Tully) who comments that the Caine is a “ship designed by geniuses to be run by idiots.”  Keith screws up in his first drill and is reprimanded by DeVriess prompting Keith to respond that the ship is slackly run.  Be careful what you wish for, kid.
DeVriess is replaced by Lt. Cmdr. Queeg (Humphrey Bogart).  Queeg is a lifer who is a veteran of the Battle of the Atlantic.  He is a “by the book” type who virtually holds his nose upon inspection of his new command.  In the first meeting with the officers,  he pulls out his marbles – oh, oh!  Keith is the only officer who is excited by the change in command.  Lt. Keefer (Fred MacMurray) immediately begins plotting and makes a reference to Capt. Bligh.  Executive Officer Maryk (Van Johnson) is concerned, but reserves judgment.


The plot concentrates on three incidents that lay the groundwork for the climactic act of mutiny.  The first is the cutting of a target towing cable that shows Queeg to be an incompetent martinet.  The second is withdrawal under fire from escorting landing craft that suggests that Queeg is a coward or at least a PTSD casualty.  And then, of course, there is the strawberry incident.  Queeg insists on a full-blown investigation of the theft of some strawberries.  This insane obsession has Keefer pushing for consideration of Article 184 – removal of a captain due to mental illness.

What muddies the waters is that after the second incident, Queeg vaguely admits maudlinly that he may need some help.  None of the officers respond.  Instead, Maryk begins to keep a journal to chronicle the montage of incidents leading up to the strawberries.  A trip by Keith, Maryk, and Keefer with the journal to see Adm. Halsey is aborted when Keefer gets cold feet.


The last straw comes during a typhoon that threatens the whole fleet, but in particular the smaller ships like the Caine.  Ever the order-follower, Queeg refuses to change course even though survival depends on it.  When he compounds this stubbornness with a catatonic state, Maryk relieves him of command and saves the ship.  This seems to be a very reasonable act, but some would call it mutiny.  Like the Navy.  Sure enough, Keith and Maryk are brought before a court-martial.  They are represented by a very irascible lawyer named Greenwald (Jose Ferrer).  He is pessimistic and not at all sympathetic.  The trial will hinge upon the testimony of Queeg.  Will he lose his marbles?
“The Caine Mutiny” is a highly regarded drama mainly because of the stellar acting.  Bogart gives his last great performance and several of his scenes are the work of a master.  The rest of the cast is strong.  I do not comprehend how Tully got an Oscar nod for a minor role and MacMurray was overlooked for playing against type and creating a loathsome character.  Ferrer is good as the lawyer, but the character is unrealistically belligerent toward his clients.  (See below for the trial.)


The movie is technically sound.  The special effects in the typhoon are amazing.  However, the soundtrack is Max Steiner minor.  The typical old school mood music.  Sappy romance music for the sappy romance scene.  The cinematography is nothing special.


The novel and movie grew from a seed of truth.  Wouk served on similar ships in the Pacific in WWII.  The inspiration for the story came from the USS Hull which sank in Typhoon Cobra.  The typhoon was a disaster that caused considerable damage and loss of life for Adm. Halsey’s fleet off the Philippines in December, 1944.  The Hull’s captain, Joseph Marks, was obviously the model for Queeg.  Marks was a veteran of the Atlantic convoys.  He was an incompetent tyrant who forbid conversations between officers and enlisted.  He deprived the crew of shore leave for minor infractions.  During the storm, the officers discussed removing him, but decided against it.  However, a court of inquiry after the ship sank found him too inexperienced for the safety of the ship.


I have not read the book, but the movie follows it pretty closely.  The characters are essentially the same.  However, the book gives much more coverage to Keith before and after the incidents portrayed in the movie.  The novel is essentially a redemption tale of Keith who goes from an incompetent, clueless, callow, rich jerk to a mature, competent ship captain who learns from his mistakes.  The Keith character in the movie is not well developed.  The movie adds a schmaltzy romantic interlude between Keith and his girlfriend.  Considering the studio insisted the movie not go over two hours, these were wasted minutes.  This is a 1950s war movie so you have to shoe-horn in a romance.  Yucch!


The movie is a must-see, but I found it to be overrated mainly because I could not buy the plot twist that the mutiny was unjustified.  The film makes too strong of a case that Maryk had to save the ship.  Also, the case against the mental stability of Queeg piles up to Olympian heights.  Sure, the officers should have been more sympathetic and taken up his vague plea for help, but the movie makes it apparent that Queeg was unlikely to change.  The movie (and novel) does a good job taking down the slippery Keefer, but it does not have to take down Maryk with him and there is little reason to rehabilitate Queeg in the post script.

Will it crack my 100 Best War Movies?  Unlikely since I do not consider it to be clearly a war movie.


grade  =  B
SPOILER ALERT:  The Trial
Greenwald is pessimistic and not at all sympathetic.  Apparently every potential Navy defense attorney is extremely anti-mutiny no matter the circumstances.  However, although you might not want a pit bull in your cage, it is nice to sick him on your opponents.  In the trial, Keefer weasels out of complicity.  (I doubt he recounted this to "His Three Sons".)  Queeg is called to the witness stand and at first lies his ass off and tries to play it cool (which is unnatural for him).  Under sharp questioning by Greenwald he pulls out his marbles and becomes unglued in an iconic scene.  Acquittal accomplished.  The movie appends a scene that causes the audience to question the seemingly logical actions of the officers and the court.  Greenwald confronts the mutineers and makes it clear they were wrong and he loathes them.  Apparently he would have preferred they and their ship were resting at the bottom of the ocean.  I bet he felt bad when he saw the movie.
Posted by War Movie Buff at 10:30 PM