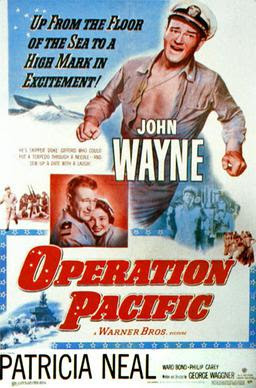 “Operation Pacific” is a John Wayne WWII submarine movie released in 1951.  It was directed by George Waggner (“The Fighting Kentuckian”).  The technical adviser was Admiral Charles Lockwood, COMSUBPAC.  The movie is dedicated to the “Silent Service”.  An opening narration tells the viewers that after Pearl Harbor the subs had to carry the war effort in the Pacific.  52 subs and 3,500 submariners were lost during the war.


The opening scene places us squarely in Old School territory.  Lt. Commander Duke (how original!) Gifford (Wayne) paddles a boat in front of a screen while someone off screen throws cups of water on him.  He rescues a group of nuns and orphans.  This was loosely based on the rescue of some refugees by the USS Crevalle after the fall of the Philippines. The kids proceed to run all over the sub, thus emphasizing the common theme of the sub as a family.   The problem is not the damned kids, it’s the damned torpedoes.  The Thunderfish fails to sink a fat juicy aircraft carrier because the torpedoes fail to explode.  We know this because we see a model of a sub in a swimming pool fire torpedoes that literally bump into the side of an aircraft carrier model.  1950s special effects – got to love them!  Speaking of Old School, one of the seamen actually says “I’m a monkey’s uncle”.


When the Thunderfish returns to Pearl, we enter the romance phase of the movie.  Groan!  It seems Gifford is divorced from a nurse called Mary Stuart (Patricia O’Neal).  Would you believe they divorced because he chose the service over her and their child?  (Sounds like Sgt. Stryker in "Sands of Iwo Jima".)  He chose his sub family over his real family.  However, now that he is back on shore, he wants Mary back.  And it’s not just because he misses the nookie.  Love triangle alert! Capt. Perry’s (Ward Bond) kid brother wants Mary also.  Fat chance, even Perry wants Gifford to win.  While this chemistry-less romance is exciting the females in the audience, the guys get the naval trope of Gifford bailing out his crew after a drunken brawl.

﻿
Back asea the Thunderfish montages its way through the Japanese fleet.  Some of this is real footage.  The Thunderfish would have won the war itself if it wasn’t for those damned torpedoes.  Queue the big set piece.  They surface when a freighter raises a white flag.  Oops, it’s a disguised warship!  Those dastardly Nips.  Actually, the U.S. used Q-Ships in the Pacific and the Japanese did not.  The Captain is wounded by machine gun fire and orders the sub to dive while he is still on deck.  This is based on the Medal of Honor actions of Howard Gilmore.  Gilmore was wounded in a duel with a gun boat which the USS Growler had rammed.  The sub dove, but when it resurfaced there was no pay back on the Japanese ship.   Duke takes command and resurfaces to ram and sink the Japanese ship.  Revenge accomplished.  Gifford in command accomplished.

﻿
Enough is enough.  Back at Pearl, the crew solves the torpedo problem by dropping them on their noses.  (The idea apparently comes from a fourteen year old in the crew.)  This actually happened, but it was done by experts, not a sub crew.  Surprisingly, although everyone in the movie and in the audience is hoping for a reconciliation, Mary jilts Duke.  Oh, well – it’s back to action.


There’s a wink-wink moment on this tour as the crew gets to watch a submarine movie.  It’s clearly “Destination Tokyo”.  The crew is bored and finds it unrealistic.  Get it?  They undergo a depth charging that is not too clicheish.  They sink a carrier because the torpedoes work now.  Then they end up in the middle of the Battle of Leyte Gulf which they win by themselves.  Not really, they get some help.

﻿
As submarine movies go, “Operation Pacific” is in the middle of the pack.  As Wayne war movies go, it’s below average.  It is definitely Old School, but does avoid most of the tired clichés.  There is no going below the maximum depth scene.  No rivets pop.  There is no jettisoning debris to fake sinking.  The special effects are lame even for 1951.  I’m no fan of CGI but it beats a model in a swimming pool.  Yet, the effects were praised at the time.  Cheesy is still cheesy.  Speaking of – the music by Max Steiner is schmaltzy and I’m not just referring to the romance scenes.  There’s a laughable moment when the Japanese fleet sails into sight with stereotypical Japanese music playing.  The cinematography is fine.


The big flaw is the plot.  The romance goes nowhere.  Throwing in a challenger for Mary’s affections is laughable.  Either Duke is going to have her or no one will.  The movie is also predictable.  Perry is dead meat as there is no chance John Wayne is going to stay subordinate to Ward Bond!  Some of the action is ridiculous.  This is especially true of the scene where they ram the disguised freighter.  Gilmore’s death was powerful enough without Hollywoodizing it.
﻿﻿
Classic or antique?  Definitely antique.  There are many better sub movies.  There are many better John Wayne movies.