On the seventh day of Christmas, my true love gave to me – seven Royal Marines a defending 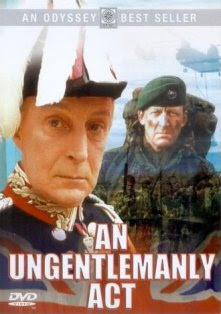 “An Ungentlemanly Act” was filmed to commemorate the 10th Anniversary of the Falklands War.  It covers the start of the conflict.  A background statement informs that the British Royal Marines took over the islands in 1833 and the Argentines had wanted it back ever since then.  The movie was filmed in the Falkland Islands and in a British studio for BBC 1.  It was well-received and won a BAFTA for “Best Single Drama”.


The story opens in April, 1982.  Life on the main island is British idyllic.  We meet the townspeople who are typical blokes and birds.  The center of their society is the pub, of course.  This utopia is going to change.  War talk is in the air.  The new commander of the small Royal Marines detachment Maj. Norman (Bob Peck) gives a rousing speech to his charges.  Contrast this with Governor Hunt’s (Ian Richardson) wife who questions whether the islands are worth it.  Women – they always want to stop the fun.


The action takes a while to arrive (there’s a lot of talking), but when it does it is pretty good for a TV movie.  Argentine commandoes (don’t laugh!) attack the governor’s house.  Cool use of tracers in the night.  It’s a last stand with glass shards.  The Royal Marines hold out until the main landings begin.  The Argentines will have to use that war movie trope of quantity defeats quality.  Plus they bring armored personnel carriers.  Not very sporting.  Governor Hunt negotiates with the Argentine commander and does the reasonable, non-William Travis thing.  A newsreelish post script assures us Anglophiles that all was well in the end.  G.B.! G.B.! G.B.!


“An Ungentlemanly Act” is an informative little film.  It is an accurate depiction of the onset of the war.  I learned a lot from the film.  Believe it or not, I do not teach it in my American History class.  On the other hand, I bet they don’t teach Grenada in British classrooms.  We’ll call it even.  The movie is nobly even-handed.  For instance, the Argentine commander is not a villain.  The movie was shown on Argentine TV.  That tells you a lot about it.  The action is surprisingly intense although not particularly suspenseful as no significant British character is even wounded.  The acting is above average with Richardson providing the gravitas.  The movie begs for a sequel.  I’d watch that.  In fact, are there any good movies on the war itself?