On the sixth day of Christmas, my true love gave to me – six wild geese a slaying 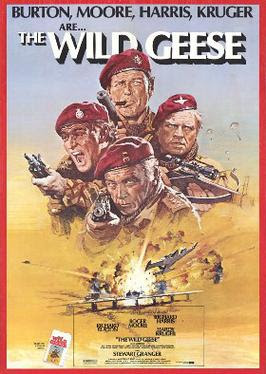 “The Wild Geese” is sometimes referred to as the father of mercenary movies.  How proud it must be to have sired that low quality subgenre!  It was based on an unpublished novel about the rescue of an African leader by an elite force of mercenaries.  The producer dreamed of replicating “The Guns of Navarone” and “Where Eagles Dare”.  Dream big, baby!  The producer rounded up an all-star cast of codgers and took them off to South Africa for filming.   An interesting choice for a movie that has a theme of integration.


“The Wild Geese” opens with a song that rivals “Soldier Blue” in bizarre crappiness.  Not a good start.  A veteran mercenary leader (he looks old enough to have served with Walker in Nicaragua) named Faulkner (Richard Burton - who agreed not to drink during the shoot) is contracted to rescue the African leader Limbani by a copper industrialist who oozes future betrayal.  Next comes the obligatory recruitment sequence.  Faulkner reunites with tactician Janders (Richard Harris - who agreed to not drink during the shoot), pilot Fynn (Roger Moore), drill sergeant Young (Jack Watson), and kaffir-hater Coetzee (Hardy Kruger - who agreed to stop smoking crack, just kidding).  This is followed by the corollary interviewing of the cannon fodder.  They ask each why they want to slaughter Africans, in so many words.  Oh, and are you over 50 years old?  Interestingly, their net snares a gay medic named Witty (Kenneth Griffith).  Training montage, anyone?


In case you’re wondering what do mercenaries do to train – jumping off a tower, tossing logs, and bayonet practice.  It’s off to Africa.  They parachute in and no one gets caught in a tree!  They are startled by an exotic animal – an ostrich!  (As far as I know the only appearance by one in a war movie.)  The rescue of Limbani is suspiciously easy what with Coetzee using his crossbow and the cyanide gas used on the guards.  What a boring anticlimax!  But, wait – there are complications due to a double-cross by a copper magnate.  Imagine that.


The movie transitions to a trek film after one badass Piper Cub strafes and napalms their jaunty victory convoy.  On the way to their alternate egress, Coetzee and Limbani debate colonialism and Coetzee sees the light while carrying his new “don’t call him kaffir” buddy.  Bodies begin to fall and not just expendables.  Even the name actors are vulnerable.  The movie posits the question:  who will survive?  And did their nursing home hold their room?  The first openly gay character in a war movie (as far as I know) gets to kick some ass before being gang-macheted.  (I am quite sure that this is the only time in war movie history that an openly gay character is killed by Africans wielding machetes.)   Get your calculator out to keep track of how many African soldiers are mowed down.  The movie looks like “Zulu” with automatic weapons.  As per war movie rules, the good guys never miss and the bad guys are never just wounded.  The mortality rate is the same as in every other war movie - 100%.  All this leads to a plane piloted by Fynn.  Janders gets his Von Ryan moment.  (I didn’t cry this time.)  Percentage of geezers still alive – 33%.  Percentage of greedy, corrupt industrialists still alive - 0%.


“The Wild Geese” has become something of a cult classic since it bombed in the U.S. upon release.  I guess I don’t belong to that cult.  It is hard to get past the stunt-casting of old has-beens.  Not only are they too old for their roles, but they act tired.  At least “Grudge Match” is meant to be a comedy.  The film looks cheaply made.  The cinematography is that of a made for TV movie.  Check out the cheesy 60’s sets, fashions, and women in the British scenes.  The dialogue is not bad as you would expect and the movie has a large amount of action in the last 30 minutes.  If you can sit through the build-up, the payoff is pretty visceral.  That is if you consider slaughtering Africans to be action.  It does have a number of classic clichés, but that just allows you to feel good about yourself as you predict a lot of what is going to happen.


It’s hard to be too harsh with a movie that portrays mercenaries with hearts.  It is entertaining in a mindless sort of way.  Is it a worthy successor to “The Guns of Navarone” and “Where Eagles Dare”?  Ha ha ha ha ha!