On the eighth day of Christmas, my true love gave to me – eight commandoes a scud-hunting 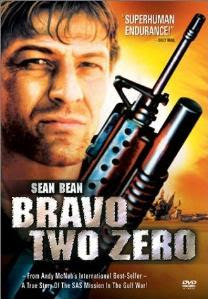 “Bravo Two Zero” is the true story of an ill-fated SAS (British special forces) mission during the Persian Gulf War.  It was a BBC production and was based on the book by one of the members of the squad who wrote under the pseudonym Andy McNab.  The movie fits clearly into the lost patrol subgenre and the “who will survive?” scenario.


The film begins with a cursory introduction to the men as they go off to war.  Andy (Sean Bean) speaks for all of them when he says:  “Every soldier hopes for a major war in his lifetime.”  They are elite soldiers, but have that good ole boys vibe.  This means they party hard, prank each other, and love their mates more than their mates.  Their mission is to be dropped behind Iraqi lines to disrupt the MSR (main supply route) and hunt Scuds.  Piece of cake, right?  Wrong.  First, radio problems create foreboding.  Second, they are discovered by a patriotic shepherd boy and the trek is on.  They are chased by an Iraqi unit that includes armored personnel carriers.  The ensuing firefight proves that eight British commandoes can handle ten times their number in Iraqis (with no losses to the good guys).    Hell, they even counterattack to force the enemy to run!   A decision is made to head for the Syrian border.


During a sand storm, three of the unit get separated from the other five.  McNab’s five hijack a taxi in a ridiculous move that just happens to be based on the truth, so there.  The funniest moment in the film occurs in the cab as Dinger (Steve Nicolson) interprets an Iraqi song playing on the radio:  “My husband has breath like a goat / His penis is small and covered with black heads / Nowadays I sleep with the goats / They have much bigger penises and are twice as intelligent.”  This is typical of the humor found in the film.  I personally found the movie to be effectively humorous and true to the crude humor of soldiers.  When the taxi reaches a checkpoint, we get another fire-fight with no losses.  That is about to change, unfortunately. The five’s next obstacle is an enemy camp adjacent to a bridge.  Complications ensue resulting in us following only Andy.  He is sniffing the border when he is captured.  The last third of the film deals with his interrogation/torture by the Nazis, I mean Iraqis.  The questioning is brutal because he is suspected of being a demon, I mean Israeli.  Will he crack?


I watched this movie thinking I was getting the straight dope (or as close as a war movie can dish it) about a famous military incident.  An incident that the British public is apparently well-appraised of.  Well, it turns out this is just one version of what happened because the McNab book was just the first telling of the story.  Two other members of the squad wrote conflicting accounts and then a reporter weighed in with the “true story”.  Now I’m confused.  It does seem likely that McNab “enhanced” his story almost as though he was writing a screenplay for a war movie “based on a true story”.


As entertainment, the movie is pretty good for a made for TV production.  The acting is good by the ensemble with Sean Bean being his usual dependable self.  The other guys are appealing and the camaraderie is sincere.  They behave and talk like soldiers.  In fact, the soldier talk is so slang intensive that you have to be familiar with British military slang to understand a lot of it.  To make matters worse for your average American viewer, the accents are quite thick.  The action is good with realistic small unit tactics.  They use covering fire and advance in sections, for instance.  The movie is accurate in how many of the eight survived, but quite possibly exaggerated the expendable nature of the enemy soldiers.  This is fine for the action lovers.  There are plenty of Iraqi deaths to not feel guilty about.  Speaking of which, the movie actually has a sympathetic Iraqi character in the form of a general who chases the unit and then shows his respect with some green hard candies (a running gag – in a war movie!)


Christmas present?  It’s jolly good, chap.  I enjoyed it, but then I’m not neutral because it has Sean Bean in it.  I have a bromance for him.  Thus I can understand why his men would follow McNab into an Iraqi desert.
Grade =  B
Posted by War Movie Buff at 6:28 PM