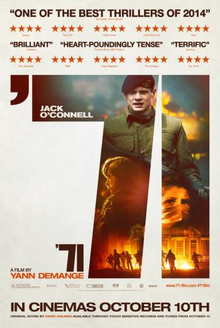 It has been five years since I started this blog and it has been an amazing journey.  It started out as a simple attempt to watch and review the 100 Greatest War Movies (as determined by Military History magazine) and has grown into a big part of my life.  I have been able to wed three fun activities: watching war movies, researching, and writing.  Early on I realized that reviewing the one hundred movies was too limited, so I branched out and created several categories of reviews.  I have even written about war novels and short stories.  I have been pleasantly surprised by how many war movies there are and can see reaching my tenth anniversary without having watched all the ones I want to.  Plus there are always new ones coming out.  This leads me to today’s anniversary post.
One of my favorite things to do is to go to a theater and watch a war movie while playing the role of a movie critic.  Unfortunately, this does not happen very often with war movies.  (But more often than Westerns, at least.)  When a new war film debuts, I always check out the listings.  Sometimes New Iberia is not the best place to be living if you want to see new war movies.  Recently I read some outstanding reviews for a movie entitled “’71”.  I do not think it appeared anywhere in Louisiana and I had given up on seeing it in a theater.  However, on a trip to Austin to visit my sister I found a theater that specializes in independent films.  It was showing it!  (By the way, I had to go to Austin to see “The Hurt Locker” when it came out.)  Unfortunately, I lost my notes which means I did not post it as part of my “Now Showing” series.  I recently watched the DVD and decided it was a good choice for the 5th Anniversary because that post needs to be special.  “’71” is special because it shows that the war movie genre is alive and well.

“’71” is a British war film directed by Yann Demange.  It was his debut and he was awarded the British Independent Film Award for Best Director.  It is a fictional story set in “The Troubles” in Northern Ireland.  The movie did well in Great Britain but barely registered in the U.S. despite amazing reviews (97% on Rotten Tomatoes).
“’71” begins with a training montage.  This includes a type of boxing called “milling” which is trading punches to prove toughness and bravery.  If you know anything about geopolitics from that time, you know the men are being trained to face the Soviets in a conventional war.  They are not being prepared for counterinsurgency in Northern Ireland.  And yet, they are suddenly deployed to Belfast because of the deteriorating situation there.  The city is divided (like the current Baghdad with its Shiite and Sunni enclaves) between Protestant and Catholic forces.  Both have paramilitary units. To make matters more confusing still, the Protestant rebels are divided between the more cautious old school and the more militant new breed.

The main character is a Private Hook (Jack O’Connell).  His only family is a younger brother in a state home.  His unit is tasked with supporting a police unit (the Royal Ulster Constabulary) which is going to arrest a suspected terrorist.  The men are told not to bother with riot gear (shades of “Black Hawk Down”).  They begin to ponder the wisdom of this when they pass a burning double-decker and are hit by piss bombs hurled by Catholic youths.  At the arrest site, women are banging trash can lids to alert the neighborhood.  A mob gathers and they are not welcoming.  Hook gets separated from his unit and is left behind.  A wild chase ensues through the houses and alley ways of the neighborhood.  He manages to escape, but is now the target of a manhunt by the Provisional IRA.  The night becomes something of an odyssey as Hook encounters the dysfunctional players in “The Troubles”.  It is a complicated situation and he is just a grunt thrust into it.  The Provisional IRA is led by Quinn (Killian Scott) and they are at odds with the old breed led by Boyle (David Wilmot).  Muddying the waters is the British Military Reconnaissance Force led by Capt. Browning (Sean Harris).  Browning and his unit are playing both sides of the IRA to keep them at each other’s throats.  Browning wants Hook dead because he witnessed the result of one of their plots.  It is cat vs. cat vs. cat hunting a mouse.

I have seen most of the war movies that have had major releases in theaters since I started this blog and “’71” is one of the best.  (I would put it behind only “Zero Dark Thirty” and “Lone Survivor”.)  It is certainly the best war movie that has come out this year.  It is war movie as thriller.  In fact, Demange was influenced by movies like “Apocalypto”, “Escape from New York”, and “Warriors”.  But the main inspiration must have been Homer’s “Odyssey” with the interiors serving as the islands and the streets representing the seas.  For a debut effort, Demange shows real promise.  The only weakness is some plot holes typical for advancing a thriller plot.  In spite of following the thriller template, the movie is unpredictable.  The cinematography is mesmerizing, especially in the chase scene.  Another stand out scene is the pub explosion which is awesome and memorable.  Tad Radcliffe’s cinematography puts us in the middle of the mob, for instance.  The music matches the mood and does a great job revving up the action.

The acting is top notch, especially by O’Connell.  He is better here than in “Unbroken”.  He plays Hook as a pawn caught in the fog of civil war.  The rest of the cast is up to playing the fascinating characters.  Browning is as slimy a villain as you will see.  The most intriguing is a young boy (Corey McKinley) who is a Loyalist and already caught up in the turmoil despite his age.  He befriends Hook and becomes a casualty of the world the adults have made for his generation.  (Hint:  Put on the English subtitles if you want to understand what he is saying.)  Another youth has been wooed by the Nationalists.  Sean (Barry Keoghan) wants to become a Provisional IRA gunman.  He represents the struggle of conscience versus corruption and the role of peer pressure in war.

Although a fictional tale, the movie is nicely tutorial on “The Troubles”.  This period of heightened tensions and bloodshed between the British and Irish nationalists began in 1969.  It started with the RUC attacking Catholic civilians which caused a reaction that led to the deployment of British troops.  Belfast also was roiled by conflict between the Catholic Nationalists and the Protestant Loyalists.  It got to the point where the city was divided into enclaves.  The Catholic enclaves were designated “no-go zones” by the British Army.  Within those same enclaves there was a dispute between the official IRA which had decided that non-violent civil agitation was the best route to independence and the younger Provisional IRA that wanted to use terrorist tactics.  In 1971, the loyalists of the Ulster Volunteer Force blew up a nationalist pub, probably with the help of the MRF.  The original target was supposed to be a nearby pub linked to the official IRA and then they would blame it on the Provisional IRA to fuel the feud.  Security forces claimed it was an IRA bomb that accidentally exploded in their own pub.  This incident seems to have inspired the plot.  The Hook character was based on two British soldiers who were killed on patrol.

“’71” is a must see for war movie lovers.  It is the kind of movie you gush to your male friends about.  It is kick-ass entertainment, but it is not mindless and it is not aimed at the action film audience.  Its theme that all men are part of a tribe is unusual, but ably advanced.  A more common theme is soldiers are the pawns of power.  Eamon (an ex-medic who tends to Hook) summarizes war this way:  “Posh cunts telling thick cunts to kill poor cunts.”  Put that in your dictionary.