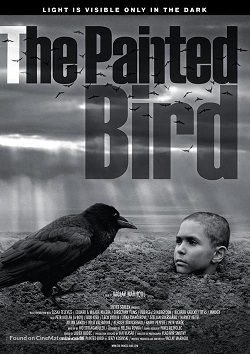 When you’ve seen as many Holocaust movies as I have, you don’t look forward to the next one.  Especially if it has a reputation of being harsher than most in a subgenre noted for being depressing.  “The Painted Bird” is a movie I had vowed to skip because with the current state of the world, who needs more depression?  However, when I started my Buffy Awards recently, I decided to go back and catch some movies that might be award-worthy.  “The Painted Bird” was mentioned as one of the best war movies of 2019.  It was the best movie to come out of Czechoslovakia that year.  Directed by Vaclev Marhoul, it is based on the novel by Jerzy Kosinski.  Kosinski insisted the novel was autobiographical as it portrayed his experiences as a young Jewish boy fending for himself during WWII.  It has since been debunked as it has been proven that Kosinski’s family was safely hidden by Polish people and he was never roaming the countryside on his own.

The movie starts off with a scene that may have caused some audience members at the Venice Film Festival to walk out during a showing.  A boy (Joska -  Petr Kotlar) is chased through the woods by some older boys.  He is knocked down and the pursuers pour gasoline on his pet ferret and set fire to it.  And we’re off!  What follows is a series of vignettes as Joska encounters a variety of humanity.  This being a Holocaust film, you can bet you won’t be seeing the cream of the crop.  Olga (Ala Sakalova) is a faith healer, Miller (Udo Kier) is the cuckold in a love triangle between his wife and the hired hand, Ludmilla (Jitka Cvancarova) is a lusty woman who lives in the woods, Lekh keeps birds and at one point paints one of them (hence the title) and sets it free with nonDisneyesque results.  A priest (Harvey Keitel) makes him an altar boy, but then he is passed on to a pedophile.  Labinia (Julia Vidrinakova) is young woman who toys with him sexually.  A sniper named Mitka (Barry Pepper) becomes his mentor when he joins the Soviet army.  It’s hard to say which of these scenes caused the walk-out.

While not the best war movie in 2019 (that would be “Danger Close”), it is probably the second best.  I did give it the Buffy for Best Adapted Screenplay.  Setting aside the problems with the novel, the movie does not claim to be a true story.  Whether any young boy had Joska’s experiences, you have to admit they are memorable.  The movie reminds of “Come and See” with its young protagonist and its surreal incidents.  It also is similar in that I found neither film to be equal to its reputation for churning stomachs.  Maybe that’s a personality flaw of mine.  I never have had a nightmare after watching a movie. I don’t expect the best of the lower classes in a war situation.  I’m not saying that parts are not hard to watch.  But that would be realistic for a war film.  The movie’s themes of man’s inhumanity towards man and the corruption of youth are familiar ones.  This movie does approach those cliches from a different perspective which shows that even after reviewing over 800 war movies, I can still see something I have never seen before.  Like a boy buried up to his neck with crows pecking at him.  (See the poster.)  Cinematographer Vladimir Smutny creates some stunning visuals like this one.

The structure works partly because of the cast.  The acting is strong and is juiced by the appearance of familiar faces like Keitel and Pepper.  It all depends on the neophyte Kotlar and he is great in his first role.  Again, one thinks of Aleksei Kravchenko of “Come and See”, who was also making his debut.  All of the incidents are interesting.  The movie has no lulls, although each character that Joska encounters is radically different from the last.  Surprisingly, and a bit offensively, some of the more positive characters are the Germans.  It is not surprising that Poland was upset with the depiction of its people.  It is not specified which country Joska is roaming through, but the book made that clear.  Director Marhoul insisted on using Interslavic language so no particular country was tainted.  However, Poland refused to have anything to do with the production.  I get that.

Don’t be like me and avoid this excellent movie.  Be tough.

Email ThisBlogThis!Share to TwitterShare to FacebookShare to Pinterest
Labels: The Painted Bird