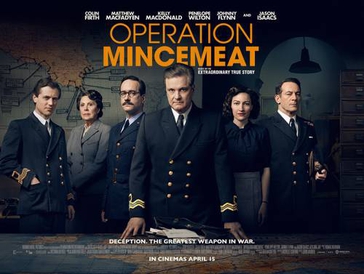 “Operation Mincemeat” is now streaming on Netflix.  It is based on a deception operation in WWII that is considered by some to be the greatest fake-out of the war.  With the Allies planning to invade Sicily in 1943, British intelligence planted a dead body with false information about Greece being the actual invasion site.  The operation was first revealed to the public by a book entitled “The Man Who Never Was” by Ewan Montagu.  Published in 1953, it was a bestseller and was made into an eponymous movie in 1956.  Since it’s been 65 years and anyone less than my age has probably not seen it, it was determined that the time was right for a new movie, in color.  This version was directed by John Madden (“Captain Corelli’s Mandolin”).  The movie is based on historian Ben Macintyre’s “Operation Mincemeat:  The True Story That Changed the Course of WWII” (2010).

A narrator (Johnny Flynn as Ian Fleming) tells us that in war sometimes fiction and reality blur.  A bit of an ominous statement for people like me who fear the movie will be mostly fiction.  “The truth is protected by a bodyguard of lies.”  In this case, the truth is that the Anglo-Americans will be invading Sicily in July, 1943.  Even a buffoon like Mussolini could figure that out.  But perhaps Hitler can get a self-fulfilling prophecy that the invasion will be Greece.  John Godfrey (Jason Isaac), the head of naval intelligence, presents a list of deception possibilities to Churchill called the Trout Memo.  #28 calls for using a dead body with fake papers to fool the Germans.  Churchill gives the green light for its possible implementation to deflect attention away from the Sicily invasion.  The project is turned over to Ewen Montagu (Colin Firth) and Charles Cholmondelay (Matthew Macfadyen).  They have a few months to get everything done and to get it past the reluctant Godfrey.  The movie is organized in hurdles that have to be jumped.

2.  find a lookalike for an ID photo

3.  concoct a biography for the fictional British officer

4.  create “pocket litter” to back up the biography

5.  compose a letter that reveals Greece as the landing site

6.  dump the body off shore to be discovered by the fascist Spaniards

7.  pray the Spanish allow the Germans to read the letter

Besides covering the nuts and bolts of the hurdles, the movie throws in two subplots to keep the movie from being a documentary.  In one, Montagu is sniffing around Jean Leslie (Kelly Macdonald).  The movie has them role-playing William Martin (the corpse’s new identity) and his fictional fiancé Pam.  This flirtation has Cholmondelay jealous as he has eyes on Jean.  The other subplot involves Godfrey investigating Montagu’s brother as a communist spy.

When I heard about this movie, I had a negative attitude towards it.  I am familiar with Operation Mincemeat from having researched it for my review of “The Man Who Never Was”.  That movie was fairly accurate in depicting the operation.  And being accurate, it truthfully was unsuspenseful, until a German agent is thrown in.  Since I found that movie boring, I assumed this new version would avoid that impression by greatly enhancing the story.  I was wrong to be concerned.  “Operation Mincemeat” managed to stick to the facts (for the most part) and avoid being boring.  However, not being boring is not the same as being.suspenseful.  You won’t scoot your booty to the edge of your seat, but the movie flows well from hurdle to hurdle and the two subplots don’t cross the line into laughable.  Although both were obviously thrown in to expand the plot beyond just spycraft.  The only thing jarring is the confusing entry of a spy in the last act.  I can only reckon that some of that development was left on the cutting room floor.

The movie is strengthened greatly by its cast.  If you are a fan of British television series, you’ll recognize several familiar faces, like Macfayden (Ripper Street), Macdonald (Girl/Haji), and Penelope Wilson (Downton Abbey).  The acting is fine across the board.  Firth and Macfayden make believable spy buddies and the love triangle with Macdonald is realistic.  The inclusion of Ian Fleming as a minor character was wise even though his role did not go beyond writing the Trout Memo.  He does the narrating and being a future author of the James Bond novels, the narration has an emotive quality seldom found in narrations.

“Operation Mincemeat” is the kind of war movie where you watch it and continually shake your head and say “yeah, sure!” because you are convinced plot developments are to enhance the entertainment.  When I finished watching it, my gut feeling was that it was accurate, but took too many liberties with the subplots.  I had to up my letter grade when I found out that the romantic subplot and the investigation of the communist brother were acceptably within the ballpark.  I don’t mind a little historical license.  I don’t think Operation Mincemeat could have been covered better cinematicly than what this movie has done.  It is better than watching a documentary and you get all the basic facts about the operation.  It is one of the most accurate war movies I have seen.  (See the historical accuracy section below.)  I recommend the movie for people who like historical accuracy in their spy movies and don’t mind that not a single explosion occurs (except in the brief Sicily landing scene).

HISTORICAL ACCURACY:  The background was based on the current state of the war.  North Africa had been liberated and the next planned invasion was Sicily.  There was legitimate concern about how bloody that invasion could be, especially with if the Germans reinforced the island.  Convincing them that the invasion would occur elsewhere would greatly enhance the chances of success and greatly reduce casualties.  Enter John Godfrey and the Trout Memo.  Most historians believe most of the memo was ideas from Ian Fleming.  (Fleming based M in his Bond novels after Godfrey.)  #28 (out of 54) seemed the best idea for shifting focus away from Sicily.  The Trojan Horse suggestion came from Charles Cholmondelay.  Godfrey was skeptical, but turned the project over to Ewan Montagu and Cholmondelay.  (The movie probably exaggerates Godfrey’s opposition by turning him into the cliché bureaucrat blocking good ideas.)  The duo did find the appropriate corpse via coroner Bentley Purchase.  Glyndwer Michael was a homeless man who committed suicide using rat poison.  He had no family, so the scene with his sister was made up.  Jean Leslie did come on board by providing a swimsuit picture.  They found a lookalike soldier for the identification photo, but it is unlikely that it was of Jean’s boyfriend.  The creation of the pocket litter was as shown.  They did get Gen. Nye to write his own letter that revealed Greece to be the target.  An eyelash was placed in the letter.  Heather Leggett did compose the love letters from Pam.  Race car driver Jock Horsfell did deliver the body, with Montagu and Cholmondelay riding along.  The body was dumped by the submarine Seraph and it was found by Spanish fishermen.  At this point, the movie appears to lay it on thick.  The coroner was not an expert who ends up being fooled as to the cause of death.  In actuality, it was fairly simple and lacking in suspense.  The Spanish allowed German intelligence to have access to the body.  They opened the letter and Admiral Donitz brought the information to Hitler.  (There was an Alexis von Roenne who Hitler valued as a key analyst.  Roenne was an anti-Nazi and ended up being executed for his involvement in the Hitler assassination attempt known as Operation Valkyrie.  I found no evidence that he played a key role in tricking Hitler.)  The movie showing a crucial hand job seems ridiculous, but it was so off kilter that it might be true.  As far as the results, the movie exaggerates the importance of the operation.  Its failure would not have lost the war.  Hitler did not heavily reinforce Sicily, but he was already focusing on Greece, so the letter fed his focus.  It undoubtedly saved lives, but the invasion of Sicily would have been successful no matter what.

As far as the two subplots, they are surprisingly realistic.  Montagu’s family did move to America, but the movie’s suggested reason is suspect.  The movie implies that the marriage was on the rocks, but the main reason was his wife was Jewish and they were escaping a possible German invasion of England.  This seems odd considering the movie has them leaving in early 1943 when there was no possibility of a German invasion.  Ewen and Jean Leslie did have a relationship that included dancing, but apparently did not go beyond that.  Jean was much younger and played the field rather than going steady with an older gentleman. Montagu’s brother Ivor was a communist sympathizer.  (And a famous table tennis player and promoter.)  He did work for the Soviet Union from 1940 -1942, but provided no significant information, and certainly did not know about Operation Mincemeat.  MI5 kept an eye on him and did not need Cholmondelay to aid them.  MI5 deemed Ivor to not be a threat worth arresting.  It is believed that Ewen did not know of his brother’s activities.