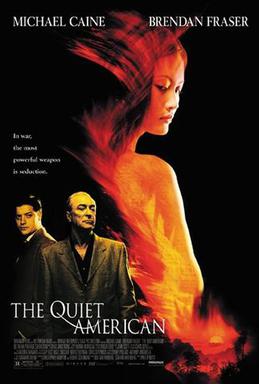 “The Quiet American” was based on the bestseller by Graham Greene.  The novel was published in 1955 and first filmed in 1958, starring Audie Murphy.  This version was directed by Phillip Noyce.  He shot it in Vietnam, mostly in Ho Chi Minh City (Saigon).  The release date was set back a couple of years because of the 9/11 attacks and general feeling that the movie was anti-American at a time that movies could not give that perception.  The studio planned to release it straight to video, but Michael Caine convinced them to enter it in the Toronto International Film Festival and it worked.  The reviews were outstanding.  Especially for Caine.  Although he seemed too old at age 68 to play the role of a fiftyish journalist, he nailed it.  He later stated that it was his best performance.  He was nominated for Best Actor by the Academy Awards (losing to Adrien Brody in “The Pianist”), Golden Globes, and BAFTA.

The movie is essentially a love triangle set in a war.  It takes place in 1952 during the First Indochina War (1946-1954).  This was the war where the Vietminh were fighting for independence from French colonialism.  Thomas Fowler (Caine) is an aging British journalist who has been reporting from French Indochina for years.  He is supposed to be covering the war for the London Times, but he has no stake in it and a waning interest.  “I have never thought of myself as a correspondent, just a reporter.  I offer no point of view, I take no action, I don’t get involved. I just report what I see.”  He has succumbed to the languid nature of life in Saigon (for example, he smokes opium) where he has a mistress named Phuong (Do Thi Hai Yen in her debut).  He loves her, but she is a classic concubine.  He can’t marry her because he is in a loveless marriage with a woman who would never agree to a divorce.  Into their placid existence (disturbed only occasionally by the war), comes a dashing young American named Alden Pyle (Brendan Fraser).  He is an American aid worker.  That’s his cover, as he is actually a CIA agent.  Pyle is ambitious and has a plan to advance American interests in his messy war.  His theory is that if a third player is added to the mix of communist Vietminh versus French colonial forces, Vietnam can become a showcase for successfully fighting the Cold War.  Specifically, he wants to funnel aid to a Vietnamese general who will fight both the communist Vietminh and the incompetent French. And if he happens to conduct terrorist activities that can be blamed on the commies, well…  “In a war, you use the tools you’ve got.”  Even after witnessing a well-staged car bombing with realistic carnage, he sticks with his Machiavellian philosophy.  “What I saw made me disgusted, but if it keeps out the communists it’s necessary.”  Fowler and Pyle become frenemies.  Fowler is the cynic, Pyle the idealist.  The triangle is overt as the men compete for Phuong’s affections.  Fowler is at a disadvantage because Pyle is a charming rogue and much closer to Phuong’s age.  It would be a shame if something happened to Pyle.

This is a very adult movie and don’t we adults occasionally want to see one?  You can’t spend your whole adulthood watching superhero movies, right?   And you can’t spend your whole life just watching war movies that feature combat.  This is a war movie, but it is one of those that place the characters in a war setting and have them impacted by the war rather than participating in it.  Fowler is a chronicler of the war, but a disinterested one.  Pyle is a manipulator of the war.  Although the title of the movie refers to him, it would have been better entitled “The American” as he represents the whole country and its involvement in French Indochina at the time.  Although not based on a true story, it probably accurately reflects the machinations of the CIA.  One theme is how Vietnam was corrupted by foreigners.  The French at the time of the movie, Americans like Pyle in the future.  But some Vietnamese, like Phuong, benefit from foreign involvement.

The plot mixes politics with romance.  The love triangle is intriguing and not standard.  Phuong is tugged between the colonial past and the American future.  But, like most Vietnamese, she is only a pawn.  A very lovely pawn.  Hai Yen does not have to do much other than look lovely.  The heavy lifting is done by Caine and Fraser.  Caine is outstanding and deserved the Oscar nod.  He walks the line between hero and villain deftly.  His age helped him portray a man who can’t compete with a younger version of himself.  Fraser is surprisingly good.  He made it just a year after “The Mummy” and it was released around the time his career began to go downhill.  The setting enhances the narrative with plenty of local cover.  The dialogue matches the adult vibe of the film.

If you are a fan of Vietnam War movies, this movie will help you understand how we got into the mess.  It makes a good prequel to “Go Tell the Spartans”.  Before you watch Americans kill commies, see how we got the chance to do that.  And the chance to make movies like “Platoon”.