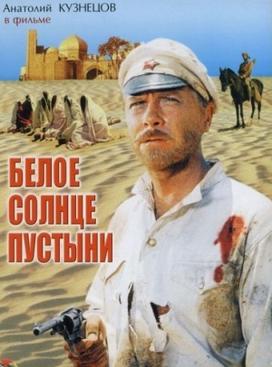 “The White Sun of the Desert” is one of the most beloved Soviet movies.  It was a big hit and even spawned a hit song (“Your Noble Highness Lady Fortune”).  Its soundtrack was also very popular.  It became a lucky ritual for cosmonauts to watch it before launching into space.  Director Vladimir Motyl said he was influenced by “Stagecoach” and “High Noon”.  He meant it to be a blend of a Western and a Russian folk tale.  It is sometimes referred to as an Eastern.

The movie is set on the shore of the Caspian Sea.  Fyodor Sukhov (Anatoly Kuznetsov) is a soldier in the Russian Civil War who is returning home after fighting for several years.  He composes the first of his several letters to his wife which visualizes her in a verdant field.  His homeland is contrasted to the desert he is moving through.  He encounters a man buried up to his neck.  Sayid (Spartek Mishilin) will become his side-kick.  They run into a Red Army unit chasing a guerrilla leader named Abdullah.  Fyodor is given the job of watching over Abdullah’s harem of women.  He knows Abdullah is going to come back and boy will he be pissed, but meanwhile Fyodor tries to liberate the women and bring them into the modern world.  This leads to the part of the Western where the good guy and his buddy defend the women in the fort from attack by the Indians.

“White Sun of the Desert” is not really a war movie.  It is closer to a spaghetti western or a samurai movie.  And like a spaghetti western it is infused with some humor, usually of the low-brow variety.  There is a lot of action of the unrealistic type.  Unlike a spaghetti western, it has some good lines and many have become iconic in Russia.  And I’m not talking about well-remembered quotes.  I mean lines that have entered Russian slang. For instance, the silly line (which was ad-libbed) “His grenades are the wrong caliber” became a way of saying someone’s excuse was pathetic.  A highlight of the template is Sukhov’s letters to his wife, which serve as narration.  “I’m writing to you again, dear Katarina Matveyevna” became an amusing way to open a letter that would have lots of details or was one of a series of letters.

The movie is entertaining, if you find spaghetti westerns to be entertaining (which I usually don’t).  Sukhov and Sayid are appealing characters.  Abdullah is one bad-ass villain.  You have to be impressed with the girls, not because of their looks (they wear burkas most of the time,) but because most were amateur actresses.  It is a fun little movie.  And by little, I mean 1:20.  Just the kind of light-weight movie you would want to watch before blasting into outer space.