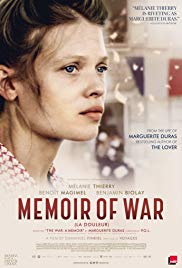 “Memoir of War” is a French war movie directed by Emmanuel Finkiel.  It is also known as “Memoir of Pain”.  It was submitted by France for Best Foreign Language Film for the Oscars, but not selected.  The title refers to a journal that the main character keeps.  The movie is set in occupied Paris in 1944-45.  Marguerite (Melanie Thierry) is alone due to her communist resistance husband Pierre who has been imprisoned by the Germans.  She meets a Gestapo collaborator named Pierre (Benoit Magimel) who offers to help her make contact with her husband and lighten his treatment.  He wants her to rat out the resistance cell she is involved with.  Their relationship is strange.  She refuses to give in to his advances, yet he does not get upset about this.  As time goes on and her husband’s plight becomes more dire, the pressure mounts for her to collaborate.

“Memoir of War” is dominated by Melanie Thierry.  The camera loves her. There is a lot of soft focus, or maybe it was the cigarette smoke.  There is a lot of smoking in this movie.  Thierry is good, but not great and the character is not particularly appealing.  You do feel for her as she waits for a husband who may not return.  The journal allows for some narration by Marguerite that is nicely literary.  It’s a long wait as the movie is overly long and tends to drag.  The Resistance can be fodder for a good story, but “Memoir” does not mine the subgenre for an intriguing tale.  Actually, it is not really a resistance movie.  Marguerite hangs around on the periphery of the cell.  She is not involved in any operations and the movie does not have any tense resistance operations.  Instead, it concentrates on her weird relationship with Pierre.  Unfortunately, the back and forth between them is unrealistic.  We are conditioned to look upon collaborators as either despicable villains or people who are forced into a despicable situation.  Pierre is neither.  He apparently is under no pressure from his Gestapo bosses.  He clearly wants to bed Marguerite, but not enough to push his weight around.  Even more bizarre, the cell knows about Marguerite/Pierre and does not seem too concerned.  She could get them all killed and they know she is desperate to help her husband.  That’s one trusting group.

“Memoir of War” is a decent movie if you want to watch a war movie with your girl-friend or wife.  It should provoke conversation along the lines of “what would you do if you were Marguerite?”  But you might also argue over whether her relationship with Pierre makes any sense.  It’s never good if people are leaving the theater shaking their heads.  Or squirming in their seats waiting for Robert to return, already!