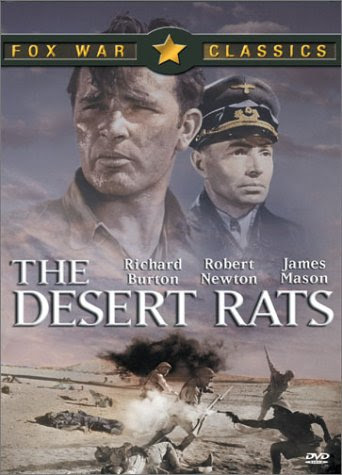 BACKSTORY:   “The Desert Rats” is a black and white old-school war film released in 1953. It is an unofficial sequel to the biopic “The Desert Fox” and James Mason portrayed Rommel in both. “Rats” is set in the siege of Tobruk in 1941. It lauds the 9th Australian Division’s role in the defense of the port. It was directed by Robert Wise who later won Oscars for “The Sound of Music” and “West Side Story”. It stars Richard Burton in only his seventh film.


OPENING SCENE:   The movie opens in the Libyan desert in 1941. Rommel arrives at headquarters and plots the conquest of the Suez Canal, but the port of Tobruk must be taken first. The narrator informs us that we are about to witness the story of Tobruk and the “Desert Rats” who defended it.

SUMMARY:  At the headquarters of the 9th Australian Division, the general (never identified as Major General John Lavarack) goes over his plan. He thinks he knows where the next attack will come and plans to let the German tanks penetrate then hold them with infantry and counterattack with his tanks. He sends “Tammy” MacRoberts (Burton) to take command of a newly arrived green company.

MacRoberts finds that his new unit is ill-disciplined and is shocked to be reunited with his old schoolmaster Tom Bartlett who was canned for alcoholism and ended up enlisting although he has neither the mentality nor the skills to be a good soldier.

Our first big set piece is a German tank attack set in a sand storm. The audience can feel the grit in their teeth. The sound effects are also good. The Australians allow the Germans to penetrate as per the plan and then open fire. The movie blends actual footage with the action. Burton gets to play action hero as MacRoberts gets in a damaged tank and destroys a German tank to force the enemy to retreat.

MacRoberts is hard on the men and they gripe about it. He wants to court-martial an officer named Carstairs who left his position to try to rescue another officer. He believes you must follow orders with no sentiment. The schoolmaster informs MacRoberts that he is a coward (as well as a drunkard), but he wants to stay with the unit. He argues that the officer should not be court-martialed, but should be given another chance. Mac reconsiders. This is an interesting scene with its debate of orders versus human nature.

Mac is promoted to command over the battalion. The film shows a montage of raids behind enemy lines to keep the Germans off guard. These are small affairs until Mac proposes a raid on an ammunition dump to foil an anticipated offensive. 53 men in captured Italian trucks sneak into the depo. There is lots of action. MacRoberts is wounded and Carstairs comes back to him set off an explosion but is killed. (War movie cliché #2 – redemption of the shamed soldier) Mac is captured.

Mac is being treated by a German doctor when a wounded Rommel (Mason) arrives. They discuss the siege and the British captive cheekily argues that the Germans will not take Tobruk. Rommel is irritated by MacRobert’s gall, but respects him. This scene was supposedly put in the movie after the backlash from veterans over the sympathetic treatment of Rommel in “The Desert Fox”. This explains why Mason plays Rommel as a villain here and gives him a thicker German accent.

The truck transporting MacRoberts and other prisoners is strafed allowing him and Sgt. “Blue” Smith to escape. They walk back to friendly lines through the desert.

The narrator informs us that the siege has now gone well past the two months the Australians had been told they would have to last. MacRoberts’ battalion is given the task of taking and holding a hill that is the key to keeping the anticipated relief route open. The movie skips over the first eight days of the fight on the hill and focuses on the ninth day. The men have been under intense pressure and Mac is given the option by headquarters to withdraw if he sees fit. He sees fit, but Bartlett argues that the men will stay and fight for him even though they don’t like him. Here we encounter once again the war movie theme of a tough disciplinarian earning the respect of his men. Not surprisingly, the men refuse to leave the hill.

FINAL SCENE: The Germans open a ferocious barrage on the hill. The men take refuge in their holes which is realistic to what actually happened at Tobruk when German artillery opened fire. The film shows how men can survive under bombardment. When the explosions end, the men fix bayonets to meet the attack, but they hear bagpipes signifying the arrival of the relief column and a happy ending.

Acting - 7 Burton is good, the rest are average

WOULD CHICKS DIG IT?    Highly unlikely. There are no female characters. It is an old-school, guy action film.

CRITIQUE: “The Desert Rats” is a classic of its type, but does not hold up well over time. It does its best with the effects available back then. The bombardments are realistic and the sounds are appropriate. Your ears feel like they are in a battle.  The cinematography is very good and the fact that the movie is black and white makes no difference since there would have been little color in the scenes anyway.

The soldiers and their situation are portrayed realistically, although the movie does not violate cliché #9 (soldiers do not sweat). Especially commendable is how the movie shows that humans can survive a vicious bombardment by burrowing.

MacRoberts is a typical movie officer and his transformation from hard-ass to a leader who is willing to listen is believable. He exemplifies clichés #18 and 19. #18 insists that a strict officer will soften at the critical moment of the film. #19 holds that harsh disciplinarians will earn the grudging respect of their men by the end of the film. He also serves as something of a role model for future officers. Not West Point study-worthy, but I could see myself highlighting his evolution as a leader in my Military History class.. Having the schoolmaster thrown in is a bit of a stretch, but necessary for Mac’s transformation. The character fits well into the wise, elderly noncom stereotype. If you are older than the rest of the unit usually you kept getting demoted for misbehavior, but here he enters old as a result of alcoholism. Nice touch.

As a history lesson, the movie has its flaws – beginning with the title! The “Desert Rats” were the British 7th Armoured Division. I wonder what their veterans thought of the movie. When Rommel laid siege to Tobruk, the Germans referred to the British/Australian forces as being “caught like rats in a trap”. The 9th Australians proudly adopted the name “Rats of Tobruk”. Obviously the producers felt “Desert Rats” had a better ring to it and evoked “The Desert Fox”.

The raiding is accurate and did result in preempting several attempts at penetration. However, I could find no evidence of a large raid on an ammo depot. As to the ending, the relief that came from Operation Crusader arrived after the 9th Australian Division had been withdrawn from Tobruk for much needed R&R.

Other than the unnamed Australian general and Rommel, none of the characters are real people (as far as I can tell). MacRoberts is a stock movie character, but carried off with panache by Burton.

CONCLUSION:   “The Desert Rats” is an entertaining old school WWII movie. The acting is pretty good and Richard Burton shows why he was such a big star. It is fairly realistic and does not go over the line on historical accuracy. Given the available war movie effects technology, it does an okay job depicting combat. However, if you are expecting “Saving Private Ryan”, forget it.

It is a good example of how pre-1960’s war movies rarely hold up. There are numerous recent war movies that did not make the Top 100 that are better movies than “Rats”. Once again, I must insist that just because it’s old does not make it better than “Enemy at the Gates”, for instance. And I can assure you from personal experience that no audience of today’s youth would prefer to watch “The Desert Rats” over “Enemy” or “When Trumpets Fade” or “300” or pick a recent war movie that did not make the Top 100.