DUELING MOVIES: The Enemy Below vs. The Bedford Incident 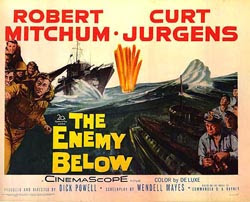 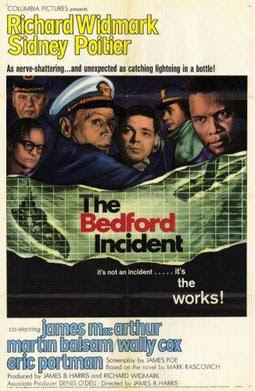 Two of the best cat-and-mouse submarine movies were “The Enemy Below” and “The Bedford Incident”. They both feature a deadly duel between an American destroyer and an enemy submarine.


“The Enemy Below” was released in 1957. It stars Robert Mitchum as Capt. Murrell, the new captain of the escort destroyer USS Haynes. He has recently survived a sinking by a u-boat and the crew is skeptical about his seaworthiness and his command ability. When a u-boat is picked up on sonar, Murrell becomes obsessed with tracking and destroying it. There are some shades of “Moby Dick” in the plot.

The u-boat captain Von Stolberg (Curt Jergens) is not a fanatical Nazi (he’s the typical good German that you get in Cold War era movies). In fact, he is bitter and disillusioned (“They’ve taken the human out of war.”) Both captains are philosophical and good leaders. They are well-matched.

The movie does not break much new ground. We get the clichéd depth chargings and torpedo dodging. At one point the sub releases oil to throw off the destroyers sonar (wait, what?) The u-boat descends to hide on the bottom, well below its maximum depth (wait, can it do that?). It springs leaks – get the wrenches! The chase is a lengthy one and very stressful, but you can’t tell it from the spiffy garb and proper grooming of both sides. Also, that is one spacious and pristine u-boat!

The climatic showdown has the destroyer being torpedoed. Murrell lures the sub onto the surface by having mattresses set afire to give the impression the Haynes is a sitting duck. Von Stolberg takes the bait and surfaces resulting in the u-boat being rammed. In fact, the Haynes ends up on top of the sub. Both  are mortally wounded. Which of the two captains, who have grown to respect each other, will survive?

“The Bedford Incident” was released in 1965 and is set in the Cold War. This time the duel is between the destroyer USS Bedford and a Soviet sub. The U.S. Captain Finlander (Richard Widmark) is tightly wound and chafing over a recent lack of promotion apparently for some jingoistic remarks. He considers his ship to be a hunter and a stalker. He says “there is something exciting about the hunt.” On board comes a reporter named Munsford (Sidney Poitier) who is determined to ferret out Finlander’s woodshed moment. They immediately butt heads and continue to. The ensemble includes former u-boat commander Schrepke (Eric Portman) who is an advisor from NATO. He is on our side now so he is the sanest and most stable person on board.

Off Greenland, the Bedford detects a Soviet sub and Finlander decides to force it to the surface even though NATO orders him to back off. Finlander is a Curtis Lemay disciple – we shouldn’t be coddling those commies. He goes after the sub in spite of it being in international waters. We get a lot of control room scenes and pinging noises. Finlander gradually descends into Ahab territory. The crew is loyal to their charismatic leader, but Munsford, Schrepke, and the doctor Potter (Martin Balsam) are aghast. Finlander is one hardass SOB who is not interested in the pansies’ opinions. The tension builds until mutually assured destruction comes true.

The movies have similarities beyond the cat-and-mouse plots. Both feature a “good German”. Both are claustrophobic. Both have a black characters (TEB has a messmate). The opponents are well-matched. They are both excellent studies in leadership – good and bad.  Interestingly, the command arcs are the opposite.  In TEB, new captain Murrell has to earn the respect of his skeptical crew.  He does that through cool, efficient decisions.  On the other hand, Finlander starts as a strict, but worshiped leader and turns into a tyrant. The acting is very good in both and both are anchored by strong performances by the American captains.  Slight edge to Widmark.

They differ in themes. TEB is focused on the mutual respect that develops between worthy opponents. TBI is focused on the obsession of a Cold Warrior. It is also concerned with the effects of Cold War tensions and the big “what-if” – what if Mutually Assured Destruction is a flawed strategy? The movie definitely has a Dr. Strangelove (1964) feel to it. But none of the humor.

It’s a close call, but “The Bedford Incident” is the superior movie. The themes are more engaging and suspenseful. It’s scarier because a Cold War audience would have related directly to what they were seeing. It also is less orthodox and cliché-ridden. Ironically, although it came out eight years later, “The Bedford Incident” is in black and white and “The Enemy Below” is in color. TBE actually looks better as the black and white cinematography really brings vividness to the icebergs that are frequent backdrops. Another advantage is it has Wally Cox as a radarman, not to mention a very young Donald Sutherland as a scientist that examines trash from Soviet subs.

Watch both together like I did, they make a great doubleheader.  Watch "The Enemy Below" first, you'll see why.