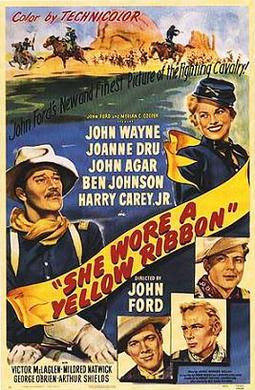 BACK-STORY: “She Wore a Yellow Ribbon” is a western/war movie released in 1949. It was the second of John Ford’s cavalry trilogy and the only one in color. The other two were “Fort Apache” and “Rio Grande”. All three starred John Wayne. The movie was set in Monument Valley. Ford used the paintings of Frederick Remington for inspiration and ideas. The title is a song associated with the U.S. Cavalry and alludes to the cavalryman giving his love a yellow ribbon. One of the stars is the horse “Steel” ridden by Ben Johnson. This horse was popular with western stars. The movie was awarded the Oscar for Best Color Cinematography to Winton Hoch. The film was a big hit.


OPENING: The movie opens with the iconic theme song. A narrator informs us the story takes place after Custer’s Last Stand. Word spreads via the telegraph and Pony Express. The Indian tribes are in rebellion and are uniting “in a common war against the U.S. Cavalry”. At Fort Stark, the elderly Capt. Nathan Brittles (Wayne) is only six days from forced retirement. Sgt. Quinncannon (Victor McLaglan) is also near the end. He is Irish so he drinks a lot, but in a humorous way.


SUMMARY: The death of the paymaster by Indians clues the fort in to the fact that the Southern Cheyenne are on the warpath. They know it’s the Southern Cheyenne due to the markings on their arrows. That night Brittles make his nocturnal visit to his wife and kids’ gravesite. In a touching scene, he talks to her. The commanding officer decides his wife Abby (Mildred Natwick) and niece Olivia (Joanne Dru) need to go back east via the stage coach. He orders Brittles to escort the ladies to the stage station and shoo the Indians back to their reservation. Olivia is wearing a yellow ribbon, but for who? Her suitors are Lt. Cohill (John Agar) and Lt. Pennell (Harry Carey, Jr.). Cohill is the career trooper who is not romantic and Pennell is the wooing easterner who is willing to leave the Army for Olivia. The one time they are going to duke it out over her, Brittles breaks it up. Guess which one she ends up choosing? Hint: the one she argues with the most. Snippiness = love in Hollywood.
The mission takes the unit through some beautiful scenery and they even encounter a buffalo herd. The Indians feel the return of the buffalo is a sign that their medicine is working. Brittles sends ex-Rebel Sgt, Tyree (Ben Johnson) and his horse (Steel) to locate a patrol. When asked for his opinion on matters, Tyree famously responds with: “My mother didn’t raise any sons to be makin’ guesses in front of Yankee captains.” Surprise, Tyree runs into a passel of whooping Indians (the Indians whoop a lot in this movie). There is an exciting chase scene that ends with Steel jumping over a canyon. The patrol also gets chased by Indians, but finds refuge with the column. One of the men is wounded which requires a bullet extraction in a moving wagon with the back drop of a lightning storm. This was not part of the filming schedule, but Ford insisted over the protest of Hoch that the situation be used. Great call!
The stage station has been raided, so no stage coach for the gals. One of the dead is an ex-Confederate general serving as a private. The U.S. Cavalry was an institution of reconciliation after the Civil War. Brittles and a few others sneak up on an Indian camp to witness the Indian agent selling repeating rifles to the warriors. Things go bad for the villainous whites and Brittles stoically watches the torture of one of them. Does anyone want a chaw of tobacco?

The mission is a failure and the unit has to cross a river to return to the fort. Brittles leaves Cohill and two squads behind to guard the ford. The unit slogs back into the fort and the next day Brittles awakes to his last day in the Army. The movie needs a dose of humor and fisticuffs so Brittles has Quinncannon put on his “monkey suit” and go to the canteen for a drink and then orders his arrest for being out of uniform and drinking. (I did not quite follow the reasoning behind this – something about Quinncannon would be better off spending the rest of his enlistment in the brig. Anyway, it was an excuse to have a barroom brawl). The Quinncannon versus six fight is entertaining and worth the ridiculous setup.

Brittles gets a sentimental farewell from Company C that includes a silver pocket watch. Touchingly, he has to pull out his spectacles to read the inscription. He is off to California (with just the clothes on his back?), but ends up joining Pennell who has been sent to rescue Cohill. Cohill doesn’t need rescuing (in a missed opportunity for gratuitous shooting of whooping Indians off their horses), but there is still that Southern Cheyenne problem. Fortunately, Brittles still has four hours available. He rides into the Indian camp to smoke the pipe with old friend Pony that Walks (Chief John Big Tree in an endearingly eccentric performance). The chief tells Nathan that he has no control over the young men. Oh well, enough talk.

Brittles locates the Indian pony herd and stampedes it through the Indian village that night. Although it is a surprise, the Indian braves come running out of their tepees fully clothed. No troopers are even wounded and I did not see any Indian casualties either. Indians without horses must return to the reservation. Insurrection over.

CLOSING: Brittles rides off into the sunset (literally) which would be an appropriate ending, but a letter arrives promoting him to Lt. Col. of scouts and Tyree rides off to bring him back. His return interrupts the celebration of the engagement of Cohill and Olivia. Brittles goes to update his wife on his promotion.

WOULD CHICKS DIG IT? Probably. It is definitely not hard core. What little violence there is, is tame. The love triangle is lame, but it does not consume the movie. Millard Natwick as Abby is feisty and has some good moments (e.g., the wagon operation scene). Joanne Dru is out of her league here, but is adequate.

ACCURACY: The movie is not based on an historical event, but the opening narration could give that impression to a gullible audience. The narration starts the movie off on a shaky historical footing. The only thing it gets right is Custer was defeated. The Indian tribes seem to be randomly selected. The Kiowa, Comanche, and Apache were not involved in the Battle of Little Big Horn and the statement that the various tribes were united against the U.S. Cavalry is laughable considering the inability of the tribes to unite on anything. There was no Indian uprising. The Indians were simply fighting against white encroachment into their lands.. Custer’s Last Stand did not result in tribes leaving the reservations. The ones that were at war either were already off their reservations or, more likely, had never been confined to one (yet). The reference to the Pony Express spreading the word is very sloppy history. It had ceased to exist fifteen years earlier.

The depiction of the cavalry is pretty realistic, although a bit idyllic. Ford is paying tribute to the “dog faces” and their thankless task of taming the West, but it is a no warts portrayal. All of the troopers are respectful gentlemen who are dedicated to their duty. They all are dressed for parade. There is no salty soldier talk and that’s not just because Quinncannon tells them to “watch them words”. (Followed by an anonymous “watch them grammar”.) There are no negative characters in the unit. The two suitors are respectful of each other. Brittles gets along well with his commanding officer. There is little tension. The ex-Confederates don’t even get teased. Only one trooper is a drinker and he is shown in a positive light. A typical western fort would not have been as “clean” as this.

As far as the Indians, they are typical John Ford caricatures. They are all dressed for the Hollywood warpath. Lots of reds and war bonnets. These are the best dressed Indians on the Plains. No poverty here. One accuracy is the inability of the elderly chiefs to control the young men. And there is a travois in one scene.

CRITIQUE: “She Wore a Yellow Ribbon” is a good Western. Ford is Ford. Wayne is not Wayne. Both of those statements are a good thing. This being a typical Ford movie, the use of Monument Valley is awesome. The theme of the selflessness of the cavalry is well done, if a bit overdone. The characters are stock, but entertainingly so. The movie does not force a heterogeneous, multi-ethnic unit on the audience (which is actually not realistic to the post-Civil War Army, by the way). Wayne fans will be comfortable with the familiar faces in the cast, especially McLaglan.

The movie is well acted. Wayne is outstanding in playing against type. He was only 41, yet plays a 61 year old. Brittles is a grizzled veteran, but he has not been hardened by his experiences. He is a father figure to his men. He takes Olivia under his wing and mentors Cohill and Pennell. He is a loyal friend to Quinncannon. He was obviously a caring husband and father. There is no strutting here and in fact Wayne adds nice touches like arthritis in the joints.

The score is hit and miss. Invariably, when the Indians appear, we get generic Indian music. You could have your eyes closed and be able to tell who is on screen. However, the music is tempoed according to the action which adds to the scenes that have movement. The theme song is effectively used at strategic moments.

The movie is beautiful to watch. The cinematography is outstanding. The reds are a bit distracting though. The use of the lightning storm was clever and it is ironic that Hoch complained about the lighting considering that scene probably helped win him the Oscar.

It is commendable that Ford does not go for mindless action and wanton killing of redskins, but he perhaps went too far. Other than the Indian agent, I cannot recall anyone getting killed. He strands Cohill and the forlorn hope at the river crossing with the implication of dread, then there is no payoff. The stampede of the herd through the village is thundering, yet bloodless. Even the fight between Cohill and Pennell is aborted. The only real fight is a comical one.

CONCLUSION: “She Wore Yellow Ribbon” is an entertaining Western, but it is not a war movie and does not belong on this list. I have a problem with taking a movie that is firmly in one genre and then putting it on a list of great movies in another genre. There are few Westerns that I feel can clearly be considered war movies and Westerns. A rare example of this hybrid would be “Son of the Morning Star” which is specifically and accurately about a battle in the Indian Wars (the Battle of Little Big Horn).