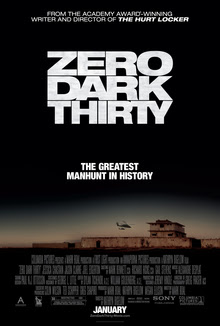 I rushed to see a movie today that I have been waiting more than eleven years for.  Ever since 9/11/2001.  For a few years, I had almost lost hope that the subject would ever arise.  Thank God it finally came to pass.  Then I had to worry about how Hollywood would handle the inevitable film treatment(s).  You know screenwriters immediately got to work on a rush take on it.  I really wanted to “see” the death of the most evil man of my lifetime, but I know that if inferior film comes out first, it poisons the waters for later takes.  When I heard that Kathryn Bigelow and Mark Boal (both of “The Hurt Locker”) were preparing a version, I felt a little more confident.  I need not have worried.  The other productions can shut down.  We now have the definitive retelling of the greatest manhunt in history.  It turns out that manhunt was led by a woman.
The movie is amazing and is built around one of the outstanding real-life heroines in cinema history.  Jessica Chastain should win the Oscar for her performance as Maya.  She portrays the CIA operative as obsessive and persevering (to the point of being a pain in the ass for her superiors).  Her evolution from naïve to hard as nails in the world of black sites is a theme.  How ironic that the actual role model will not be able to reap the fame (at least not for a while, hopefully).  Bigelow and Boal made a great decision to concentrate on this woman and build up to the mission by showing the frustrating quest to locate UBL (the movie does not dumb it down for the current events-challenged masses).  Chastain is well-supported by a strong cast.  It’s not all-star, but you’ll recognize many solid performers.  The biggest surprise is Chris Pratt (from the wonderful “Parks and Recreation”) as a Navy SEAL.  Informed choice, considering elite military types often have good senses of humor.  By the way, there is also a major part for one of my favorite actresses- Jennifer Ehle (the miniseries “Pride and Prejudice”).
I won’t give away the plot.  The movie works on two levels.  If you are like me and have a working knowledge of the war on terrorism, it is exciting to see some key events reenacted masterfully.  It does help to know the basics.  The dialogue assumes that.  There are numerous references to KSM (google his ugly ass).  I almost envy the majority of Americans who will find the entire movie suspenseful because they do not know what will happen next.
The movie opens chillingly with a blank screen (no opening credits) and audio from phone calls from victims of 9/11.  Just in case you needed to be reminded about the stakes.  It closes with the mission.  In between is a fascinating quest to locate the most wanted man on Earth.  Bigelow throws in some shocking acts of terrorism to juice the narrative.  The reenactment of mission is mesmerizing even for those who know what will happen.  The flight into Abbottabad  has the best use of music that I can recall in a scene like this.  Not bombastic.  I would best describe it as SEALish.  The “assault” is a blend of POV and fly on the wall cinematography.  It is not frenetic like in “Act of Valor” (a movie I love).  You won’t feel like you are playing a first person shooter.   You will be on the edge of your seat.
Interestingly, the movie does not do the cliché of describing the mission plan.  After all those days of waiting (angrily tallied on her bosses window by Maya), we are suddenly thrust into the big night.  This was a good decision for both the informed and the historical illiterates.  It also does not flesh out the SEAL characters.  However, small touches make it clear they are not only heroes, but professionals.  There is an understated scene where Maya watches them play horse shoes and is stunned to learn that they know they are going on the mission that very night.  Subtle, but brilliant.  The movie also avoids the cliché of the corrupt or clueless authorities.  No Americans are villains.  It does take to task the risk-averse, but they are portrayed as simply too careful.   Then again, Maya is portrayed as an obsessed bitch.  Thank God she was!  CIA Director Leon Panetta comes off well, but there is little reference to Obama and none of George W. Bush.  The movie does not lionize Obama for giving the green light.  It does not demonize Muslims.  In fact, a CIA official is tellingly depicted on his prayer mat.
As far as accuracy, I could detect nothing egregious.  I have read extensively on the subject.  I read “SEAL Target Geronimo” and the mission is basically as chronicled in that book.  The movie does not add any explosions.  It also does not sugar coat what happened in that compound.  Spoiler alert:  there is no attempt to take UBL alive.  As to the controversial depiction of torture and the actionable results from inhumane interrogation, I would be surprised if those types of things did not happen.  You may want to believe otherwise, but get your head out of the sand.   It is a crying shame that the ostriches will prevent this movie from a deserved Best Picture Oscar.  It is a travesty that they have already deprived Bigelow of a director nomination.
In conclusion, “Zero Dark Thirty” tells the story many have been waiting to see.  It does it in a well-crafted way that does justice to history.  It is better than “The Hurt Locker” and “Lincoln”.  It will have its detractors and where you stand on this is telling.  I’m not sure if it is a war movie, but whatever genre it falls into- it is outstanding.