On the second day of Christmas, my true love gave to me, two feuding Vikings … 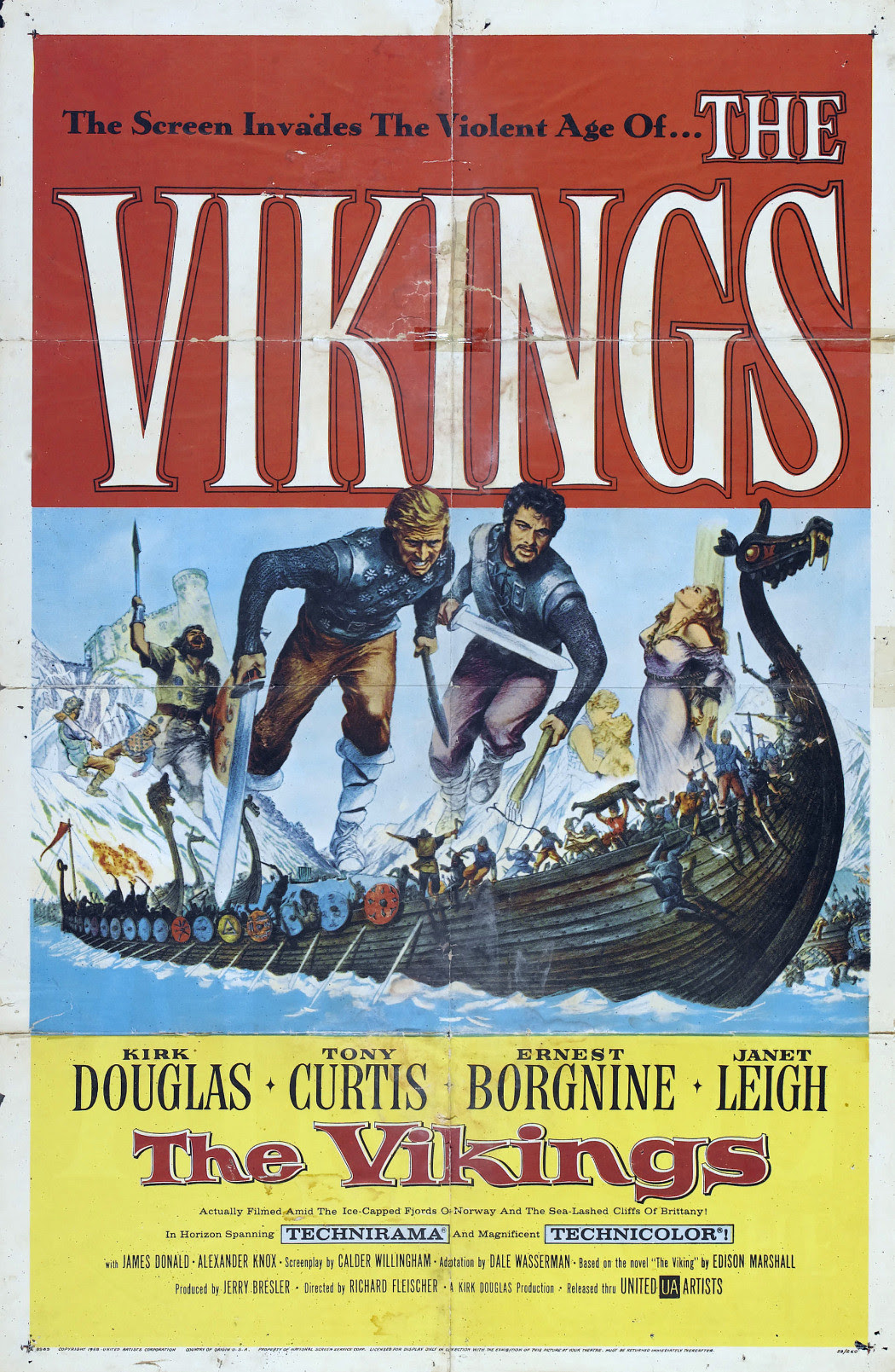 “The Vikings” has been called a “Norse opera” because it combines Western elements with a soap opera feel.  It was directed by Richard Fleischer with much input from his star Kirk Douglas.  It was filmed in Norway to take advantage of the lovely fjords.  The film makes efforts to throw in a greatest hits of Viking warrior culture - for entertainment purposes.


The story begins with Ragnar (Ernest Borgnine) raiding England, killing a king, and impregnating the queen.  The new King Aella sends the baby off into exile and years later Erik (Tony Curtis) arrives in Norway as a slave.  Ragnar’s legitimate son Einar (Douglas) is a vain playa, but great warrior.  He and Erik take an instant dislike to each other which is aggravated by the fact that Erik’s falcon takes out one of Einar’s eyes.  Ragnar sentences Erik to death-by-high-tide, but Odin saves him.  Later, Erik rescues the kidnapped princess Morgana (Janet Leigh as Aella’s bride) from the lusty Einar.  Strike two.  Erik sails to England using a magic metal that points the way through a fog which causes Ragnar’s ship to crash into rocks.  Strike three.  Erik rescues Ragnar and turns him over to Aella for death-by-wolf-pit (but Erik gets major Viking props for slipping Ragnar a sword so he can die a Viking’s death).  Erik is kicked out of England sans left hand and forms an awkward alliance with Einar to get Morgana back.  They’ll figure out who gets her later.  This leads to the big castle-storming scene and inevitable duel.  Both of which are rousing.


Before I go any further, this is not really a war movie.  With that said, it is entertaining, if implausible.  Lots of things have to fall into place to reach the action-packed finale.  The acting is okay, but Douglas is not his usual outstanding self.  He tries too hard, as does the movie which vainly tries to reach epic status.  This includes the pompous epic wannabe score.  Borgnine has a fine time, Curtis is handsomely noble, and Leigh is ravishing (and ravish-worthy).  Speaking of out-standing: Leigh’s breasts.  (see below)  The locales are awesomely scenic and we get a lot of local color in the form of manly Viking activities.  Fleischer crams in as many as the film can hold.  The Vikings are caricatured.  They spend most of their time getting drunk and engaging in manly contests like “Running the Oars” (that’s really my man Kirk risking his life!) and cutting the braids of an adulteress with throwing axes.  These are the same carousing berserkers who are so afraid of the fog they always sail within sight of land. The Vikings were such wimps.  Unless they have a magical metal England-finder.  Kudos for the accurately constructed longboats and for not putting horns on their helmets.  Beware:  this movie has extreme violence for a 1958 movie.  (Some critics were shocked by the wolf pit scene and Ragnar was not even shown in the pit!  Quaint.)  So if you are a grandma, you should avoid it.