On the ninth day of Christmas, my true love gave to me – nine Seabees a constructing 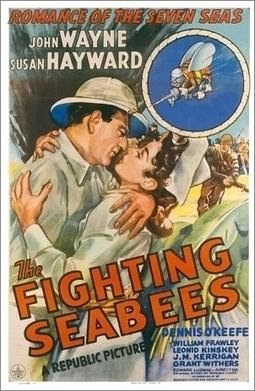 “The Fighting Seabees” was a WWII flag-waver that fired up audiences in 1944.  It was directed by Edward Ludwig, but who cares since it stars John Wayne.  The film is dedicated to the Civil Engineer Corps and the Construction Battalions (CBs = Seabees) which “fired the imagination of the world with their colorful exploits throughout the Seven Seas.”  If you are hoping for a history lesson to go along with the lauding, forget it because the movie is highly fictionalized.


Wayne plays Wedge (awesome name!) Donovan who owns a construction company that has been doing airfield building in the Pacific.  He is very upset with the fact that the Navy did not allow him to arm his men and they had several killed recently.  The Navy liaison Lt. Commander Yarrow (Dennis O’Keefe) tries to explain the reason for this sensible rule, but Donovan argues that if you can work construction you can kill “Tojo and his bug-eyed monkeys”.  He also throws in this classic line:  “If you can drink, you can fight.”  Love triangle alert:  Donovan takes an interest in Yarrow’s girl Connie (Susan Hayward).  She’s a journalist which gives the movie an excuse to have her follow Donovan to tropic islands.


Donovan gets a new airstrip job on Island X-14.  They go without needing “no stinking training.”  When a Japanese force invades the island (using apparently stolen Higgins boats), Donovan mother-hens his men and Connie into a shelter but when strafing kills three idiots standing around outside, the gloves are off and the guns are out.  The Seabees come storming onto the battlefield like a mob of pissed off hillbillies and foul up a planned kick-ass ambush by Yarrow.  To make matters worse, the abandoned but curious Connie gets wounded.  The combination of dead men and wounded starlet leaves Wedge contrite and willing to do it the Navy way.  He is made a Lt. Commander because he is John Wayne.


Recruitment and training montage complete with the “Song of the Seabees”.  More romance as Yarrow gradually realizes it’s hopeless to compete with a guy named Wedge (plus he’s John Wayne, for God’s sake).  The love triangle heads off to island number two.  The Seabees encounter sniper problems which culminate in the death of Eddie Powers (William Frawley of “Lucy” fame) while singing an Irish song.  It’s on now!  Donovan disobeys orders and takes almost his entire battalion into the jungle to sniper-hunt.  Wouldn’t you know the scheming little monkeys choose this moment to attack the lightly defended airstrip.  Yarrow is wounded in the defense, but Donovan leads a counterattack that does not dissuade Yarrow from threatening him with court-martial for disobeying orders.  Wedge doesn’t seem too concerned because he’s read the script.  He knows there’s no court or courting in his future.  But there is a fiery bulldozer ride.


I am a big John Wayne fan (men of my generation are required by law), but I had never seen this movie partly because I figured constructing airfields would be boring to watch.  I was wrong about that as this movie has more action than most war movies.  It’s Old School with touchdown signaling deaths and no blood, but still fun to watch.  You get to see a Japanese sniper in a tree killed by a grenade and another grabbed by a clamshell bucket (previously only seen in the play-rooms of toddlers).  Just suspend reality.  The movie keeps the fourteen year old boys happy and the construction scenes with all the heavy machinery keep the four year old boys happy as well.  Some of the kudos for action are cancelled by the romance, unfortunately.  Too much mushy.  However, it is a bit unconventional as O’Keefe does not put up much of a fight and Donovan does not want to poach so you wonder who will be saddled with this vivacious, sexy, intelligent dame.  The movie solves the dilemma in a predictable way.


The acting is fine.  Wayne plays Wayne, of course.  We do get to see him do the jitterbug, so he does stretch a bit.  Susan Hayward is one of his better leading ladies and holds her own in a sassy way.  O’Keefe is a bit stiff, but it’s a thankless role.  The ensemble of hard-hats is fine with some recognizable character actors like Frawley and Paul Fix (the Marshall in “Rifleman”).  The dialogue of the crew is pretty witty.  Unfortunately, other than the big three, there is little character development other than they are all alcoholics and brawlers.  The music alternates between rousing and sappy romance.  This is the kind of movie where the men sing a song.  When is the last time a war movie had that?


The biggest problem with the film is it is laughable historically speaking.  The Construction Battalions were created in WWII and recruited from civilian construction workers (the average age was 37), but they went through extensive training from the beginning and there was no controversy about arming the men.  In fact, the slogan of the Seabees was “We build, we fight.”  They were often under fire and had to fight on Pacific Islands.  They deserved the movie and probably did not complain too much about the implausibilities.


Christmas gift?  Gifts –  a toy gun and a Tonka truck.