Here is the full list:
God is My Co-Pilot
The Vikings
The Mark of Cain
Never So Few
El Alamein
The Wild Geese
An Ungentlemanly Act
Bravo Two Zero
The Fighting Seabees
The Cockleshell Heroes
Heartbreak Ridge 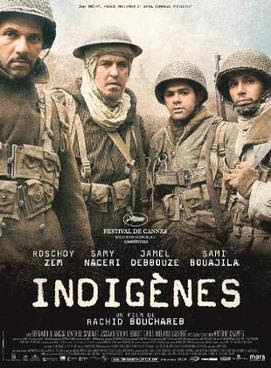 On the twelfth day of Christmas, my true love gave to me  -  twelve indigenes invading


“Days of Glory” is a French movie about French Algerians who volunteered to be Tirailleurs in the Free French army during WWII.  The French title is “Indigenes” which refers to them being indigenous people.  The movie was released in 2006 and won several international awards and was nominated for the Oscar for Best Foreign Film.  The movie had a goal of achieving pensions for the Algerian veterans.  Admirable.


The film opens in Algeria in 1943.  We are introduced to the main characters.  Said (Jamel Debbouze) is  a shepherd who is loyal to France and leaves his mom to fight the Germans for French independence.  Yassir and his brother are two thieves who want out, but loot in the meantime.  Messaoud (Roschy Zem) hopes to live in France.  Abelkader (Sami Bouajila) is an intellectual.  They join a unit led by Sgt. Martinez (Bernard Blancan), who turns out to be a self-loathing Arab.  The unit is sent to Italy where it distinguishes itself, but is used as cannon fodder by the French.  They are sent to storm a hill so the French artillery can pinpoint the German strongpoints.  The scene is pretty good with effective sound effects and explosions.  Slightly graphic with some hand-held, but no slo-mo.  From this point on the movie strives to develop the theme of French racism toward its Algerian troops.


The men are shipped to Southern France as part of Operation Dragoon.  Messaoud makes a love connection with a French woman, but when they move on the French censors stop their letters because she is white and he is Arab.  Neither one knows this.  The unit is not given promotions (or tomatoes) and few leaves in comparison to their white counterparts.  To make up for this treatment, they are “treated” to a ballet!  They walk out in disgust.  As would I.


The big pay-off is a suicide mission into a forest in Alsace.  A booby trap kills most of the squad including Yassir’s brother.  The surviving ensemble takes refuge in a friendly village and the movie becomes a last stand when German forces arrive.  Who will survive?  Do we care?  Yes.


The film is well-meaning and deserves some slack for that.  However, as a war movie, it is pretty boring.  This is especially apparent because the highlight is the hill attack scene and it occurs towards the front of the plot.  What combat there is is too brief, although well done.  There is little character development.  The very brief character identifications I gave in the second paragraph are pretty much all I can tell you about the men.  The actors are decent, but to tell the truth some of them are not easy on the eyes.  Yassir, Said, and the Sergeant are unappealing both visually and personality-wise.


While the movie does advance the theme that the Algerians were given a raw deal, I came away thinking they were fools to have fought for a nation that had colonized their nation.  I suppose in reality some of these men would go on to join the Algerian freedom fighters after WWII.  This movie is not in the same league as “The Battle of Algiers”, but it does put that movie in some perspective.
Christmas present?  I think I'll regift this one to Caroline.
grade =  C-
Well, this completes my 12 Days of Christmas series.  Hope you enjoyed it.  Thanks to all who made some excellent comments.  There was some awesome feedback.  I am proud that I managed to accomplish what I set out to do.  I just wish the movies had been better.  At least they were entertaining.
Posted by War Movie Buff at 2:36 PM