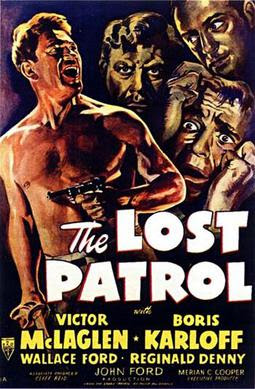 “The Lost Patrol” is a John Ford “who will survive in the outpost?” movie.  It is based on a novel entitled Patrol by Philip McDonald.  It was filmed in the Algodones Dunes of California.  The actors had to deal with 120 degree weather.  It was produced for $262,000 and made $583,000.  Did I mention it was made in 1934?  The movie was nominated for an Oscar for Musical Score by Max Steiner.  It is considered by some to be a minimalist masterpiece.  It is certainly minimalist in length at 73 minutes.


The movie opens with a twelve man patrol trudging through the Mesopotamian desert during the Great War.  This could be the sandiest movie in history.  Bang!  There goes the only officer and the only person with a clue as to where they are going and why.  Our first clue that this is going to be a minimalist plot is the fact that the men of the patrol seem to care not at all about their dead officer.  Perhaps he was a jerk.  The Sergeant (Victor McLaglan whose brother starred in the original silent version and who served in the Irish Fusiliers in that same area and time) takes command and leads the patrol to an oasis.  For the Western obsessed Ford, this will stand in for a fort and the lurking Arabs will be the Indians.  When they reach the oasis, they all refuse to jump in the water and splash around gleefully.  Just kidding.


This is a small unit dynamics movie.  The group is heterogeneous in an all-white sort of way.  With only 73 minutes available, we don’t get a lot of back-story on our crew.  Naturally one of them is a wolf who regales his mates with his conquests.  One is a naïve newbie.  One is a veteran father figure.  Obviously the Sergeant is gruff, but caring.  The one non-stock character is a Bible thumper named Sanders (Boris Karloff).  By the end of the film, Karloff has chewed all the bark off the palm trees.


They awake the next morning to find the newbie knifed to death and the horses gone.  Two down, ten to go.  The jovial guy climbs a palm tree and gets shot.  Dude, never climb a tree in a war movie!  They draw straws to see which two will go for help.  In the daylight.  Great plan, Sarge.  They return strapped to horses and mutilated.  Four down.  One of the survivors goes charging out for revenge – fail.  Five down.  Some more picking off by the amazingly proficient Arab snipers who never miss.  Three left.  Although we’re never told what the Arabs are upset about, we can assume they don’t like foreign occupiers drinking up their water.  Uncivilized bastards!
A biplane spots them and proceeds to land and the pilot jauntily hops out.  Bonus death!  Is this movie a comedy?  It is laughable in spots.  Good thing the plane came along because how else would the Sergeant get a machine gun.    As anyone who has seen any of the British Imperial action movies (e.g. “The Lives of a Bengal Lancer”) knows, machine guns are the best for mowing down pesky natives.  Also, a burning plane makes a good smoke signal.  By the way, they don’t bother to check on the pilot when they go out to the plane.  Screw him, damned flyboy.


Before the cavalry arrives, Sanders completes his arc to complete insanity and goes toodling off with a cross (get it?) for a walking stick.  Sometimes in movies like this you get the irony of the insane guy surviving.  Not this movie.  Two left.  For God knows what reason, Morelli goes to Sanders and gets – well, you know by now.  Twelve Arab bullets – twelve British dead.  (Oops – one of them was knifed.)  Is Ford going all in and closing bleakly (and realistically)?  Did I mention the movie was released in 1934 and needed to recoup its $262,000?  I know I mentioned the machine gun.


Finally we see the Arabs.  So does Sarge.  It’s payback time.  The Sergeant slaughters them while laughing hysterically (the only way to laugh when outnumbered) .  They are not getting (back) this watering hole!  The cavalry arrives.  Column rides off into the sunset – Western style.


I have read reviews that call this a masterpiece.  Wrong!  “Classic” is a little more appropriate because it is old, John Ford, and influenced the subgenre.  Frankly, it’s neither a masterpiece nor a classic.  It is just flat out a bad movie.  Much of it is ridiculous.  Most of the actions of the patrol make no military sense.  The Sergeant is supposed to be a great leader, but he actually is a doofus.  Climb that tree.  Go out into the desert in broad daylight to get help.  There is a hilarious scene where the Sergeant and Morelli guard the perimeter from the same spot.  Lucky for them the Arabs are too stupid to use maneuver or attack from several directions at once.


The movie is minimalist because it’s short and simplistic.  The acting is satisfactory except for the embarrassing performance by Karloff.   Someone must have told him he was in a silent movie.  The music is constant, but not bad in setting the mood.  It does not bludgeon you (like some of Steiner’s scores).  It is very Old School.  No blood or even bullet holes.


Relatively speaking, “The Lost Patrol” is not a bad movie.  But I am not reviewing based on the relative merits of war movies.  I am reviewing based on how good the movie is compared to all war movies, not just war movies from its era.  With that said, this movie is bad.  If it was remade with the same script, it would be laughed out of the theaters.  Crispin Glover could play Sanders.