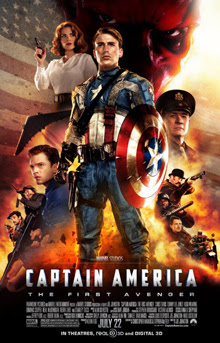 I am not a big superhero fan, but I do love war movies so why not review a hybrid.  “Captain America” is a superhero who is a soldier and was involved in fighting Germany in WWII.  The character was created in 1941 and helped the good guys win the war.  He then went on to fight in the Cold War.  Lately, he has been tasked to join the Avengers to fight modern villains.  “Captain America:  The First Avenger” is a movie that goes back to the character’s origins.


The movie has your typical superhero opening with the discovery of something mysterious.  The setting is Norway in 1942.   An evil Nazi named Schmidt finds something Norse.  The object which has enormous potential power is called the Tesseract.  Schmidt (Hugo Weaving) is the leader of Hydra which is the German weapons development organization.  Meanwhile, in America, a wimpy looking Steve Rogers (Chris Evans) dreams of joining the military, but he can’t pass the physical.  His genuine desire to serve his country and the fact that he is from Brooklyn catches the attention of a scientist who recruits him for a super-soldier project.  Rogers volunteers for injection of a serum which will convert him into an awesome physical specimen (like if Rambo and the Terminator had a baby).  The new and improved Rogers is manned up by the gruff, grizzled, growly Col. Phillips (Tommy Lee Jones).  He is chaperoned by the sexy British agent Peggy Carter (Hayley Atwell).  At first, he is used for propaganda purposes and to sell war bonds (and pin-ups for WACS), but you can bet he has a date with Schmidt (aka the Red Skull).  In the honored tradition of superhero movies (and all recent action movies in general), the villain is hissably despicable.  And that’s before he lifts his mask to reveal a red skull.  Schmidt considers Hitler to be a pussy.

Can you guess who the bad guy is?
Captain America arranges a meeting with the Red Skull and they negotiate an end to their differences.  Just kidding.  There is a big set piece where Cap infiltrates the Hydra factory to rescue a potential heterogeneous squad of he-men followers and his best friend (the world was smaller back then).  A raids montage follows which includes a fight with a German tank that apparently ate three Tiger tanks.  Cap goes medieval on the Nazis by using  a shield.  (Did they throw shields in the Middle Ages?)  We also get an Aston-Martin motorcycle ala James Bond.  There’s a Star Wars forest scene (without Ewoks, thankfully).  A train scene like you’ve never seen before.  Just kidding.  This all builds up to the climactic duel on a Hydra futuristic bomber (which was based on two actual Nazi designs – thank God the war ended early) complete with Japanese ohka-like suicide rockets.


I have to say that “Captain America” is not as ridiculous as most superhero movies.  The acting is fine and the cast is appealing.  Tommy Lee Jones is perfectly cast as himself.  He admitted that his character has been seen in thousands of war movies.  Chris Evans is studly and sturdy as the Captain.  Kudos to him for losing a tremendous amount of weight and allowing his muscles to atrophy so he could shoot the pre-serum scenes and then eating, weight-training, and steroiding his way to his Captain America self.  Just kidding.  It was Hollywood magic.  His hero is pure, but not diabetes-inducing.  However, if you are looking for Batman-like personal strife, forget it.  The Red Skull is an acceptable villain although he was more interesting before he pulled his mask off.  There is no character development of the squad, but why bother when they were going to be left in the 1940s?  The dialogue is surprisingly kind to your brain cells.


The problem is not with the characters.  It’s with the plot.  It is predictable and even throws in the best-friend-has-to-die-to-make-it-personal trope.  Not to mention the sexy, girl-with-a-gun (but perfect hair) love interest.  The plot is extremely unrealistic and takes a big chance by setting itself in a real historical event, but the futuristic weapons shoved into the 1940s are cool.  It is like they had to make this movie to get Captain America into the present so he could join the Avengers, but they could not avoid sending weapons back in time to appear in the movie.  The action scenes are typically busy and explosive. And ridiculous.  All of these scenes have been cribbed from other action flicks, but the target audience for superhero movies doesn’t seem to care about originality.  As usual, the ratio of deaths to wounded is extremely high, but this is true for standard war movies.  Also the inability of the bad guys to hit the broad side of a barn makes it very frustrating if you are rooting for them (which probably hurt the movies box office with Skinheads and Jihadists).


Overall, it is a fun variation of a war movie.  I can see it making my 100 Best War Movies list.  Just kidding.  Don’t get me wrong.  I am appreciative of what Captain America did to help the Allies win WWII, but I cannot condone drug abuse.