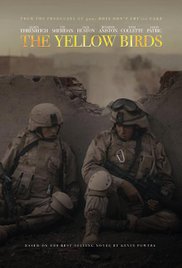 Almost every war movie that has come out of the wars with Iraq have involved PTSD.  “The Yellow Birds” is typical of the subgenre.  It is based on the novel by Kevin Powers.  Powers enlisted in the Army at age 17 and served in Iraq as a machine gunner.  The book is based on his experiences in the Army and when he returned home.  The Bartle character is based on him.  The book was critically acclaimed.  The movie was directed by Alexandre Moors.  It was originally supposed to star Benedict Cumberbatch and Will Poulter.  The film was shown at the Sundance Festival and was awarded the U.S. Dramatic Special Jury Award for Cinematography. However, the audience reaction caused the film to be reedited.  It had a very limited release.

The opening narration sets the theme.  “The war tried to kill us in the spring and the summer.  Tried to kill us every day, didn’t explain itself, didn’t tell us why it brought us there.  It just took.  It killed some of us before we knew we were dead.  Pretty soon it was hard to tell who was alive and who was a ghost.”  Murphy (Tye Sheridan) and Bartle (Alden Ehrenreich) meet in boot camp and become best friends.  We don’t even get a montage before the buddies are in the shit.  To build the case for PTSD, they are on a rooftop in an Iraqi city and Sergeant Stirling (Jack Huston) lights up a car that drives toward their position.  Collateral damage claims the lives of some civilians and we are supposed to feel Stirling is a combat junkie, but what else was he supposed to do?  Other scenes expand on the “I hate this place” vibe.  IEDs and ambushes.  Comrades die in your arms.  It turns out that Murph is not cut out for this.  He ends up going missing and the mystery has not been solved by the time Bartle returns to the states.  Before he left, he promised Mrs. Murphy (Jennifer Anniston!) to take care of her son.  This pressure and his experiences in Iraq turn him into a stereotypical homeless vet.  Mrs. Murphy wants to know what happened to her son and so does the Army.

“The Yellow Birds” is the rare war movie mystery.  This makes it different than your typical vet returns with problems movie.  The mystery is the only thing original about it, however.  The characters are cliché and the combat is what you visualize when you think Iraq.  It is also different in that it is nonlinear.  This works well.  The closest equivalent to this movie is “Courage Under Fire”.  Not equivalent cast-wise.  Bartle and Anniston are strong, but there is no Denzel Washington to be found.  The combat scenes are brief, but realistic for Iraq.  Unfortunately, the movie does not make a strong case for it being Hell.  Bartle and especially Murph come off as being fragile.  Since Powers was actually in the thick of it, I have to assume the movie’s structure did not allow time to really develop the reasons for Murph’s actions and Bartle’s reactions.
“The Yellow Birds” could have been much better, but it is a sincere effort and considering how few war movies are being made these days, it is worth a watch.