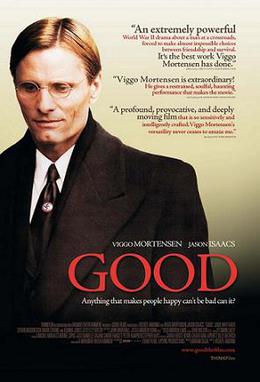 “Good” is based on the play of the same name by C.P. Taylor.  Note to movie-makers, you don’t have to keep the name of the play when you make a movie out of it.  The movie did poorly at the box office and some of that has to have been the terrible title. (I know someone will comment that there was a reason for the title, but come on!)   Producer Miriam Segal first saw the play when it premiered in 1981 and it took a while for her to put it on film.  Viggo Mortensen had also been impressed with the play as a young actor.

The movie opens in Berlin in 1937.  University literature professor John Halder (Mortensen) is called to the Reich Chancelllery to meet Reichsleiter Philipp Bouhler (Mark Strong).  The Nazis are impressed with Halder’s novel about euthanasia.  Bouhler wants Halder to write a paper justifying the “humane” practice of eliminating the mentally and physically disabled.  The movie flashes back to 1933 when Halder’s lecture on Proust is interrupted by a book burning incident.  Halder is disgusted and his best friend is a Jewish psychologist named Maurice (Jason Isaacs), but he is from that group of snobs who feel “Hitler is a joke, he’ll never last.”  But he does last to 1937 and now Halder’s future can benefit from association with non-intellectuals.  He not only joins the Nazi Party, but becomes the resident egghead of the SS department of implementing euthanasia.  Meanwhile, he gets an Aryan poster girl for a mistress.  Anne (Jodie Whittaker) seduces her professor and then becomes a Nazi trophy wife.  Will Halder trade Proust for Faust?

“Good” reminds of a Masterpiece Theater production.  It is low budget, but sincere. The cast is good and Mortensen is fine as Halder.  Surprisingly, he plays Halder more as a wimp than a tortured soul.  Jason Isaacs is better as Maurice.  His transition from a caddish Freud to Jewish everyman is more compelling than Halder’s story.  Unfortunately, the movie is rife with clichés to go along with the stereotypes.  It is best enjoyed as an introduction to the Holocaust subgenre of war movies.  If you have seen a number of Holocaust movies, you’ve seen this one.  Halder is the anti-Nazi intellectual who is corrupted by contact with his lessers.  He has to turn his back on his conscience, represented by his Jewish friend.  He fools himself into believing his promotion and placement in the in-crowd is a strategic ploy to improve the abhorrent by infiltrating their clique.  How does that usually work in cinema?  You’ve also seen Anne before.  She’s the seductive student who feels sex will trump the professor’s stodgy conscience.  The climax (sorry) of this theme is an egregious scene where the sight of Halder in his black SS uniform has her literally on her knees.  This is the moment where the movie jumps the skull.  When the little head gets big, the big head forgets its principles.

The biggest weakness of the movie is it is tone deaf.  The SS are portrayed as frat boys who run the campus.  They don’t have to wait in lines for railway tickets!  Halder is the nerd who is recruited to raise the GPA of the fraternity and write their essays.  He marries a sorority sister who wants to attend all the cool parties.  He abandons his old friends and relatives.  That is about how deep it is.  The movie floats the idea that it will delve into the euthanasia program, but then drops it.  Halder’s mother represents the potential victims.  But there is little about Halder justifying the program and then having to see the consequences.  By 2008, wouldn’t it have been a good idea to go off the beaten path and concentrate on the euthanasia program?  Maurice stands in for the Holocaust and although that theme is pursued, it is scarcely ground-breaking.  The movie concludes with a scene is meant to be the big payoff, and it is, if this is your first Holocaust movie.

HISTORICAL ACCURACY:  The movie does not even claim to be “inspired by a true story”,  but there is some relation to the truth.  Halder reminds of Martin Heidegger.  Heidegger was a famous German philosopher who taught at Freiburg University.  He was elected rector in 1933 and not coincidentally joined the Nazi Party that same year.  He envisioned that he would become the resident philosopher, but he was given a limited role and was ridiculed by many in the Party.  He soon realized that compromising his principles had been a mistake and resigned his position, but he remained in the Party.  Interestingly, he had affairs with two students and one was Hannah Arendt.  Bouhler is an actual historical figure.  He was the Reichsleiter in charge of the Aktion T4 euthanasia program that was responsible for the murder of at least 70,000 handicapped and mentally disabled adults and children.  He also was in charge of vetting literature to ensure it met Nazi “standards”.  He was captured after the war, but committed suicide before the inevitable execution.  The movie includes a reference to the assassination of a Nazi diplomat in Paris by a Jewish man.  This was the excuse for Kristallnacht which is depicted in the movie as the last straw for Maurice.  As far as the song that the movie clumsily uses to imply Halder’s stress, it is called “Die zwei blauen Augen” (“The Two Blue Eyes”).