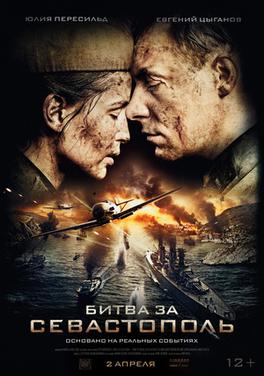 “Battle for Sevastopol”  is a Russian/Ukrainian movie set on the Eastern Front in WWII.  It was directed by Sergei Mokritskiy. Despite the title, it is a biopic of the famous Soviet female sniper Lyudmila Pavlichenko.  It focuses on her involvement in the sieges of Odess and Sevastopol and her visit to America and meeting with Eleanor Roosevelt.   It was a hit in Russia and critically acclaimed.  It was nominated for Nika Awards (equivalent to the American Academy Awards) for Best Film and Best Actress (Yulia Pereslid).  It won Golden Eagle Awards (similar to the Golden Globes) for Actress (Pereslid) and Cinematography.  It was nominated for Best Film, Director, Actor (Evgeniy Tsyganov), Art Direction, Costume Design, and Music.

The movie ends any suspense of whether Pavlichenko survived the war by starting with Eleanor’s visiting her in Moscow in 1957.  It then flashes back to their meeting in the White House in 1942.  At that time, she was credited with 309 kills.  Okay, let’s get this party started.  In 1937, Pavlichenko is at university, but she scores very well at the rifle range.  She’s a natural sniper and is recruited for the army.  She ends up in Odessa when it was surrounded by the Germans.  She is paired with a veteran sniper named Makarov.  His death is going to turn her into a killing machine.  In Odessa, and then in Sevastopol, she keeps running into two of her university mates.  Masha is a nurse and Boris is a doctor.  She gets another male partner named Leonid (Tsyganov).  The sniping is intercut with the romancing.  Throw in the obligatory duel with an ace German sniper.

You may be surprised to learn that “Battle for Sevastopol” is in a nonlinear format.  This was a daring decision for a movie that has a standard plot.  It is the only aspect of the movie that stands out.  The acting is average, although you can’t fault Pereslid for playing Pavlichenko as unemotional.  It went with the job.  She is supposed to be a female in a man’s world, but she still falls in love and wants a child.  This fits the theme of can a woman soldier maintain her femininity and yet keep the respect of her male comrades.  When she visits America, she tries wearing a skirt, only to be called out by her Soviet propaganda handler.  Meanwhile, she is asked by the American press whether she wears make-up in combat.  The Soviet press calls her “Lady Death” and the Americans dub her “Miss Pavlichenko”.  Either one of those would have been a better title than the one chosen.

The movie does have some combat of the modern variety.  There is slo-mo, sensory deprivation, graphic wounds, and bullet-eye views.  The CGI is decent.  Oddly, there is not a lot of sniping and the movie does not make a strong case for her being a great sniper.  Much of the occurrences in the movie smack of historical enhancement.  The Masha and Boris characters are stock and unconvincing.  Their appearances indicate it was a small world on the Eastern Front.  The interludes with Eleanor don’t ring true.  However, the movie is fairly accurate.  Several of the main characters appear to be fictional (like Misha and Boris), but the basics of the movie are close enough to the real story to make the movie a good biopic on the most successful female sniper in history.  Just don’t watch it if you want to watch a combat movie about the Battle of Sevastopol.

`              In conclusion, “Battle of Sevastopol” is not in the league with the black and white Soviet war movies, but it is better than most of the modern Russian war movies like “Stalingad (2013)” (2013), “White Tiger”, and “Attack on Leningrad”.  It’s entertaining and its intriguing structure covers up some trite plotting.

HISTORICAL ACCURACY:  Pavlichenko was attending the Kyiv University when Germany invaded the USSR.  She was in the fourth year of her major in history.  She had proved herself to be an excellent sharpshooter, but when she enlisted she was put in the nursing program.  She begged and pleaded to become a sniper and got her wish.  She became one of hundreds of female snipers.  Her first kills were two Rumanian soldiers which she referred to as her “baptism of fire”.  This occurred before her unit was posted to Odessa.  She is credited with killing 187 during the siege.  It was at Odessa that she married a sniper who was subsequently killed.  (She had an earlier failed marriage pre-war which had resulted in a child.)  When Odessa fell, she and her unit went to Sevastopol where she was mainly a trainer.  The duel with the German sniper is surely Soviet propaganda at best, cinema fiction at worst.  She was wounded by shrapnel from a mortar at Sevastopol and was ordered to evacuate by submarine.  She would not have needed help from Misha and Boris.  She was a valuable propaganda asset.  And after recovering from her wound, she was sent off to America, Canada, and Great Britain.  She was the first Soviet citizen to go to the White House.  Her relationship with Eleanor and the American press was accurate.  Woody Guthrie did write a song about her.  When she returned to her homeland, she was strictly a trainer.  Her record of 309 kills stayed.  After the war, she became a historian but suffered from PTSD and alcoholism.  She was visited by Eleanor Roosevelt in 1957.