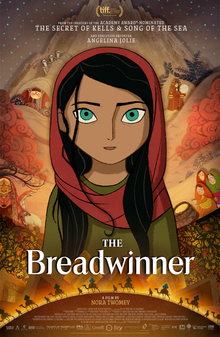 If you have been following the recent events in Afghanistan, you may have heard that people are concerned that history will repeat itself.  The people most concerned with this are Afghani women.  If you are wondering what they are worried will repeat itself, you might want to watch “The Breadwinner”.  It was a Canadian, Ireland, and Luxembourg production, which proves not just the U.S. was interested in Afghanistan.  The movie is an animation drama directed by Nora Twomey.  She is an Irish animator who co-directed the Oscar-nominated “The Book of Kells”.  This film was also nominated for Best Animated Feature.  Angelina Jolie was a co-executive producer.  It is based on the best-selling young adult novel.

Parvana (Saara Chaudry) is an eleven-year old girl who lives in Kabul after the Soviets have been driven out and the Taliban has taken over.  Her father lost a leg in the Soviet-Afghanistan War and has trouble providing for his family.  He tells his children that Afghanistan was once great before it became the battleground for empires, starting with Cyrus the Great.  He ends up being sent to prison by an ex-student named Idrees who is now in the Taliban.  The same little shit wants to marry Parvana.  Parvana must step up and become the breadwinner of the family, but since women could not sell goods in the street, she has to cut her hair and disguise herself as a boy.  It was bad enough that she was having to sacrifice her childhood to marry a wifebeater, but instead she has to step into adulthood as the other gender.

This is a unique movie, and not just because of the subject matter.  Twomey, early in her animation career, decided that animation was not just for children’s tales.  “The Breadwinner” is a good example of recent animated films (like “Persepolis”) that are aimed at adults.  So that’s not the unique part.  Interwoven into Parvana’s arc is her father telling a traditional Afghani tale about a little boy who must defeat the Elephant King to retrieve some magic seeds.  (If you don’t think your kids are ready for the seriousness of Parvana’s story, fast forward to just the Elephant King story parts.)  This tale is animated in a different style than the rest of the movie, but the transitions are great.  Both stories are fascinating and the animation for each is mesmerizing.  We need more animated war movies.  They are a good alternative to excessive CGI.

The movie has three great characters.  Parvana is a plucky girl heroine/hero.  She befriends an elderly Afghani named Razaq who represents the pre-Taliban male mentality, which was anti-female, but not medieval.  In contrast with his relatively enlightened attitude, Idrees represents how much worse a patriarchy can get.  He is one of the most loathsome war movie characters that I have encountered.  It is chilling to realize he would be a mullah today.

The book came out in 2000, which means it predated the American invasion of Afghanistan.  The Taliban was firmly entrenched and had no inkling that their guest Osama Bin Laden would cause their world to be rocked the next year.  The screenwriters Deborah Ellis and Anita Doron deftly added an ending that foreshadows the American takeover.  The movie ends with the future of Parvana unclear as the American intervention begins.  Moviegoers would have known that her future was relatively bright with the fall of the Taliban.  Watching the movie now makes it clear that the future of her female children will probably be like her early years.  Besides that adjusted ending, Ellis and Doron made other changes that improved the story, in my opinion.  I have not read the book yet, but apparently they added the characters of Razaq and Idrees.  That was brilliant.  I am very curious if they also added the folk tale.

If you don’t care what happened in Afghanistan, watch this movie.  I’m not arguing we should have stayed.  I’m just saying to spare some time to empathize for the women of Afghanistan.  Not all of them will be able to disguise themselves as men.

Email ThisBlogThis!Share to TwitterShare to FacebookShare to Pinterest
Labels: Afghanistan, The Breadwinner