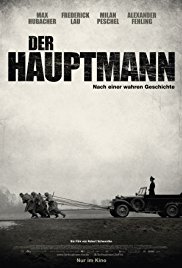 “The Captain” (“Der Hauptmann) is a German/French/Polish movie in the German language.  It was directed and written by Robert Schwentke.  It is the tale of a German soldier named Willi Herold who took advantage of the chaos of the closing months of the war to carve his own little niche in the Holocaust.

The movie opens in Germany in April, 1945.  Willi Herold (Max Hubacher) is a deserter.  He manages to escape from military police.  He comes upon the uniform of a German captain and takes on the guise.  As he moves along, he accumulates a motley crew of other deserters and proclaims them Kampfgruppe Herold.  They reach a camp full of deserters and Herold uses his rank to take over the camp.  He continues his descent into megalomania, but in a Germany ruled by megalomaniacs, he gets away with murder.  Literally.

“The Captain” starts out making you wonder who this German version of Sad Sack is.  It stays interesting throughout as we learn just how far a Sad Sack with power and status will go.  The movie reminded me of that famous experiment where they got regular people to give more and more powerful shocks to test subjects.  However, in this case, it is apparent that Herold was not just a regular Josef corrupted by power.  He clearly was warped and the situation brought his demons out.  The movie answers the question:  what happens when you give power to a sociopath?   And his evil attracts others who have demons.  He is not the anti-hero you see in some modern war movies.  Hubacher is outstanding as the amoral Herold.  The rest of the cast is good.  There are several meaty roles.  Herold attracts a motley crew and his main henchman is a psychotic drunkard named Kipinski (Frederick Lau).  He’s a psycho and Herold is a sadist.  And yet, they don’t really stand out in Nazi Germany towards the end.  One theme is that the more brazen you are, the more you can get away with.  What Herold gets away with are war crimes.  Appropriate to the mood, the film is in crisp black and white.  For that reason and because of the take no prisoners plot, the movie is not for everyone.  After all the terrible, head-shaking things Herod gets away with, the audience doesn’t get closure except through a footnote.  But it’s not a movie that promises closure.  It is a movie that firmly fits in the anti-war vein by showing the lower level of the Nazi pyramid of evil.

HISTORICAL ACCURACY:   The most amazing thing about the movie is it is very accurate.  What appears to be a screenplay invented to show that power corrupts, is actually a near documentary about Willi Herold.  Willi was born poor.  He was kicked out of the Hitler Youth for refusing to participate.  However, in 1943, he was drafted at age 18.  He proved to be a good soldier.  He was awarded the Iron Cross for taking out two tanks at Salerno.  When his unit got relocated to Germany in 1945, he got separated from his unit.  It is unclear whether he was a deserter.  He ran into an abandoned car and found a captain’s uniform in it.  On April 11, he entered an Emslandlager camp which held deserters.  Herold claimed he was under direct orders from Hitler and the camp commandant fell for it.  In the next eight days, Herold and his gang executed 90 prisoners for various infractions.  An air raid ended his reign of terror as most of the inmates escaped.  He and his cronies hit the road and continued their depredations.  Finally, he was arrested by German authorities and was convicted of his crimes after confessing.  He was subsequently released by mistake.  He returned to his home town, but was arrested for stealing a loaf of bread.  Upon examining his record, he was discovered to be a war criminal and turned over to the British.  He and some of his men were forced to exhume 125b bodies at the Emslandlager camp.  He was convicted of 125 murders and executed via guillotine in 1946.  By this time he was known as the “Executioner of Emsland”.

Email ThisBlogThis!Share to TwitterShare to FacebookShare to Pinterest
Labels: The Captain (2017)