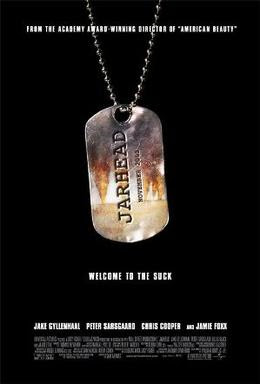 ACTING: Both movies have fine casts and are well acted. Jake Gyllenhaal as Anthony Swofford does a good job portraying a Marine sniper who is tested mentally and physically by the stress of waiting for combat and then combat itself. Gerard Butler as King Leonidas gives a powerful performance and captures the arrogance of a Spartan king. The supporting casts are strong in both movies. 300 includes a break-out performance by Lena Hedey as Leonidas’ wife. Jarhead has the ever reliable Jamie Foxx as the gruff sergeant. I give a slight edge to 300.

REALISM: Jarhead is based on an acclaimed memoir. If we assume Swofford was telling the truth, then the movie should be pretty realistic. However, the book and movie have been criticized for being melodramatic and over the top in its depiction of the behavior of young Marines. It seems unlikely all the wild incidents could have happened to the same platoon. Swofford almost killing a fellow soldier is an example. However, the movie deserves credit for portraying war as a lot of waiting and not a lot of combat. The attitudes of the Marines seem authentic. 300 is not supposed to be realistic. It is true to the spirit of the graphic novel by Frank Miller. Given that qualification, it is surprisingly close to the real story in several areas – Spartan training, weapons and tactics, and attitudes. Under the circumstances it is fair to give it a default 6.

ACCURACY: It is hard to judge the accuracy of Jarhead. We have to rely on Swofford’s word for some of it. Some of the incidents seem exaggerated at the least. The crucial scene where he is denied his opportunity to get a kill is changed in the movie for dramatic effect. The Highway of Death scene is highly unlikely. On the other hand, 300 is based around the Battle of Thermopylae, but is not meant to be a history lesson. It is surprisingly accurate for a movie that is so extravagant. The basics of the battle are there. Several of the main characters are based on real people. If you throw out the fantastic elements and the subplot of government treachery, it is acceptable as history.

ENTERTAINMENT VALUE: Jarhead suffers from lack of action. The accurate depiction of how most soldiers do not get to kill in combat is admirable, but ultimately unfulfilling. Swofford’s descent into mental breakdown because of his obsession with his girlfriend’s infidelity is not really believable. Several members of the unit show stress related disorders when in fact they had not been through anything particularly harsh. 300 was a revolutionary movie. Nothing like it had been seen before, at least in a war movie. The visuals are stunning and the combat scenes are mesmerizing. The fact that this cinema eye candy was structured around a true story and had strong acting to go with the effects make it a special movie.