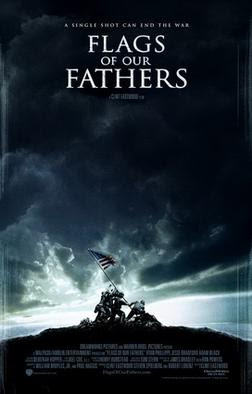 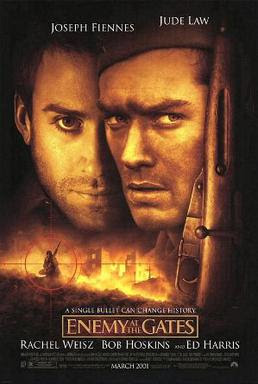 ACTING: “Flags” does not have an A-List cast. The main characters: Ryan Phillippe as James Bradley, Jesse Bradford as Rene Gragnon, and Adam Beach as Ira Hayes, are very good. Director Clint Eastwood made an excellent decision to not load the story down with famous stars. Beach is especially poignant in portraying the troubled Hayes. “Enemy” has showier leads. Jude Law as Vasily Zaitsev and Joseph Fiennes as Danilov are fine with Danilov being less believable. Bob Hoskins brings the proper bombast to the role of Nikita Khrushchev. Rachel Weisz as female sniper Tanya is too well-coiffed and beautiful for the role. She also makes no attempt at a Russian accent. Ed Harris steals the acting honors with the coldly efficient and malevolent Major Konig.

REALISM: “Flags” attempts to authentically depict the terrors of combat in the Pacific and the media circus on the home front that confronted the flag-raising heroes. The combat has the feel of “Saving Private Ryan” and is appropriately chaotic, explosive, and graphic. The fighting is vicious and sometimes hand-to-hand with bayonets. The bond drive on the home front is a mixture of cynicism and ultrapatriotism. It’s laid on a bit thick, but not in a ridiculous way. “Enemy” has chosen to set a love triangle in the middle of the greatest battle of WWII. It’s small world approach to the character’s encounters defies credulity. The city of Stalingrad, while appropriately a shambles, appears to be empty save for the maneuverings of the featured characters. It also relies on some amazing pieces of luck to advance the two main foes to their final confrontation.

ACCURACY: “Flags” is based on the book by James Bradley and Ron Powers. The movie takes few liberties with the narrative. It is about as accurate as you can find. I could find no major flaws in it. The landing is true in its depiction of the Japanese allowing the Marines to come inland a bit before opening fire. Marine tactics are true to their style. The deaths of the three flag-raisers who did not survive are accurate. Even the small touches like Harlon Black’s mother recognizing his butt in the picture are true. “Enemy” has numerous problems with historical accuracy. The movie was inspired by a small portion of William Craig’s study of the battle. Craig added the legendary duel between Zaitsev and Konig to his story basing it on Soviet records which obviously were subject to communist propaganda. The movie takes this already dubious legend and ramps it up to a love triangle/snipers duel. I was surprised to find that there actually was a Sacha who was a double agent and was hanged by the Germans (of course not in the way depicted). I was stunned to find that there was a female sniper named Tanya and she apparently had a relationship with Zaitsev (although even the Soviet historians did not go as far as having them live happily ever after as the movie implies). Generally speaking, the movie does a poor job as a tutorial on the Battle of Stalingrad. You get no idea what the big picture is. It also goes overboard in showing Russian soldiers being forced to make suicide attacks.

ENTERTAINMENT VALUE: “Flags” is an excellent blend of exciting action and character development. It manages to tell the story of the flag-raising while also giving a clear picture of what Iwo Jima was like and what the home front in 1945 was like. Eastwood examines the question: what is a hero? He indicts the government’s manipulation of heroes for morale-boosting and fund-raising purposes. He does not glamorize war and shows the randomness of death on the battlefield. The most respected soldier (Make Strank) is killed by friendly fire. The movie also explores post traumatic stress disorder through the tragedy of Hayes. Its nonlinear structure is effective. “Enemy” is stronger as pure entertainment. It is obvious the producers sacrificed accuracy for entertainment. The set pieces are well done. It has a strong female character. (There is a very erotic scene that has no nudity in it.) It has some very suspenseful cat and mouse scenes. It concentrates on snipers – the coolest of the cool. The soundtrack by James Horner fits the scenes perfectly. Unlike “Flags”, it is not trying to enlighten its audience. It is fun in a cliché-ridden, good guy wins, sort of way.

Email ThisBlogThis!Share to TwitterShare to FacebookShare to Pinterest
Labels: Enemy at the Gates, Flags of Our Fathers, Letters from Iwo Jima, March Madness, Stalingrad