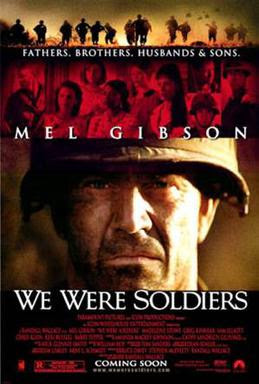 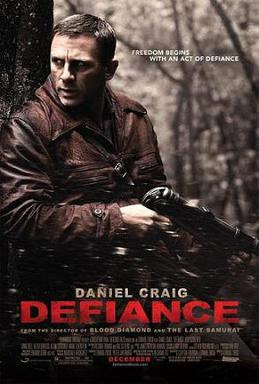 ACTING: “Defiance” is anchored by Daniel Craig (Tuvia Bielski) and Leiv Schreiber (Zus Bielski). Both are powerful and handle the conflicting philosophies and personalities of their characters well. The supporting cast is also fine. “We Were Soldiers” is dominated by Mel Gibson as Col. Harold Moore. He does his best John Wayne impression. The supporting cast is equally sincere. Madeline Stowe as Mrs. Moore and Greg Kinnear as Bruce Crandall are outstanding. “Defiance” is a little less hammy.

REALISM: “Defiance” tries to convey the hardships of Belorussian Jews as they hide in the forests. It undoubtedly was rougher than the movie conveys. At one point, Zus is badly wounded in an attack on a police station, but shows little ill effects. The defeat of a German unit that includes a tank is certainly very unrealistic. “We Were Soldiers” has been mentioned as one of the most authentic Vietnam War movies. The combat is properly intense and chaotic. Death comes randomly. Americans die in horrible ways.

ACCURACY: “Defiance” is based on a true story of the Bielski brother s and their Jewish charges who hid in the forests of Belorussia during WWII. Their arrangement with Russian partisans is accurate, but the big battle at the end is fictional. The brothers, especially Tuvia, are portrayed as more saintly than they actually were. Sources say they had their pick of the women, for instance. “We Were Soldiers” is based on a best seller by Moore and war correspondent Joseph Galloway (Barry Pepper). They both approved of the way the book was brought to screen. Although much of the combat seems Hollywoodized, up until the end the battle is actually very accurately depicted. Most of the key incidents did occur. The movie is marred by a ridiculous bayonet charge and gunship assault that was nowhere near the truth. Just feel-good bull shit to have a happy ending.

ENTERTAINMENT VALUE - Both movies are very entertaining. The conflict between the Bielski brothers and the alternation between Tuvia trying to hold together his hodgepodge of civilians and Zus kicking ass with the partisans is interesting. The final battle scenes are intense and well done, if inaccurate. “We Were Soldiers” is a bit hokey and even is overtly religious, but it makes up for it with some great combat scenes. It also has some laugh-inducing clichés including the old soldier looks at the picture of his girl before going into combat (partly alleviated because he’s an enemy soldier) and then dies. The home front scenes of the wives receiving telegrams is powerful. It also deserves a lot of credit for humanizing the enemy.