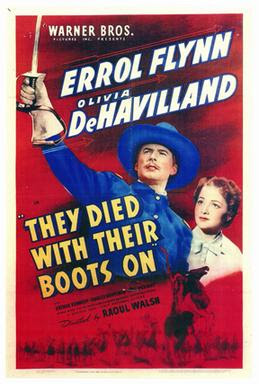 BACK-STORY: “They Died With Their Boots On” is an old school war movie from 1941. It was directed by Raoul Walsh and was the eighth and last screen pairing of Errol Flynn and Olivia de Havilland. It was a huge box office hit. Two stunt men were killed in the filming of charges. One impaled himself on his sword as he fell from his horse.


NOTE: Because of the nature of the film, I have decided to intersperse comments on realism and accuracy throughout the summary rather than wait for the accuracy section.

OPENING: Custer (Flynn) arrives at West Point in 1857 dressed as a European Hussar and leading a pack of dogs. (Custer was poor and would not have looked like a rich boy when he arrived.) He is arrogant and has a prank pulled on him by an upperclassman named Sharp (Arthur Kennedy). After punching Sharp at parade, he is brought before Superintendent Sheridan (He was never Superintendent of West Point.) Sheridan recognizes something special in the plebe and becomes a guardian angel for him. This is useful because a montage highlights some of Custer’s demerits. (Ironically, most of the demerits were for pranks.)


SUMMARY: The Civil War breaks out and Custer graduates ahead of schedule despite poor academics. Before he leaves, he meets the niece of Sheridan, Elizabeth Bacon (There was no relationship between the two and they did not meet at West Point.) Their romance gets off to a rocky start which is 1940s Hollywood’s way of foreshadowing their marriage.

A chance meeting with Gen. Winfield Scott gets Custer appointment to a cavalry regiment in time for First Bull Run. (Custer’s assignment was normal and did not involve Scott.) Guess who is in command of the regiment – Sharp. Surprise! Custer disobeys Sharp’s orders and leads a charge which gets him wounded and decorated. (Custer did perform bravely, but as a messenger. He did not lead a charge. He did not get a medal and the medal shown in the movie was not created until 42 years later.)

On leave Custer hears “Garry Owen” for the first time in a saloon and takes a liking to the tune. He insults a gentleman that turns out to be Elizabeth’s pompous father. Later, Bacon throws him out of the house during a visit with Libby. (Mr. Bacon disliked Custer because he was from the lower class.) Custer returns and proposes. They agree to marry when he becomes a general. He’s romantic and ambitious!


Custer is accidentally promoted from Lieutenant to Brigadier General right before Gettysburg. (The promotion was for gallantry, not accidental. It was from Captain to General.) During the battle he saves the Union flank by leading his regiment against JEB Stuart. No Rebels appear in this scene. We just see Custer leading three charges. It is like watching a tennis match with one player.

After the war, Custer returns home and gets married that same day with the approval of Mr. Bacon, now the father-in-law of a hero. Unfortunately, the boredom of civilian life causes Custer to become an alcoholic. (Custer actually did not smoke or drink.) Libby visits Gen. Scott and pleads with him to give her husband a western command. Scott promotes Custer over numerous senior officers because “the nation owes him.” (Scott was no longer in command and had nothing to do with the promotion.)

On the trip to Fort Lincoln, Custer fights a duel with Crazy Horse (“Chief of the Sioux”) and takes him captive. (Do I have to point out this is bull shit?) At the fort, Custer finds his command to be a mess. Surprise! This is due to the post bar run by guess who? Sharp! By the way, Sharp is also openly selling repeating rifles to the Indians. (I am not making this up.) Not to worry, Custer shuts down the bar and teaches the men “Garry Owen” which instills discipline in the unit. Suddenly, the 7th Cavalry is worthy of their great leader.


Custer goes to Washington to rat out the corrupt Sharp and his cronies who are abusing Indian rights. He is being threatened with court-martial for insubordination, but barges into Pres. Grant’s office and demands reinstatement to his regiment. Of course, Grant agrees. (Custer got in trouble with Grant for testifying about scandals in the Indian bureau which involved Grant’s brother. Grant reluctantly reinstated Custer at the last moment because of prodding from Sheridan and others, not because of a meeting with Custer.)

Custer can now participate in a campaign against the Indians with the hope of giving them justice. (I am not making this up!) They depart the fort with schmaltzy romantic music swelling and Libby fainting. Guess who he brings along to get redemption? Sharp! Custer to the greedy Sharp: “You can take glory[not money] with you when it’s your time to go.” On the march, Indian scouts spy on them. (The Indians had no idea Custer was coming.) When an old coot reports that Gen. Crook’s unit has been wiped out, Custer realizes that he must sacrifice the 7th Cavalry to prevent the same thing from happening to the main force led by Gen. Terry. (Custer did not know of Crook’s defeat, which was not a wipe-out. He did not think he would lose. He attacked, not to save Terry, but to get the glory before Terry could arrive.)

Approaching the Indian village, Custer is ambushed by the Indians. (Custer was attempting to ambush a sleeping village and kicked a hornet’s nest instead.) In an epic scene, the soldiers fight on foot against a swarm of Indians (most wearing war bonnets). The music alternates between Indian and cavalry themes. There are the typical bloodless deaths, including the ever popular being-dragged-by-the-stirrups. Some of the troopers have swords. (No one, including Custer, had sabers at the battle.  Oh by the way, Custer had shorn his famous golden locks before the campaign.) Custer is the last white standing, naturally. He is shot by Crazy Horse in a moment of poetic justice. (Custer most likely was killed early in the battle. He was almost positively not the last to die. The chances of Crazy Horse firing the kill shot is approximately one in however number of Indians were participating.)


CLOSING SCENE: Libby Custer visits Gen. Sheridan. She brings Custer’s last letter, which because it has his dying words is considered to be unassailable and admissible in a court of law. He indicts the corrupt railroad company and pleads for fair treatment of the Indians. Sheridan promises to carry out Custer’s dying wishes and guarantees that Crazy Horse can keep the Black Hills. (This is the same Sheridan who famously said “The only good Indian is a dead Indian.” As we all know, Custer’s death was the turning point in treatment of the Indians. They lived happily ever after. I think they still own the Black Hills.)

WOULD CHICKS DIG IT? What woman can resist Errol Flynn? The movie has a strong romance in it. The action is sanitized. There is definite chemistry between the two leads. It is not a hard core war movie and was obviously very popular with ladies.

ACCURACY:  I have already pointed out the numerous inaccuracies, but let me point out a few accuracies. Custer was a glory hound. He would fit in perfectly in our current celebrity-obsessed culture. He was a poor student and did accumulate a record number of demerits at West Point. He did have influential patrons throughout his career. His marriage to Elizabeth Bacon was one for the story books. He once went AWOL, abandoning his unit, to rush to her side. He did fight Stuart at Gettysburg. He was killed at the Little Big Horn. That’s about it.

CRITIQUE: “They Died With Their Boots On” is a classic example of entertainment trumping historical accuracy. The movie scored well with critics and has an 80% rating on Rotten Tomatoes. Several reputable war movie critics gave it positive reviews. The movie is undeniably entertaining in a 1940s sort of way. It has something for everyone. The romance, the action, the humor, the pompous score,… Flynn and de Havilland. Kudos for the sympathetic, if patronizing, treatment of Native Americans. It is no surprise it was a big hit. What is surprising is that supposed fans of history can overlook the raping of history that occurs in this film. Specifically, how could the editors of Military History magazine place this movie in the Greatest 100, much less at #68?!

More books have been written about the Battle of Little Big Horn than probably any other battle in American History and yet most Americans probably have a view of the battle and of Custer similar to what is depicted in this movie. And without a doubt many of the generation that grew up with this movie probably viewed it as an accurate retelling of the story. It is bad enough for Americans to learn their history from Hollywood screenwriters, it is inexcusable for people who know history to abet this. The movie should have been crucified by historians. Instead, many of them took the approach that while it is inaccurate, it sure is entertaining. Shame on them.

CONCLUSION: TDWTBO is to old school war movies what “Braveheart” is to modern war movies. Both films are terrible trashings of history. I would have to say TDWTBO is the worst of the two because it brazenly twists a well-chronicled event and person. At least with “Braveheart”, hardly anyone knew about William Wallace and many people were encouraged to find out the truth about him because of the film. He certainly was a positive personality so Gibson’s portrayal was realistic. Wallace really was a hero. Although the two battles in that movie are laughably inaccurate, they were not well known. On the other hand, Custer as portrayed by Flynn is a dashing hero, when in reality he was an egotistical jerk who was an incompetent Indian fighter. He deserved to die, but his men did not. To suggest that he was a friend of the Indians and that his death resulted in better treatment of them is beyond contempt. The simplistic depiction of one of the most famous battles in American History and its aftermath is a disservice to history and to its audience.

As a defender of the integrity of history as depicted in war movies, I refuse to back down in my view that movies like “They Died With Their Boots On” and “Braveheart” are pitiful movies no matter their supposed entertainment value for the ignorant masses.