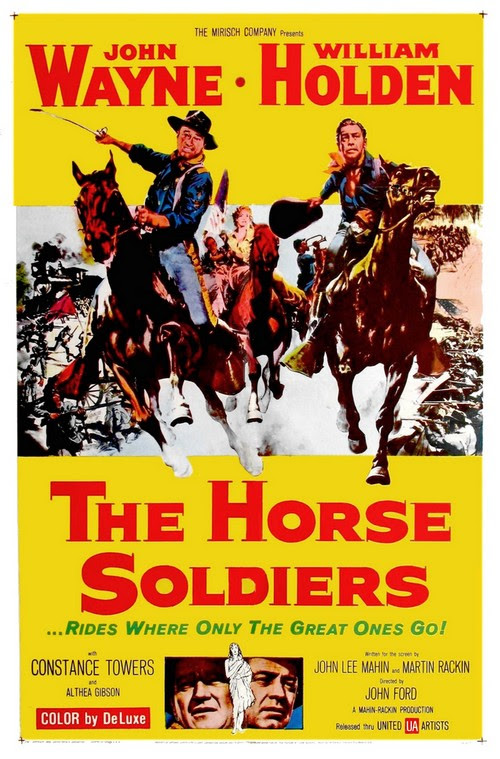 This will be my first foray into reviewing a book and its companion movie. Recently I read “The Horse Soldiers” by Harold Sinclair and then watched the old John Ford / John Wayne movie of the same name. Not surprisingly, the movie differed substantially from its source novel. Some war movies actually improve on their books. Is “The Horse Soldiers” one of them? Is the book an accurate and entertaining retelling of a true story?


Sinclair retells the story of one of the most celebrated cavalry raids in American History. Grierson’s Raid took place during the Civil War in 1863. It was part of Grant’s Vicksburg Campaign. Col. Benjamin Grierson penetrated 300 miles into enemy territory to destroy a key rail station and generally cause distractions to support Grant’s siege of Vicksburg. He then continued on another 300 miles to reach safety in Baton Rouge.

The book starts with Grierson (called Marlowe in the book) being briefed by a Gen. Hurlbut about the mission. We learn quickly that Marlowe is cynical and speaks his mind even to superiors. He openly questions Hurlbut’s suggested return route and it is obvious that he has contempt for the “desk-bound army”. It is also clear that Marlowe is going to do whatever he thinks is right once his command is on its own. Sinclair knows how the military works. Throughout the book he has insightful observations like: “A corps commander’s judgment is, according to the book, presumed to be sound because of what he is, not what the judgment is.” Marlowe accepts the assignment stoically, but we know it is going to be very risky.

Marlowe dominates the book, but Sinclair develops several interesting characters. Mostly he concentrates on the officers – Secord, Bryce, and Gray. The novel is a good study of leadership traits – strengths and weaknesses. Marlowe is given the back-story of losing his wife to medical incompetence. He drinks too much, but has it under control. He is a typical civilian drawn into the war who makes the best of it and shows great aptitude for command. Sinclair: “For most men… the war was an interruption of their normal lives, something for which they momentarily turned aside, as though to put out a fire in the house of a neighbor.”

Marlowe’s first big decision is to send back one of his three regiments on a circuitous route to confuse the enemy pursuit. Col. Blaney is unhappy with the order, but Marlowe is not to be dissuaded. The good of the many come before the safety of some is his philosophy. Blaney runs into a Rebel unit blocking his path. Sinclair digresses to put us in the boots of the Rebel commander Col. Barteau. This is an interesting view, but Sinclair largely abandons the approach for the rest of the book. Blaney charges through the block and on to safety in a scene lacking much combat. This trend continues throughout the book as Sinclair concentrates on command decisions and the mundane facets of a raid. This is realistic, but leaves the action-lover a little bored.

Marlowe has to make another tough decision when he sends his most trusted officer (Capt. Bryce) on a side raid to further distract the enemy. Neither man expects to see the other again. Sinclair on this paradox of war: “Those who can least be spared must be offered to preserve the less deserving”. Marlowe keeps the incompetent Maj. Gray with him.

The attack on the rail station at Newton is a bit anticlimactic. The small force of Confederates happen to be in the town are easily disposed of. The destruction of the rail facilities and trains are interesting, especially a vignette about the blowing up of a moving train. The big plot development is Marlowe putting Doctor Keller under arrest for neglecting the wounded to help with the problem birth of a Southern woman. Marlowe forces Keller at gunpoint to abandon the birthing, leaving us to wonder if the mother and child survived. The reader is left to ponder who is right in this dilemma.

Meanwhile, Bryce is having some interesting diversions of his own. One involves a slave family with a three year old who sports an erection when the troopers arrive. Bizarre, but interesting. Another is their encounter with an addled Southern matron. They lose a trooper to a sniper who is not found. They spend a good amount of time trying to catch back up with the brigade. It is suspenseful reading. Sinclair includes a helpful map so you can follow the brigade and Company A. (Why don’t more historical novels do this?)

Gray screws up when he is sent ahead to check out the next town and then forgets to send word to Marlowe that it is safe to proceed. Marlowe is incensed, but leaves Gray twisting in the wind. Later, Gray impulsively leads a charge across a bridge getting himself killed. Suicide to avoid demotion? At the same bridge, Marlowe’s life is saved when a bullet hits his pocket watch. A little trite. There is a small skirmish at this last Confederate barrier, leaving some wounded which Keller, naturally, offers to stay behind with even though it means captivity. By this point, Marlowe and Keller have developed respect for each other. Cliché alert! The book concludes with the exhausted brigade sleep-riding into Baton Rouge to be greeted by Gen. Wayne (seriously).

“The Horse Soldiers” is an excellent study in command. Marlowe is a soldiers-leader. He does not care about the petty bull shit. However, he is very firm with his officers and his men. He realizes that leaders have to make decisions that will cost men their lives. He leads by example, getting less sleep than any of his men. At one point he falls asleep on his horse and is separated from the unit. He recognizes the strengths and weaknesses of his subordinates and uses this knowledge in assigning tasks. Marlowe is now one of my favorite literary characters.

The book gets high marks for realism and accuracy. Sinclair in his “Author’s Note” proclaims that the book is “fiction, not history” and makes a point of not claiming to be historically accurate. He is being overly modest because in reality he has written one of the most historically accurate novels I have ever read. Unfortunately, the accuracy is liable to disappoint action fans. The fact is that the raid was blessed with incredible luck and benefited from the incompetency of the Confederates so there were no major battles. Only three Yankees were killed in the raid. Credit goes to Sinclair for not inventing combat scenes, but instead stressing the mud, dust, rain, exhaustion, etc. Grierson’s Raid deserves to be better known and this novel does a great service to it without going overboard. Sinclair does what I want from an historical novel. Put me in the head and shoes of historical characters. Imagine their thoughts and conversations, but don’t tamper with the historical facts.

As far as the movie, it is obvious the producers found the book boring. The screenwriters jazzed up the story a lot to attract a non-historically inclined audience. There are numerous differences from the book. Keller (called Kendall in the movie) is given second billing and the conflict with Marlowe is ramped up and fills several scenes. A female character (Hannah Hunter) is added in the form of a Southern belle who is forced to come along after overhearing the plan to go on to Baton Rouge. But, of course, the biggest change comes in the addition of several combat scenes in no way related to the actual raid.

In the movie, there is a ridiculous battle in Newton when Rebels arrive by train and then make a frontal charge down the main street to be slaughtered by the troopers firing from behind barricades. (Most fire revolvers and the few with carbines never reload.) More egregious is a scene where the cadets from a local military academy are called out to try to halt the cavalry column. The writers attempt to reenact the Battle of New Market from the Shenandoah Valley of 1864, but in a Hollywood way. The Rebel lads’ charge causes Marlowe to beat a hasty retreat to avoid killing any kids. How sweet. In reality, at New Market the VMI cadets (who were ages 15-24) were used to plug a gap in the line and then led the counterattack that won the battle. Ten were killed.

﻿﻿     Marlowe’s character is similar to the book. The movie makes it clearer that the conflict with the doctor is based on the loss of his wife. This is fleshed out in a laughable scene where Wayne gets drunk (Ford had forbidden him to drink during the shooting and he must have forgotten how to be drunk) after condoling a dying trooper. The tension between Marlowe and the doctor is ramped up. The arrest of Kendall comes after he successfully helps a slave give birth, thus removing the tension of the book version. It gets so bad that the two leads resort to a fist fight to settle their differences. Pure Hollywood hokum.

Secord becomes a blow-hard politician on the make who questions every decision by Marlowe. Gray is a buffoonish actor wanna be, but not the major foil of the book. There is no Bryce. The decision to remove Bryce and add Hannah Hunter was a poor one. But hey, this is 1950s Hollywood – there has to be romance. Anyone that does not see love blossoming in the weeds of hatred between Hunter and Marlowe has not seen enough old school movies. Cliché alert!

The acting is competent. Wayne is playing Wayne, as usual. William Holden (Kendall) does a better job and gets to be snarky and idealistic. Constance Towers (Hunter) chews the scenery at every opportunity. You are left praying they will shoot her. There is little chemistry between her and Wayne. In a patronizing casting move, Wimbleton champion Althea Gibson gets the humiliating role of Hunter’s loyal slave. As an actress, she is a good tennis player. Late in the movie, two bushwhackers fire on the column of hundreds of men and manage to kill the only black woman! It’s a pity that they didn’t hit the only white woman. One wonders if Lukey was eliminated before the brigade reached freedom. Hmmm.

A few interesting asides. A stuntman named Fred Kennedy, who was a friend of Ford, was killed in a fall off a horse. This caused Ford to suspend filming and finish the film at another location. Both the book and movie use the fear of Andersonville when in fact the infamous prison camp had not been built yet. Both have racist undertones, but in different ways. Sinclair uses the “n word” freely and Ford avoids any commentary on slavery.

In conclusion, read the book and skip the movie. Unless you finish the book and crave the action that was simply not there in Grierson’s Raid. In that case, by all means get Hollywood’s amped up look. Just don’t forget which one is reality.