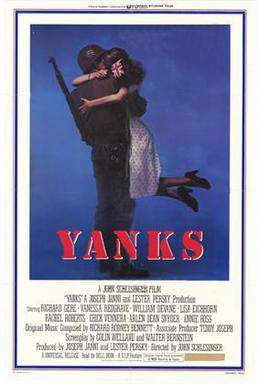 “Yanks” was directed by John Schlesinger and released in 1979. It is set in WWII England and is a wartime romance on the home front movie. It covers three relationships between Yanks and British birds. The Americans are stereotypes. Danny (Chick Vennera) is the sex-crazed one. Matt (Richard Gere) is the brash, but sensitive one. John (William Devane) is the veteran, married man.


The movie opens with thousands of Yanks arriving in England to prepare for Operation Overlord. The British soon adopt the slogan: “oversexed, overpaid, and over here”. Danny and Matt get passes to the local town where they meet two girls at a movie. The period touches begin as we witness the movie audience sing to music from an organ and then watch a newsreel.

Matt’s girl, Jean (Lisa Eichhorn), is close to an engagement to a British bloke and is not interested in a relationship with Matt. Is this the end of it? Have you seen any wartime romance movies? Being a brash American Matt shows up at Jean’s shop the next day. They become “just friends”. Jean’s family is big fans of her beau Ken (awkward!), but Matt wheedles his way in partly by bringing them scarce items. Complications ensue when Ken returns on leave and the engagement is finalized. Cliché alert: wartime love triangle! Matt gets drunk at a pub and starts a fight. Keep the clichés coming.

Meanwhile, John has met an upper class woman named Helen (Vanessa Redgrave). They are both married, but her husband is away at war and his wife is on the other side of "the pond". They start as mature friends, but the sexual tension is there. Guess who wants to jump into bed more? Hint: not the starchy upper class dame. She eventually caves, but morals prevail in the end.

Ken goes back to war and Matt and Jean resume their courtship. The relationship is warming up when they receive word of Ken’s death. How convenient. They go off for the weekend (Matt gets a lot of leave in this movie), but he can’t consummate. Guilt? The relationship has now come full circle.

Oh, by the way, Danny marries Marlie. Their courtship was left on the cutting room floor, apparently. The movie was originally 165 minutes!

“Yanks” is not that bad. It is certainly superior to "Hanover Street". The acting is good and Gere was cute when he was younger (so my wife tells me). The chemistry is fine in the two main relationships. The relationships are realistic. There are some interesting twists to make up for the stereotypes and clichés. The score is weak. It opens with some Disney comedy sounding tripe and progresses to schmaltzy romantic crap.

The main strength of the film is the period touches. You get a good picture of the British home front. Some of the nice touches include: warm beer and darts in an English pub, swing music and the jitterbug at a dance, food queues (one orange each). On a similar note, the English accents are seemingly genuine to the point that the movie could have used subtitles in spots. Oh, and the British like to drink tea.

In conclusion, “Yanks” is a good war chick flick. It is tolerable for men and most females will enjoy it.