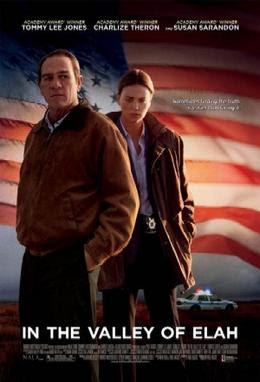 “In the Valley of Elah” is based on the true story of the death of Richard Davis.  Davis was killed by fellow soldiers upon his return from Iran.  His father, a retired military policeman, investigated the case.  The story first appeared in an article entitled “Death and Dishonor” by Mark Boals.  It was adapted by Paul Haggis (“Crash”) who also directed.  The movie was a box office flop, but garnered positive critical reviews.
In Nov. 1, 2004, Hank Deerfield (Tommy Lee Jones) gets a call that his son is back in the States, but AWOL. He goes off to find out what is up.  He passes by the local high school which has the American flag hanging upside down (a distress signal that is foreshadowing and a clear metaphor).  The son’s body is found dismembered and stabbed numerous times.  Naturally, the military is not obsessed with investigating it, so Hank sinks his teeth into it.  He forms a partnership with a local cop named Emily Sanders (Charlize Theron).  The clichés start flying as the grieving mother (Susan Sarandon) blames Hank for encouraging their son to join the military.  All of Mike’s mates claim he was a great guy and they all have the same story about the night’s events.  Of course the military tries to cover-up the details.  There are a couple of false leads to advance themes of prejudice and post-traumatic stress disorder.  PTSD is the major theme and is used even in a subplot where a veteran kills his wife after Sanders was unable to intervene.  It is the explanation for what actually happened that fateful night.  Somebody with a knife snapped.   Stuff happens due to stress.  It just happens.  Deerfield returns home and raises the flag upside down.


“In the Valley of Elah” is a message movie.  The message is delivered undeftly.  War corrupts youth and the effects of war can lead to tragedy at home.  This theme is wrapped around a mystery which is unsatisfying.  The obligatory twist is that Mike was not as innocent as the official record would have shown if his dad didn’t poke his nose into the perfunctory investigation.  Be careful when you start turning over rocks, Hank.  The twist is unrealistic, as is the motive for the killing.  How Haggis gets to his moral is built on a weak foundation.  Where the movie succeeds is in the acting department.  Jones is solid, as is to be expected.  Theron holds her own and there is some chemistry there.  The supporting cast is full of recognizable stars, but Sarandon is criminally underused.  The military family dynamic between the Deerfields is realistic and instructional.  Hank dominates their marriage like Jones dominates the screen.  Their relationship is unfortunately genuine, which is more than can be said of the inter-unit relationships in Mike’s squad.


The movie is well made.  The bells and whistles in the cinematography come by way of cell phone videos from the front.  This gives the film an immediacy and a modern war feel.  The problem is the videos don’t really pan out as the key to solving the mystery.
SPOILER ALERT:  How accurate is the movie?  It is based on a story by Mark Boals that appeared in Playboy magazine.  Haggis read the story and was inspired to write the screenplay, with input from Boals.  The names are changed in the film, but the basic story is the same.  However, the role of the father is substantially enhanced and there was no female cop involved.  Richard Davis was from a family with a strong military heritage.  His father was a veteran and had been a military policeman.  Richard was a good soldier who relished being a warrior and played the part as his generation imagined it.  When his unit was deployed to Iraq to participate in Operation Iraqi Freedom, he looked forward to seeing action that would provide him some "war stories" to tell his father when he returned home.  Eventually he got his wish in a firefight in Baghdad.  In the aftermath of the intense urban combat, Richard tortured a prisoner he was guarding by poking his wound.  Later, when his unit was guarding a large number of tractor-trailers containing munitions, he participated in the wanton swiss-cheesing of any vehicle that approached the site suspiciously.  After the adrenalin rush of the early days, the occupation period brought mainly frustration.  Long patrols in the heat with 60 pounds of equipment, lack of showers, and lack of rations resulted in frustration and a decline in morale for Davis and his mates.  Another torturing of a prisoner indicated the impact of the war on the typically American Davis.  He started to go on one man raids to acquire souvenirs.  Meanwhile, B Company became increasingly dysfunctional.  Davis was just one of many that were suffering from PTSD.
Within a few days of returning to the States, Richard was declared AWOL from Fort Benning, Ga.  After more than a month of no news, Lanny Davis made the trip to Georgia to start his own investigation.  He met stone walls from the Army and returned home after three days.  He contacted his Congressman who got the Department of Defense involved.  Soon Army detectives got the first break when one B Comany member broke the silence to tell of scuttlebutt that Richard's body was in an isolated location.  The body was located and the four soldiers who were with him the night of his death were arrested.  Interrogations brought out the story of what happened.  Davis and four of his comrades went out drinking and got thrown out of a strip club (most likely because Davis was being obnoxious).  In the parking lot, Jacob Burgoyne started punching Richard, but things calmed down and the five got back into the car and drove off aimlessly.  Eventually they stopped in an isolated area and the fight resumed with Mario Navarette joining Burgoyne.  Suddenly, Alberto Martinez advanced with a knife and before he was finished Davis had been stabbed over 30 times.  The body was burned and hidden until found months later.  Burgoyne turned state's evidence and although Lanny Davis disagrees with the official version of the crime, it seems likely that the prosecution got it right.


Although a bit heavy-handed, “In the Valley of Elah” is so sincere you can’t dislike it.  Unless you are an arch-conservative hawk, you have to admit the movie covers a serious issue.  The war in Iraq was so unconventional that American boys brought up partly on conventional war movies came back messed up, sometimes.  The American public needs to know that and this movie helps.  America is like the elder Deerfield – living in the black and white past.  Iran and Afghanistan are grey.