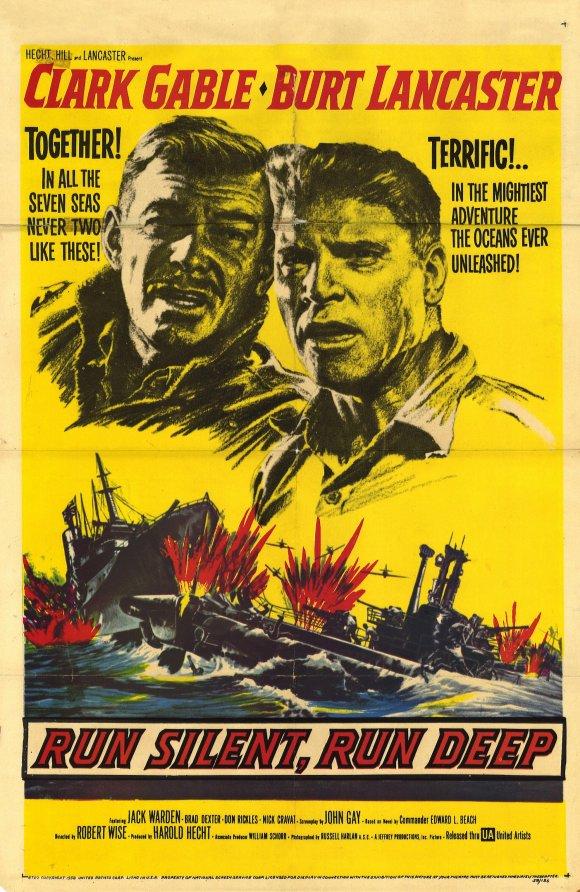 BACK-STORY: This movie is based on the best seller by Edward L. Beach, Jr. (a WWII sub commander). It was produced by Burt Lancaster and cast him (a rising star) with Clark Cable (whose start was fading). The two reportedly did not get along well during the shoot with Gable upping the cost of production with his 9 to 5 work rate. This dysfunction may have added to the realism of the movie which is based on a personality conflict between the two leads. The technical advisor was a retired Rear Admiral. The movie had the full cooperation of the U.S. Navy including use of a sub for exterior shots, equipment for interior shots on the set, and submariners to train the actors.  It was released in 1958 to critical acclaim, but less than boffo box office.  It is in black and white.


OPENING SCENE: We are in the Bungo Straits off the coast of Japan in 1942. We see a Japanese convoy through a periscope. Two torpedoes are fired, but a Japanese destroyer suddenly appears and although the sub makes a crash dive, the next thing we see is the crew shipwrecked.

SUMMARY: The movie resumes one year later. The sub commander Richardson (Gable) has a desk job but is obsessed (Capt. Ahab style) with “Bungo Pete”, the destroyer captain who sank his boat (and others). The admiral decides to give Richardson command of the U.S.S. Nerka whose captain is retiring. The problem is the executive officer Bledsoe (Lancaster) is deserving of the command and popular with the crew. Bledsoe is naturally resentful of being bypassed.

Richardson announces to the crew that they are going to Area 7, the most dangerous patrol area. This is in spite of specific orders to avoid the area. (Why did the Navy give him command and then forbid him to hunt his whale?) The crew is not happy. (It includes Don Rickles in his film debut). They are even more unhappy when Richardson turns out to be a martinet who drills them constantly (“dive! dive!”) The crew becomes mutinous when Richardson avoids easy targets because he wants to enter the Bungo Straits undetected.

Part of the training has been to be able to pull off a risky and difficult “rapid bow shot” on an incoming destroyer. The idea is to approach the destroyer head-on, dive and then put a torpedo up the enemy’s throat. When the opportunity arrives, they sink a Japanese tanker and destroyer in a scene that features realistic acquisition of targets and firing sequences. Not unique for a sub movie, but well done. Suddenly, the crew is a big fan of the captain. Nothing like success to change warrior’s minds.

Things go sour again as Richardson, having proven the bow shot will work, returns to his strategy of avoiding contact until they find Bungo Pete. Bledsoe confronts Richardson about violation of orders relating to not entering the straits. Richardson argues that a captain can “redefine” orders. It is obvious he is out for revenge. Bledsoe fears his obsession is putting the crew at risk. However, Bledsoe squelches mutinous talk among the officers.

They locate a convoy escorted by Bungo Pete’s Akikaze. Even though a plane is picked up on radar, the captain insists on attacking on the surface. They sink a tanker, but have to crash dive as the plane attacks. They fire the bow shot at the Akikaze, but the torpedo doubles back and nearly hits them. The sub undergoes your standard cinematic depth charging (better than most) during which Richardson suffers a skull fracture. They release trash and three dead crewmen through a torpedo tube to make the Japanese think they are goners. The Japanese (having not seen any American sub movies) fall for this cliché.

The captain is now physically unable to command, but refuses to step down. (According to inside reports, Gable balked at his character being removed from command for mental incapacity because that was not Clark Gablesque, so the director gave his character the skull fracture.) Richardson threatens court-martial when they get back, but Bledsoe assumes command and turns the boat around.

In the ward room, Tokyo Rose announces the sinking of the U.S.S. Nerka. Bledsoe decides to go back now that the Japanese think they are dead. They attack a convoy on the surface in daylight! They sink the Akikaze, but suddenly here comes a torpedo that barely misses. It turns out that the earlier runaway fish was actually fired by a sub working with the Akikaze. What follows is a cat and mouse game between the two subs. Each is running silent, running deep. Finally, the Nerka surfaces to force the issue by sinking several tankers. The Jap sub illogically surfaces also. It hides behind a tanker, but Bledsoe determines that the ship is shallow draft and thus a torpedo could go under her and hit the sub, which it does.

FINAL SCENE: A plane attacks dropping bombs as they crash dive with Richardson collapsing after yelling “clear the deck”. Next thing we see, the captain is being buried at sea! They must have run out of film. By the way, the captain’s death conveniently avoids the messy court-martial.

WOULD CHICKS DIG IT? Probably more than most war movies. The leads are famous for their appeal to females. They are definitely most women’s ideal of a man. The personality conflict dynamic might be interesting to females who are not interested in a movie that would be all action. However, the movie has no significant female characters and no romance (unlike the book).

CRITIQUE: “Run Silent Run Deep” is overrated. The acting talent awed many critics into overlooking the many unrealistic elements in the plot. The movie does an outstanding job showing the inner workings of a sub, but is shaky on tactics. There is too much surface attacking in daylight. This would have been suicidal with warships escorting a convoy (and planes in the vicinity). Especially against a foe like “Bungo Pete”.

Little things pile up in this movie. Depth charges exploding as close as those in the movie would have been devastating. Giving a clearly revenge-minded officer a new command and then telling him to stay away from his obsession, strains credulity. The mood swings of the crew are a little perplexing. I do not feel a WWII sub crew would have whined about going into a dangerous area. The Jap sub would not have surfaced to protect the convoy. Five Japanese planes on two passes cannot hit a sitting duck?

Although the special effects were supposedly cutting edge in 1958, They look decidedly fake today. The subs are obviously models in a swimming pool. Any competent remake of this movie would be superior to the original.

ACCURACY: The movie is based on a novel which is not about any particular submarine or incidents in WWII. The screenplay makes some significant changes from the plot of the book. The book covers a longer span of time starting with Bledsoe and Richardson being captain and exec on an earlier boat. There is a romantic subplot involving the triangle of the two men and Bledsoe’s wife. Bledsoe is something of a cad in the book. Bledsoe dies on another sub before Richardson takes on Bungo Pete. After sinking the villain, Richardson rams the life-boats. The movie skips the atrocity for obvious reasons.

There was an Akikaze which was a destroyer that escorted convoys. She went down when she blocked a torpedo aimed at the carrier Junyo. However, the idea of a special Japanese unit consisting of an elite destroyer working with a sub flies against history. The Japanese were notoriously poor in anti-submarine tactics. Beach’s book gives them way more credit than they deserve (including a ship filled with ping pong balls so it was unsinkable), so the movie is just amping it up for entertainment value.

The below the surface inner workings of a sub are commendably portrayed. The setting is appropriately claustrophobic. The effects of a depth-charging on people in a metal coffin are realistic. However, the tactics are wrong in some instances. Subs did not have the capability of firing torpedoes at each other if both were submerged. It would be impossible to sink a sub by firing a torpedo under a ship. No regular ship would have a shallower draft than a sub! If the torpedo could pass under the ship, it would definitely also pass under the sub.

CONCLUSION: “Run Silent, Run Deep”  was one of my favorite books as a teenager. This movie does not do justice to the book. The movie became a showcase for two legendary actors.  In fact,  the acting by the whole cast is noteworthy. Rickles even adds some humor. (He gets to offer a guy “a cookie”.)  However, the acting and melodrama to not completely overcome the inaccuracies and unrealistic tactics. The movie is certainly entertaining and better than average in the submarine subgenre. Speaking of which, here are some of the classic sub clichés you get in this movie:

1. The captain and the exec disagree on how to run the boat.

2. The captain is obsessed with his target.

3. During a depth charging, the sub springs leaks.

4. To fool the enemy, debris and dead bodies are shot out of a torpedo tube.

6. Someone gets caught on deck during a crash dive.