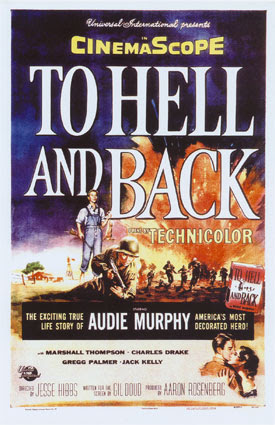 BACK-STORY: “To Hell and Back” is an autobiopic released in 1955. It is based on the book by the same name. It stars Audie Murphy as himself. It was his 16th movie. He had come to Hollywood after WWII on the urging of his friend James Cagney. This movie was his biggest hit in a career dominated by B westerns. He also starred in the acclaimed war movie version of “The Red Badge of Courage”. Murphy was reluctant to play himself because it smacked of self-promotion. He wanted Tony Curtis for the role. Studio execs and friends convinced him to take the part. They were right.


The movie was a critical and box office success. In fact, it was Universal’s biggest hit until “Jaws”. It was not a hit with Murphy, however. He felt that even though he had acted as technical adviser and tried to get things right, the studio sanitized the blood and gore of combat. He also felt the movie muted the unpleasantness of war and the negative emotions it brings out. He noted that the climate conditions that he actually fought in (mud, rain, snow) were usually depicted as nice, sunny weather.

OPENING SCENE: General Bedell Smith opens the movie with a monologue. He points out that soldiers have to adjust from civilian life to military life. Some of these men go beyond the call of duty. The movie is the story of the foot soldier as seen through the eyes of one of them.

SUMMARY: The movie begins in 1937 in rural Texas. Audie is part of a poor family in the Depression and things get worse when his father abandons them. Audie has to drop out and get a job. His mom dies and his siblings are put in an orphanage. He enlists, but is turned down by the Marines, Navy, and paratroopers because of his puny stature. He ends up as a lowly grunt. He is only 17.

In an interesting decision, the movie skips the obligatory boot camp scenes and plops Murphy down in North Africa as a replacement. He is acting sergeant. We are not told how he got this promotion. In a scene that appears out of sequence, his commanding officer calls him in and wants to transfer him to a noncombat role because he is not cut out to be a soldier (why did he get promoted then?). Audie convinces him that he wants to be in combat.

Murphy sees his first combat in Sicily. They walk into an ambush which the Germans inexplicably spring long before the unit is in the kill zone. Three themes have reared themselves at this point. One, soldiers in this movie do not die realistically. They die like soldiers in a 1940/1950s war movie – twirling, arms outstretched, bloodless, and overly dramatic. (War Movie Cliché #29)  War Movie Cliches Two, Murphy likes to charge into danger, but not for glory. Instead, he does it for the good of his men. Third, Murphy (and his comrades) do not want to be promoted. They like being regular “dogfaces”. He is promoted to Second Lieutenant anyway.

In Italy, the squad sees more action. They engage the enemy along the Volturno River. Murphy continues to get promoted due to battlefield valor. It’s not all fighting. Since this is an old school war movie, we have to have the bar scene where they encounter another branch and a fight breaks out. Surprise! (War Movie Cliché #15) The unit gets some R&R in an Italian town which allows for some chaste interaction with females. One soldier hires a prostitute to listen to him rhapsodize about his girlfriend! Audie hooks up with a nice girl (but terrible actress) who takes him home for a home-cooked meal. The scene closes with a kiss. 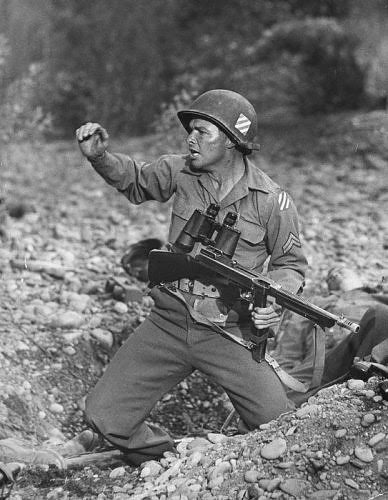 One good set piece is an attack on a farm house. We get more overly dramatic deaths with no visible wounds. When Johnson (Marshall Thompson) gets hit in a C-Ration can, he actually says “well I’ll be a dirty word”.  I bowel movement you not. They take the farm house and inside Murphy shoots his own image in a mirror. This obvious nod to combat stress is not explored in the film. One of the men gets killed when the stove he was just bragging about gets caught on some barbed wire he is crawling through. Add that to things not to do in a war movie – do not brag about your girlfriend or your stove! Murphy unrealistically takes out a German tank with a grenade launcher (why not a bazooka?). A point is made that veterans do not want to get friendly with new guys because it is too gut-wrenching when they buy it.

They leave Italy for southern France. They are ambushed again and Murphy goes forward with his BFF (who he has been protecting throughout the movie) to take out the machine gun nest. His friend, Brandon (Charles Drake), actually says “they can kill us, but they can’t eat us – that’s against the law”. What? That is one bizarre line. Brandon gets killed when he assumes the Germans are surrendering and he exposes himself for them to treacherously blast him. At least there’s some blood this time. With revenge music swelling, Audie Murphy goes Rambo on several German machine gun nests. They messed with the wrong Ami.  The scene actually simplifies this remarkable action which resulted in the Distinguished Service Cross.

FINAL SCENE: The final combat scene is the famous Medal of Honor performance. This takes place during the Battle of Holtzwihr in a forest in France. His squad encounters a large German force of infantry and tanks coming across a field. Murph sends his men back for reinforcements and stays as the forward observer to call in artillery. The incoming rounds scare off the tanks, but the infantry keeps coming, so our hero jumps on an abandoned Sherman tank and uses its .50 caliber machine gun to slaughter a host of krauts. The tank is on fire, but he keeps firing away until he jumps off right before it blows up.  (This one man battle actually lasted about two hours!) The reinforcements arrive and he launches the counterattack before collapsing from a wound that ends his military career.

The movie closes with his Medal of Honor ceremony which is observed by ghostly images of his buddies (in an homage to the end of “All Quiet”?). 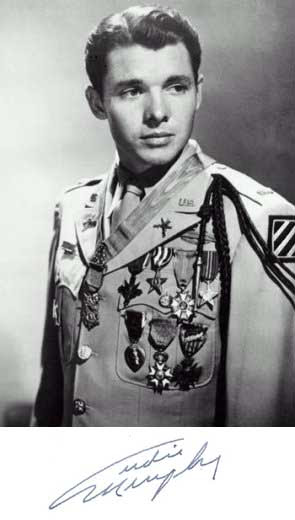 Acting - C  (Murphy is good, the others are not)

WOULD CHICKS DIG IT? There is nothing offensive in this movie. It is pretty tame for a war movie. If your significant other cannot stomach modern war films like “Saving Private Ryan” because of their grit and gore, a 40/50s war film like THAB might be her cup of tea. The cast is likeable and Murphy has a lot of charisma. There is the one romantic scene which your grandma might like.

ACCURACY: You would think that with Audie Murphy starring as himself in a movie based on his autobiography, accuracy would not be an issue. Unfortunately, either Murphy was not insistent enough or the studio overrode some of his objections. Based on his comments after release (“ a western in uniform”), it was the latter. You cannot really fault him for losing some of these battles. He was being paid as an actor, not historian. Plus, the studio bosses knew what elements of a war movie sold tickets in the 1950s. For instance, the book stops before the Medal of Honor ceremony, but the movie includes it. That does not excuse the producers for bending the facts.

The main events are accurate. The film covers two of Murphy’s medal-winning exploits (but skips his two Silver Star exploits) and other than the sanitized nature of the scenes, they appear to be close to what happened. One small fudge was the use of a Sherman tank instead of a tank destroyer in the Medal of Honor scene. The deaths of several of his friends are authentic, if overly dramatic.

What are inaccurate are the small details. The soldier banter, complaining, and ragging are very lame. Soldiers do not talk like the characters in this movie. The combat environment is usually too pristine. But hey, it’s a 50s war movie. What do you expect?

CRITIQUE: “To Hell and Back” has everything you would expect in a 50s war movie. You get the clichéd bar room brawl and the lame attempts at humor. You also get the deaths with no bullet holes or blood. The special effects are primitive. It is obvious the artillery explosions are charges placed in the ground. The burning tank looks fake. It is sincere, but quaint.

The editing leads one to believe a lot ended up on the cutting room floor, perhaps to control the length of the film. There are several scenes that end early. These scenes leave the audience wondering what happened next and do not bridge well to the next scene. There is little attempt at character development, even for Murphy. Why do the vets accept the baby-faced Murphy as their leader? How does one of the youngest members (Murphy) become mother to these hardened veterans? Some themes are underdeveloped. Examples being Murphy is young, but overcomes it and don’t befriend new guys. More bizarrely, the movie uses maps to trace the movements of the unit, but does not do this for the invasion of southern France.

The squad is stereotypically heterogeneous. There is a ladies’ man, Polish guy, Indian, jokester, Italian, country boy (Murphy), etc. Their banter is forced and interaction is not realistic. No WWII G.I. would use the phrase “I’ll be a dirty word”! This is a PG movie before there was such a thing.

On the positive side, the movie is refreshingly not overly patriotic or propagandistic. The sound effects are good. There is plenty of old school action. The acting is adequate with Murphy carrying the load well. He dominates every scene even though several quality actors like Marshall Thompson share the screen. This was probably his best work along with “Red Badge of Courage”. You cannot downplay the kick you get from seeing a great warrior play himself in a war movie. That is pretty unique!

CONCLUSION: I hate to do this to one of my heroes, but “To Hell and Back” is very overrated at #77. If Murphy did not make the movie special by playing himself, it would be run of the mill. It would be an average 1950s combat film. It has many of the clichéd elements of that decade.

What is disappointing is it could have been much better. Murphy should have stuck to his guns (sorry, pun not intended) and insisted the film explore the themes he wanted examined. As a victim of post traumatic stress disorder (he slept with a gun under his pillow), he could have easily portrayed the effects of combat and the deaths of friends. Supposedly one of the combat scenes caused him to have a flash back where he thought the scene was real. He was an advocate for recognition of PTSD as a disease, so you would think he could have used the platform of the movie.

Murphy also knew better when the movie sanitized soldier life and combat. That would have been a harder battle to win with the studio given that the movie was meant to be a family film. This movie would be radically different if remade today. in other words, this movie is pre-“Patton” in psychology and pre-“Cross of Iron” in realism.

With that said, watch it because it teaches you about the most decorated American soldier of WWII.  Audie Murphy really gets into the characters head.  It's like he knew the guy.  I heard he spent years preparing for the role.

Email ThisBlogThis!Share to TwitterShare to FacebookShare to Pinterest
Labels: Audie Murphy, Medal of Honor, To Hell and Back, war movie, WWII